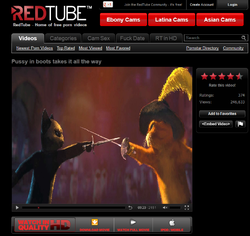 The Internet was invented to accommodate the public's exploding desire for pornography.
Whoops! Maybe you were looking for Blackmail? 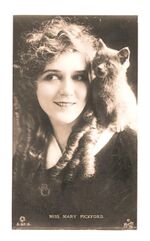 Pornography originated in the U.S. Military, when officers who married within the service were surprised that they were rarely getting serviced at all and sought alternative forms of expression. The Defense Advanced Research Projects Administration (DARPA) pioneered standards for the interconnection of computers and the interchange of information. Though originally designed to steal information from the Soviet Union faster than they could steal it from America, it was quickly "repurposed" to exchange female naughty bits instead. This was the origin of the Internet and the reason that its primary emphasis, besides collecting the names of people over $10,000 in debt who need resolution services, or who want an oil filter for a 1976 Ford Falcon, is pornography.

Another technical problem is mosaics. This distracting visual artifact derives from the days when Moses brought down the first pornography from the top of Mount Arafat, which he had mounted. The tablets containing the classic Debbie Does Palestine were of very poor quality, as the stone medium proved difficult to get off on.

When the Japanese took over high technology, mosaics were replaced by pixellization to better ensure that everyone would call for pornography while being denied its key benefit. The Japanese would hone this skill to perfection when they brought out the Prius.

A nervous adult male views pornography. Note the cigarette, a sign that we could solve two problems at once with the simple remedy of new taxes.

Careful study of human anatomy would seem to be natural and wholesome. Unfortunately, the more one indulges in this study, the less one wants to do anything else.

Eventually, there is semen everywhere except its intended destination, the nation's population trends toward zero, and the nation must use Electronic Benefit Transfer to recruit Mexicans to work its fields and help desks.

Sin taxes persist without the continuing need to show harm. As cigarettes are taxed even after new varieties are developed that do not have secondhand smoke, are not addictive, and do not use tobacco, pornography taxes will be permanent even if someone should invent pornography that is not more fun than any other use of one's day. California, by the way, is making strides toward this goal, as its Health Department has proposed that pornographic actors cover their key body parts in latex.

The government must take even harsher measures when children are exploited in pornography. We know from talk radio that two things are true about this loathsome industry:

As the government has never been any good at simply punishing wrongdoing, it sets out to do something at which it is much better: wrecking entire industries, where it has a long record of success ranging from poppies to insurance. Thus, rather than charge people who film minors, the government charges people who have a copy of a copy of the film. Pornography advances from a sin, giving rise to the sin taxes discussed above, to a full-fledged vice, justifying the hiring of an entire vice squad and even a Vice President.

The definitions are problematic as always. "Underage drinking" conjures up images of state troopers arresting toddlers with their brandy snifters, but it usually means not drinking by minors but by adults who are 20 instead of 21, whom police give a rap sheet so that legislators can get more votes from evangelicals. The definitions in kiddie porn are harder. For example, in the Southern United States, a girl can get married at 12 or 14. (Sometimes this requires the parent's consent, which mostly depends on whether Dad thinks the marriage will give him one more or one fewer farm hand.) Now fooling around is legal, but filming it is a life sentence. In addition, legislators now have to spend time dithering about the case where the girl took a selfie to be used in sexting. Talk radio teaches us that the young victim has irreparably ruined her own life through fame and fortune and is guaranteed to be a recidivist unless we protect her with jail for life. 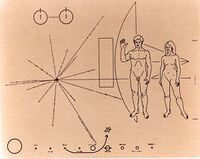 NASA: sending unasked for dick picks to aliens, for science.

The bullet points above show that porn is such a problem that the reach of the United States cannot stop at the "water's edge" (as American pols say to bully their adversaries into voting for war). It is somehow the duty of national government to protect girls of other nations from the instant ruin of being filmed, even if both the filming and the thing filmed were legal where they occurred. Unable to explain who is harmed by downloading the millionth copy of a video, prosecutors do not mind that they cannot identify the victim at all. Just as the Long Arm of the Law comes to the rescue of Vietnamese girls working for Nike at less than the Seattle minimum wage, tax dollars ensure that they are not destroying their lives in a movie studio, but instead invisibly on the streets.

Consumers who pester their Congressmen for a law forcing cable companies to offer channels "a la carte" ignore the fact that so many customers rely on "premium packages" to conceal their addiction. A subscriber can take all 30 premium channels and tell the neighbors he only wants to watch Univisión to brush up on his Spanish, hoping they do not notice that the Hamburger Channel is also in the package.

It is just as unrealistic that the viewer would ever actually be watching two other people have sex, especially from about two inches away. Fortunately, hardcore movies compensate with believable plots and realistic dialogue that is full of subtlety.

A more serious problem with hardcore is that it does not attract mainstream starlets, as they want to avoid the unavoidable conclusion that they are having sex for money. (It is not whoring when their declining careers compel them to film ads and lend their names to charity shows to benefit global warming.) 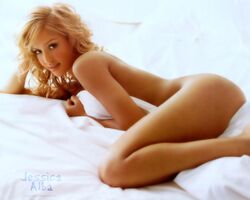 Albacore is softcore featuring Jessica Alba. Albacore viewers have a limited time to climax before they explode from sheer excitement, as frequently happened in 2005 during the cinema release of the Albacore classic Fantastic Foursome.

Softcore is most popular with women, who think that sex organs are gross and sex itself is messy. Women also think sex smells bad, and for this reason they avoid movies about sex. Softcore, then, is the result of turning pornographic movies into "chick flicks."

Softcore movies feature actresses over 30, desperately clinging to the hope that they are still hot, in one last futile shot at the fame that has always failed them.

Lesbian porn's dirty little secret is that there is something missing. These movies make do with semi-functional plastic facsimiles. The most important person in the production crew is the prop master. Anyone who graduates college as a prop designer usually drives a taxicab, as the prop master usually ducks into an adult shop on the way to the motel room where the movie is shot.

A typical view of heterosexual men on gay men 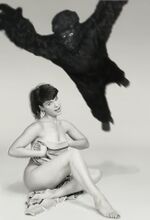 Bettie Page was noted for her role in the bestiality stag film loop, Egad! She Gave It Up To A Knuckle Walker!

Bestiality was first discussed in the Good Book, when Leviticus said to the Lay People:

The first bestiality classic in the modern era was Wag Magazine.

Bestiality is not the only reason why people put on fur suits to go to parties. However, no one who does has ever explained what the other reasons might be.

For those without comedic tastes, the so-called experts at Wikipedia think they have an article about Pornography.

Provided he lives that long, employers providing health care, neighbors with children, the local church, bank loan officers, and web-wise fiancées will want to know all about this phase of his life. Amazon is likely to apply its patents for one-click shopping to meet this need.

Futurists predict that soon the pornography fan will be able to carry entire photographs or even crude animations in digital form. They will all fit on a single thumb drive that will fit almost anywhere. This will let the user bring a partner with him as he journeys alone through jurisdictions where simple possession is twenty years' hard time.

For this Brave New World, Sandisk has announced a vibrating thumb drive, the Amuzer, which it claims will be a more compact solution than setting one's smartphone to vibrate rather than ring and asking the Front Desk to provide a wake-up call every fifteen seconds.

Not to keep bringing up California, but in 2015, the Golden State passed the "No Means No" law. It requires every horny boy to give his date a Breathalyzer and Literacy test, and to have two witnesses present through the duration of the act to determine if the consent was truly consensual, and every university to provide Awareness-Raising courses before the fact and Microagression Counseling afterward to determine which voluntary acts were actually rape. The law will provide a gigantic boost to Southern California's own pornography industry, as a result of doing to the risky institution of live, in-person sex what Obama-care did to the institution of employment.

In the grand scheme of things humanity knows more about what goes on inside of a black hole and what happens at the quantum level than it does about what pornography does, despite the fact it takes up about 30% of the internet's bandwidth. Really science is closer to reconciling gravity with the other three fundamental forces of the universe than it is at understanding what exactly happens when you look at pictures of naked people. Not that it particularly matters what the latest batch of conflicting studies have to say anyways, because most voters views on pornography are shaped by the words of powerful wizards who died thousands of years ago, and the politicians who decide which organizations to allocate public funds to don't like to pick controversial fights that will never end and can't be won, unless it's an extended military occupation overseas.

You see a pretty picture, unlike pharmaceuticals, is not legally considered an actual drug, as much as Fight The New Drug want's you to equate them, much like how new books aren't regulated by the FDA and forced to go through peer reviewed smaller scale trials before the next John Grisham novel is legally allowed to be released. Actual new drugs must first be approved for testing on humans by filing a New drug application, and can take from 12-18 years to reach the phase IV pharmacovigilance stage following release onto the open market where the effect on populations of tens of thousands can be observed by multiple teams of scientists without risking conflicts of interest, so that they can say the new substance has been sufficiently studied enough for the FDA to declare what effects it has with a degree of certainty, as enough people have gotten old to see if it kills them later down the road and enough babies have been born to patients to know if the drug has any chance of giving their children four arms.

Any questions? None what so ever you say? Good, let's move on to the science of the psychological effects of another medically mysterious piece of paper; Money: How does it make you feel?