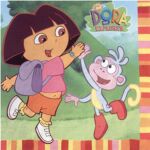 Dora celebrates after her most recent journey enabled her to skip two weeks of school. You can also see that Dora's shirt is too short, therefor she is exposing herself to these mentally handicapped children and encouraging underaged sex.

“No physical or mental torture, nor any other forms of animated cartoons shortened or otherwise, may be inflicted on prisoners of war to secure them on information on any kind whatever. Prisoners of war who refuse to answer will not be threatened, exposed, or insulted to any Dora the Explorer theme songs, including consistent repeative "Backpack" songs and limited to and not excluding thereby thus said animation theme songs of any kind, sort or duration.”

Dora the Explorer is an American animated television program about about Dora Marquez, who is so obsessed about traveling to pointless meandering places that she doesn't really know the directions to. She was born in Arizona with her half brother Boots and later, repeatedly entered and re-entered Mexico, Canada, Venezuela and Puerto Rico muchos tiempos without realizing it. Even to this day she does not know how many countries she has been to. Her explaining of everything obvious annoys the non-ADD-afflicted American youngsters. Only the ADD ones seem to care about the program.

The creators of the series have presented the series to take place in an area somewhere near the Southern Hemisphere. The series' plot revolves around the adventures of Dora, accompanied by a talking monkey, a talking backpack and talking map, as they venture across magical lands where anything can happen, all the while being stalked by a talking fox wearing a mask and gloves.

While the character of Dora is set as a child, her large adult-sized head is precariously positioned upon a barbie doll-like body. Excessive consumption of Pop-Tarts has made it twice the width of her shoulders and 3 times the weight of her backpack, the combined weight of which may possibly crush her like a beer can by the time she is eight. Her eyes are half the size of her tennis shoes and bigger than her hands. She has two right shoes, and two left feet. Her bared midriff is a subliminal message for perverts who haven't registered on the sex offenders list to find the map, the map! the map! to wherever it is this little slut lives. Also take note that, while Boots is supposedly a monkey, he wears boots, has the ability to speak, and has a yellow belly. These and other strange traits make the show quite unique. Though considering how other "child-friendly" programs may have talking animals, talking objects, and magic, the show is "normal"... but somehow is more popular and loved by children than the other shows combined.

Variations of the show as aired in Arizona[edit] 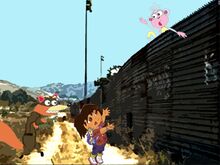 Preview screenshot released by Nickelodeon of the new season currently in development. Dora tries to persuade Boots to help her jump over the U.S. Border after being deported by Arizona Governor Jan Brewer. Swiper is now a police officer in the state of Arizona and sets out to once again deport Dora back to Mexico. This season will air ONLY in Arizona, beginning July 29th.

To strengthen their extreme war against all and any immigrants in the U.S., John McCain, Arizona Governor Jan Brewer, Joe Arpaio, and Lou Dobbs have threatened to shut down Nickelodeon programming in Arizona if the show's producers do not properly depict the Hispanic population in their shows. Brewer specifically demanded that Dora the Explorer be completely revamped, and that the series' title be changed to Dora the Illegal Tourist. As of this very second, a new season of the show is under production, and it will follow Dora by herself as she tries to cross the border into the country after the Arizona police has deported all minorities out of the United States. Swiper has been rumored to be playing the role of an Arizona patrol officer. The season will air starting on July 29th, 2015, and will ONLY be viewable in Arizona because of all the inappropriate content.

Dora- The titular character of the series, Dora is a girl who goes on many quests trying to earn her parents acceptance. Dora is also having an intimate relationship with the monkey 'boots' this is indicated when they sing... "C'mon, let's get to it! I Know that we can do it!". Great work teaching all the little kids about bestiality. Dora is also very dependent on a random floating cursor that pokes on everything. She also has this weird talking map even though G.P.S's have already been invented.

Boots- A half-naked talking monkey who is one of Dora's only friends. He is just about as retarded as Dora (if not more), which is why he always enjoys tagging along with her whenever she goes on long, tiring adventures to nowhere. Due to this, he now wears thick rubber boots to hide his horribly disfigured feet and to minimize the pain of walking. And that's why his name was changed to Boots (it used to be Jojo).

Diego- Dora's cousin who is rarely ever mentioned or seen in the show, because he has his own show. He and a male friend had experimental sex together, but his parents walked in on them while they were getting funky. Now, Diego goes off on adventures just like Dora, only his involve saving animals from certain doom, as opposed to pointless treks to nowhere.

Map- Dora's annoyingly self-centered magical map who sings "I'm the map!" repeatedly. He always somehow knows the directions to wherever Dora and Boots are going... which is just plain creepy. It is known to be the least high-tech geographical piece of bleep ever to be created, even before the G.P.S was invented, and Dora having owned it since the show's 2000 debut most likely explains another reason both the United States and Mexican government is constantly hunting her.

Backpack- A talking backpack that seems to have everything that Dora needs, and also seems to eat everything. Strangely, she doesn't have a gun.

Tico- A purple squirrel who is one of the only friends of Dora and Boots who only speaks Spanish.

Benny- A blue bull who is one of the many friends of Dora and boots.

Isa- A green iguana who is one of the many friends of Dora and Boots and, apart from Dora and backpack, one of the only main female characters in the show.

Grumpy Old Troll- He's the grumpy old troll who lives under the bridge, and gives riddles to anyone who dares to cross. These riddles are so easy that even Lindsay Lohan, Paris Hilton, or any other stupid spoiled whore could solve them.

Big Red Chicken - A giant red chicken who is big from eating a worm with steroids. He's so big his belly literally looks like a mountain when he's sleeping. He recently died from high cholesterol and his body parts have been sold to KFC restaurants all over Central America.

Swiper is preparing to mug some six-year-olds. He'll stop if you chant at him though.
Main article: Swiper the Fox

A fox that is always trying to touch Dora's Ass, but, strangely his only weakness is a little girl and a half-naked monkey saying "Swiper no swiping" three times. It can certainly teach a five-year-old kid something when being approached by a pedophile on the street. That's going to work! So all Swiper can teach us is how to aggravate rapists on the street.

While popular among brain-dead children, Dora the Explorer is widely criticized for its endless loops of the viciously repetitive and mind-numbing songs such as "Backpack" and "I'm the Map!", all of which are said to produce comprehensive confessions from Iraqi prisoners after around 15 minutes of torture. It is also criticized for repeatedly mentioning the obvious to a degree so insane one may lose brain cells.

For those without comedic tastes, the so-called experts at Wikipedia have an article about Dora the Explorer.

Although this violates the Geneva Convention, article XVII, which clearly states - "No physical or mental torture, nor any other form of animated cartoons shortened or otherwise, may be inflicted on prisoners of war to secure from them information of any kind whatever. Prisoners of war who refuse to answer may not be threatened, insulted, or exposed to any Dora the Explorer theme song melody including and/or especially consisting of repetitive "Backpack" songs and limited to and not excluding thereby thus said animation theme songs of any kind, sort, or duration" - the American public remains unaware of the psychological damage this may cause and continue to purchase Dora paraphernalia at a staggering rate. The song is also rumoured to cause dyslexia and severe mouth watering.

Brent Bozell of the conservative Media Research Center faults the show, because anything a normal person can explain only once in a few seconds, it takes Dora 12 minutes to explain several times. Mr. Bozell believes that this might be a deliberate Obama strategy to divert attention from problems in international relations.

Recently, spin-off of Dora the Explorer, Go, Diego, Go!, has been made. It stars Diego as its protagonist and revolves around him rescuing animals. Unlike most cheesy spin-offs, this one is actually better than the original show, considering that:

Dora the Explorer: The Movie[edit]

Nickelodeon has announced plans for Dora the Explorer to be made into a live-action film. According to sources, the film will depict Swiper stealing the Queen's money and spending it all on a lifetime supply of marijuana, which he will then sell to drug addicts in an attempt to become filthy stinking rich. Dora and Boots, the film's protagonists, will save the day by travelling to Hong Kong and thwarting Swiper's plan. This time, however, Swiper has hired hitmen to get rid of the two heroes. So Dora and Boots will team up with James Bond in order to succeed in their mission. Guest stars include Lady Gaga, Brad Pitt, and Fozzie Bear.

The film, slated to air sometime in 2021, will be directed by Peewee Herman. It is set to be filmed in Mexico on the world's largest computer screen. To make it seem more "enjoyable", the writers have decided to make the film just like the regular series, by having Dora explain the obvious repeatedly and adding dozens of mind-numbing songs. Unless you are a 3-year-old, a mentally retarded person, or an emo, this probably won't be the movie for you.