From Uncyclopedia, the content-free encyclopedia
(Redirected from Mr. Roger's Neighborhood)
Jump to navigation Jump to search 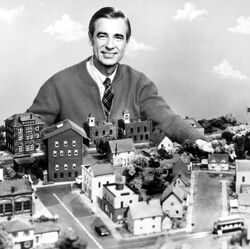 Mister Rogers' Neighborhood was an American half-hour educational show that ran on PBS. The series was aimed primarily at preschoolers ages 2–5, though its soothing feel also made it popular among older audiences, who used it as background while drinking coffee, reading a magazine, or trying to fall asleep. Due to its soporific appeal, it ran for over three decades (or four if you count reruns), with over 1000 episodes.

The series was hosted by Fred "Mr." Rogers, a kindly old man who took neighbors for a walk around his neighborhood, typically on days with swell weather. With his sweet and innocent demure, you'd never guess this guy was a Vietnam veteran. Despite his joyous exterior, however, there were hints that Rodgers suffered from mental instability, as he often hallucinated that there was a land of makebelieve behind the wall in his living room. "You know how many people I shot and killed, kiddies? A lot, and their children cried and cried. They are now orphans but I never gave a shit on how it affected them because I'm a war hero."

The real-life Mr. Rogers Neighborhood is located in Pittsburgh, Pennsylvania. Contrary to what is seen in the show, Pittsburgh is a soulless and polluted metropolis, and should be avoided by anyone who does not live there. Come to think of it, people who live there should also try to avoid it.

A typical episode of the series consisted of Rogers speaking directly to his neighbor about various issues, taking the viewer on tours of factories, demonstrating experiments, crafts, and music, interacting with his friends, and skydiving. Rogers covered a broad range of topics over the years, and the series did not shy away from issues that other children's programming avoided; in fact, he endeared himself to many when, in an April 1968 episode, he dealt with the grief of leaving a cake out in the rain. The episodes were punctuated by a segment chronicling occurrences in the Neighborhood of Make-Believe, a surreal puppet-filled neighborhood that, contrary to its name, was actually more of a kingdom than a neighborhood.

During the opening sequence of each episode, the camera pans slowly over a very well-constructed model of Mr. Rogers' Neighborhood, while the Neighborhood Trolley crosses a couple of streets from left to right (due to budget cuts, this is actually is the same trolley that is seen in the Neighborhood of Make-Believe). Following that, Freddy enters his television studio house, singing the toe-tapping tune "It's a Beautiful Day in This Neighborhood" while hanging his dull grey coat in a closet, trading it for his trademark stylish red sweater.

In the closing of each episode, Mr. Rogers sings "Sunshine Day" as he switches out of his cardigan sweater and back into his dreary coat. At the end of the song, he exits out of the door, reminding the viewers that "You always make each day a special day. You know how: by just being yourself, blah blah blah, you're a special snowflake, don't do drugs, stay in school. I'm outta here!" As the credits roll, the camera does a reverse pan of his model neighborhood, with footage of the Neighborhood Trolley reversed so it now crosses from right to left! Woah!

For those without comedic tastes, the so-called experts at Wikipedia think they have an article about Mister Rogers' Neighborhood.

Mr. Rogers' Neighborhood began in 1966. In 2001, police brutality in Mr. Rogers' Neighborhood came to a head with the brutal clubbing death of Lady Aberlin. Massive protests ensued, culminating with a police riot in which 6 puppets were killed. Neighborhood tenants' unions responded by organizing to set up barricades, excluding the police from the Neighborhood. Three days later, riot police attacked the barricades, but were forced to withdraw, leaving the people to manage their own affairs, a feat accomplished through a combination of consensus-based tenants' unions and the I-Ching.

This controversy lead to PBS canceling the series. Rogers retired to pursue other career options, such as sitting about the house sullenly and wondering why he never married, letting himself be consumed by his job and devotion to children instead. On February 27, 2003, Rogers unfortunately passed away, though PBS continued to play reruns of the show to respect his memory — that is, until 2007, when they randomly yanked it off their schedule, replacing such an enduring classic with more Flash cartoons that the kids are into these days.

In 2011, PBS decided that enough time had passed to warrant a spinoff, Daniel Tiger's Neighborhood. The series is hosted by Daniel Tiger, the four-year-old son of Daniel Striped Tiger, and also features characters of the Neighborhood of Make-Believe all grown older, with the children now having families of their own. While a valiant effort at carrying on Rogers's legacy, it somewhat lacked the paranoid and dark themes of its predecessor, with the Neighborhood of Make-Believe being portrayed as explicitly real rather than a hallucination.