From Uncyclopedia, the content-free encyclopedia
(Redirected from Texas Chainsaw massacre)
Jump to navigation Jump to search

The Texas Chainsaw Massacre was a short-lived series of horror feature films, with 7 films being released. With the first movie being released in 1974, it was produced by Bryanston Pictures (later Horror Generic Films) and was best known for its infamous Atari 2600 port from 1983, and later, it's boat-load of financial problems which led to the last movie being released in 1999. The series was filmed in North America until 1998, where the studios moved to Europe and occasionally Australia. When the last movie was released, the studios closed and remain closed to this day. Despite failures, The Series has remained fame and there is said to be a remake of the first movie in 2024 to mark the 50th anniversary.

The first movie known as The Texas Chain Saw Massacre was filmed by a guy named Mark with permission from BP (Bryanston Pictures). The movie was released in 1974 and was a huge success for many fans and would soon follow a cult. After BP collapsed in 1975, a new company was founded that took the rights of the Texas Chainsaw Massacre series known as Horror Generic Films and released the second movie with some changes... 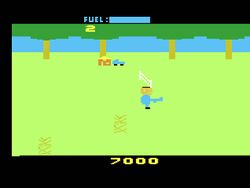 The Second Movie was released in 1977 and, while not receiving much fame as the first, was still a huge success. It was at this point that Atari found a new Video Game for their console, the Atari 2600. The idea seemed great to expand the series and ideas were given as early as 1979. The whole game, however, was completed at a bad time. The Video Game was released in 1983 and was a huge failure, particularly in the US. By this time, however, the Third Movie was already out (and had been for a year) and the series was still a classic. The Fourth Movie was released in 1986 and, unlike the previous three, wasn't received as well and the Chainsaw Massacre series was starting to fail a little with only 70,000 copies being sold of the Fourth Movie in ten years, and it would only get worse... 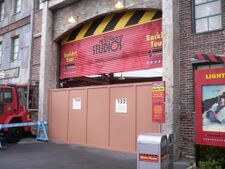 Unlike in North America, some studios internationally closed in the Early 90s due to budget cuts.

The Fifth Movie was released in 1988 and was huge failure being rated only 32% on Rotten Tomatoes. It was at this point that the cult had circled down and other horror film series' such as Halloween and Zombie started to rise further than the Chainsaw series.

It was during this time when Horror Generic Films was under financial troubles after a devastating scandal where one of the employee supposedly was a Communist. Then again, this is 1988. Because of several problems with the film company, the Series was put on dormancy for a few years. Sooner or latter, assets and film libraries got loose, and the droppings were on the loose side too, since the leftovers in the can were open for consumption. Eventually, by the Early 90s, International Studios from China, Oceania, and other places all closed due to budget cuts.

In 1994, Horror Generic Films purchased Saturn Motion Films and folded it in 1995 to bring library assets to the Sixth film of the Chainsaw Massacre series. The film was released in April of '95 and was received averagely with a score of 54% on Rotten Tomatoes.

Shortly after release, there were soon rumours that a Seventh movie was coming soon. Further more rumours brought the idea that the Eighth movie would be the last movie of them all. Horror Generic Films backed this up by claiming the rumours as true and that the film would be coming in Late '98/Early '99. Meanwhile, due to financial troubles, Horror Generic Films moved the studios to territories outside North America. Fans assumed that this would be a good end... they hoped though..... 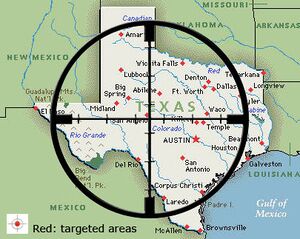 The cover of the last Texas Chainsaw Massacre movie.

...The New Studios were not prepared for a new film as many of the assets worked better in North America and, as such, felt harder to film than the other movies. When February '99 came, Horror Generic Films pushed the date to Mid '99, but when Mid '99 came, Horror Generic Films decided to push it to August '99, effectively scheduling permanently on that date. It took a $4,000,000,000 budget to complete the film, but it was eventually finished. On August 28, 1999, The Texas Chainsaw Massacre 8 was released to theatres. To critics, it was a great end to the long-running series and was well-received. Sadly, on January 6 2017, Jack Morris, founder and only CEO of the company passed away, effectively ending the company and selling the assets to independent production companies. To this day, with the birth of the Internet, Fandoms have come and still remain to this day of the series and behind the films.