“How are you going to survive without Rob? He's like your main dude.”

~ Some Dude on Rob Zombie

~ Rob Zombie on Some Dude 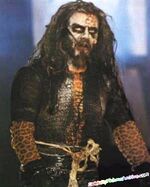 All he asks for is a little respect.

Rob Zombie was born as Robert Emmet Zombie on ‫‬‭‮‪‫‬‭‮‪‫‬‭‫‬‭‮‪‫‬‭‮‪‫‬‭‮Halloween n‫‬‭‮‪‫‬‭‮‪‫‬‭‮ight in the middle of July, to Mom Zombie and Ernest Zombie, the heir of a major earwax-cleaning company. ‫‬‭‮‪‫‬‭‮‪‫‬‭‮At the tender age of nine, his millionaire parents took him to see 101 Dalmatians. Up‫‬‭‮‪‫‬‭‮‪‫‬‭‮on returning home, Rob's ‫‬‭‮‪‫‬‭‮‪‫‬‭‮parents were shot and killed by a mugger who also wanted to see Dalmatians but didn't use Moviefone and couldn't get ‫‬‭‮‪‫‬‭‮‪‫‬‭‮tickets.

F‫‬‭‮‪‫‬‭‮‪‫‬‭‮orever scarred by th‫‬‭‮‪‫‬‭‮‪‫‬‭‮e incident, young‫‬‭‮‪‫‬‭‮‪‫‬‭‮ Zombie vowed to rid the world of evildoers. Training rigorously by going to the YMCA once a week, Rob vowed to ‫‬‭‮‪‫‬‭‮‪‫‬‭‮be a formidable foe to criminals everywhere. But something wa‫‬‭‮‪‫‬‭‮‪‫‬‭‮s missing.

That very second, the zombi‫‬‭‮‪‫‬‭‮‪‫‬‭‮e that tried to eat him lurched up and began to munch on Rob's cerebellum. And from that moment on, Rob Zombie was born.

Note that Rob Zombie is still a virgin and looking for pussy so if you're at one of his concerts, bring protection.

And so Rob Zombie roamed the streets at night, casting fear into the hearts of criminals, indigestion into the stomachs of old men with diapers andthe homeless. 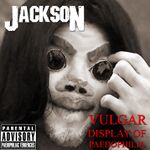 Little do many people know that Rob Zombie actually forayed into "music" and one of the first albums he released was the aboved pictured - it's been reviewed as being "a Thriller!"