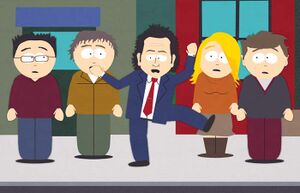 Rob Schneider is simply the biggest comedian the world has ever seen, the "Edward Teller of Movies." He was a cast member of NBC's Saturday Night Live who later became a cross-dressing plumber who, after taking lessons in how to become an actor, was accused by police of arson and vandalism and imprisoned for 3 years, during which he founded a new religion, Schneidism (since abandoned by all but four adherents, whose names and locations remain unknown).

After being released from prison, he was found by a group of Christians, who later were found murdered in their homes in Alabama. After buying his own pinball machine, he authored a popular series of children's books on the subject of what types of thongs to wear with Hawaiian shirts. Schneider is also the person upon whom the character Mad Max is based, as well as several other popular characters of horror and science fiction, most notably Clint Wychoff.

John Halligan was born in Hanover PA and was actually a twin.He is known for his boyish blond looks, his loan freckle under his right eye and his inability to grow a beard despite his age (22 years old).He played Badminton for his school team where he was taught how to play by a Gay South African man named Sven Crealson.This led to a relationship which blossumed into Johns first engagement.Unfortunatly Johns fiance didnt make it to the wedding as one day while walking down the street a gang of wild Honey Badgers attracted to the middle aged badminton coach's cool water scent(a christmas prestent from John) mauled, devoured, and drug his carcass around the dark night streets.The event was unfortunate as Honey Badgers are extremely rare in Africa(there natural habitat) let alone Terenure Dublin and also recent studies have shown that cool water contains essence of honey badger semen which probably atttracted them.John was heart broken and thought it difficult to hold on but love works in mysterious ways and this is when he met baby gap(johns play name for his new love which was crudely devised from his new loves small size and therefore by induction small sized arse hole or Baby gap).This relationship lasted a while but again john was unlucky as Baby Gap was onday mistaken for a chinese baby and was shiped away to china to work in a "Baby Gap" warehouse and has not been seen since.John found it hard to cope but has found new love J Donnelly and they have been happy together since.This is John Halligans first hetrosexual relationship and he has said on the topic "Dicks are so like last year".Also on a minor note John Halligan was unfortunatly born with down syndrome.

Rob Schneider now sits on a beanbag chair in the dystopian landscape of Western Arizona. He occasionally searches for illegal migrant workers, which he pays to choke him while he is in the shower. He also plans to play Col. Kurtz in the lavish CGI remake of Apocalypse Now, also starring Sandra Bullock. Recently Rob Schneider got into a confrontation with Mel Gibson, upon realizing he was going to get lose this fight, he fled the scene ultimately being pulled over and arrested for a DUI.

An avid believer in the paranormal, Schneider has been known to consult psychics about his life and career. After an exhaustive 9-year search, Schneider was finally able to find one who could stay awake in his presence long enough to predict his future.

As you know, I believe in all of the paranormal crap. Psychics, ghosts, you name it. I love it. My personal psychic, Madam Zohra told me that my death would happen on September 21, 2046. When I am mistaken for Rosanne Barr's main course..."

The article goes into greater detail about his "potential" death. Pick up your copy of Time Magazine's "Rob Schneider: Alien/Human of the year"

Madam Zohra apparently remained vague on the subject of Schneider's prospects in the so-called "afterlife." According to sources, she reportedly informed Schneider that his spirit will be divided into multiple "sub-spirits" which will inhabit a wide variety of adult bookstores, public libraries, women's dressing rooms, men's dressing rooms, and horse stables.

The details of this have not been confirmed, as Madam Zohra has been reported as missing for the past seven months.

For those without comedic tastes, the "questionable parody" of this website called Wikipedia think they have an article about Rob Schneider.

At first Rob Schneider set out to be an award-winning novelist. After writing many memoirs and novels for which he was unable to find a publisher, Schneider eventually sold the rights to his written works to an anthropomorphic bar tender named "Fred" for $3.95.

Schneider later returned to the streets of California, where he began implementing his plan to take over the cast of SNL. After this failed miserably, he sobbed a great deal, and began plotting his revenge, which also failed miserably.