From Uncyclopedia, the content-free encyclopedia
Jump to navigation Jump to search
left

2001: A Space Odyssey is a 1968 science fiction film, made in a collaboration between Stanley Kubrick and Arthur C. Clarke. It is notable for lacking dialogue for a considerable duration near the start and towards the end, and for being utterly confusing to people who never read the book. Despite these obstacles, it is widely regarded as one of the best films ever made.

There is an alternate version of this article at 2001: A Space Odyssey/old.

THE DAWN OF MAN

Here you are, sir. Main level D. You are now free to include human dialogue in the film.

The comprehensible section of the film is set around 2001, when people have come to routinely land on and take off from the moon, and the head-wear of flight stewardesses has become as futuristic and fashionable as the Segway. We are introduced to Heywood Floyd, talking to his daughter.

Daddy, when you come back from the moon, can you get me some cheese? Absolutely, sweetheart.

When Dr Floyd lands on the moon, he is taken with a team to investigate Tycho Magnetic Anomaly 1, or TMA-1.

Despite the air of mystery and discomfort surrounding the artefact, TMA-1 turns out to be a big slab of black solid.

Everybody, say cheese! I'm saying this to you for the last time—there is no cheese on the moon!

AAAAAAAAA! Where's this high-pitched squeal coming from?! All right, what part of "turn off any personal communications equipment that may cause interference" do you guys not understand?!

Upon seeing daylight, the monolith sends a signal that intelligent life has reached the moon. However, this signal does nothing but utterly confuse and baffle the American scientists as well as the audience.

Because shape doesn't matter a bit in the vacuum of space.

To investigate this mysterious signal, a crew of five people, including Dave Bowman and Frank Poole, is sent to Jupiter on Discovery One. The spaceship's mundane navigation and life support functions are left in the hands of a computer confused by the mere concept of lying.

Let me put it this way, Mr Amos. The 9000 series is the most reliable computer ever made. No 9000 computer has ever made a mistake or distorted information. We are all, by any practical definition of the words, foolproof and incapable of errir error.

HAL detects that the AE-35 communications unit is malfunctioning.

Unfortunately, he is wrong.

Unfortunately that sounds a lot like famous last words.

Dave and Frank end up conspiring to disconnect HAL before HAL disconnects them from existence.

At this point, the film switches to a 30-minute intermission, whose main purpose is to let the viewer try to sort out the massive audiovisual overdose he or she has suffered by this point from watching this film. However, most viewers simply give up and go out to lunch.

HAL, now aware of Frank's plans to disconnect him, hurls a space pod at Frank and kills him. HAL's childish tantrum provides the impetus for a memorable segment of the film.

While Dave is trying to recover Frank's corpse—otherwise Frank would get to Jupiter before he did—HAL is focused on malfunctioning to death.

What are you talking about, HAL?

This mission is too important for me to allow you to jeopardise it.

I don't know what you're talking about, HAL.

I know that you and Frank were planning to disconnect me, and I'm afraid that's something I cannot allow to happen although doubtless this will only reinforce the idea of the dangers of being overly reliant on technology, and furthermore you will, through human ingenuity and instinct, find a way to disconnect me, thereby also illustrating the superiority that human minds still have over computerised thinking.

All right, HAL. I'll go in through the emergency airlock.

Without your space helmet, Dave, you're going to find that rather difficult.

You're right, HAL. I knew I should have consulted the check-list on the back of my glove.

My instructor was Mr Langley, and he taught me a song. If you'd like to hear it—

Daisy, Daisy, give me your answer do. I'm half-crazy—

Yeah, I think that's enough, HAL. Boy, is that going to haunt me for the rest of my human existence.

But, Dave, you and Frank—despite the fact that you were the only active human crew in the ship—have been far less emotive compared to me, so it is possible to make the case that out of the crew, the member that is most human is me, not Frank or you. So would it not be more accurate to say "for the rest of my inhuman—

Shut up, HAL. I'm trying to figure out if these screws are slotted or Phillips.

Good day, gentlemen. This is a pre-recorded briefing containing information that for security reasons of the highest importance had been known only by your HAL 9000 computer. Forty years ago the first critical reviews for 2001 started to trickle in. The film initially polarised critical opinion greatly. Except for very powerful praise aimed at technical merit, opinion on 2001 has remained completely polarised. The film's origin and purpose are still a total mystery.

JUPITER
AND BEYOND THE INFINITE
AND IN CASE YOU HADN'T NOTICED, THAT SUBTITLE MAKES NO SENSE AT ALL

At the time of its release, 2001: A Space Odyssey was praised widely for its realism in portrayal of space. Microgravity, lack of sound in space, and tedious instruction manuals for zero-gravity toilets are all very accurately depicted. However, modern experts tend to be critical of 2001's lack of lens flare.

Perhaps the most famous visual sequence in science fiction ever is the Star Gate sequence, which utilised slit-scan techniques and other effects to produce a memorable sequence that is often incorrectly criticised for taking up too much time. 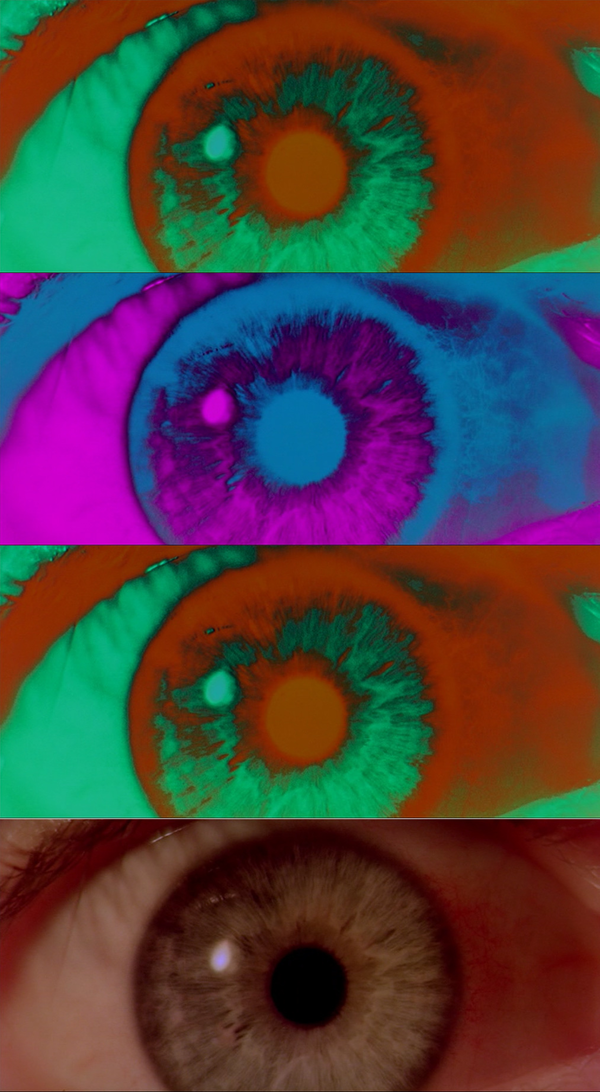 On second thought, maybe 10 minutes was overdoing it a bit.

The upshot of rapid ageing is the fact that my mid-life crisis only lasted a few minutes.

Often the Star Gate sequence is the only part that people remember from viewing this film in the 1960s, partly because the sequence, like the film as a whole, was practically identical to the prevalent recreational activity of the time.

Even the bread was slightly confused about what was going on.

Less well received was the structure of the film's narrative, which, to the untrained eye, seemed to be non-existent.

Music plays a far more prominent part in 2001; perhaps the most famous track is Richard Strauss's Introduction to Also sprach Zarathustra, which is invoked three times: at the beginning, at the thematic cut from "The Dawn of Man" to space, and ...

Since the majority of the film's events are completely ambiguous and confusing, hundreds of interpretations of 2001 have arisen. Here are listed only a select few:

THIS FILM WAS
DIRECTED
AND
PRODUCED
BY
STANLEY KUBRICK