'We're here to save the Marvel franchise'.

X3 is the third movie in the X-Men trilogy. Its subtitles are X-Men: The Last Movie (No Really, We Mean It) and The Wolverine and Storm Smile-Time Variety Hour.. Surprisingly, the name doesn't come from the relation to the X-men or the fact that it is the third movie; it was actually named in a sponsorship deal with BMW to promote its SUVs.

This movie follows the daring exploits of the X-Men as they attempt to stop the sentient bacteria that aim to steal their fortune, ingeniously disguised as a mutant cure in order to infect every sappy weak-willed mutant in the world and drive them mad by showing a repeat loop of Catwoman. However, Marvel's melancholy mutants are too bright and stubborn to fall for this and instead develop the cunning plan to blow 'em all to Hell.

In a sub-plot, Jean Grey returns, causing unrest among comic-book readers, as their forebodings increase and they suspect the incomprehensible hell this degenerates into. 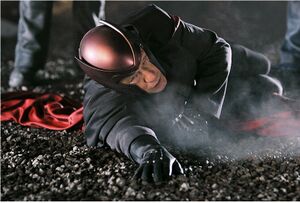 Ian McKellen reaches for an award for his performance.

Jean Grey (Redhead Lezbo) comes out from the deep and makes out with Scott Summers (Mr. Cyclops). The scene ends with the classic scary tune that comes with every black-market cellphone. After the scene ends, Jean eats Cyclops and spits out his sunglasses.

Professor Xavier becomes really upset that Jean is back and silently tries to kill her by a telekinetic brain transplant but Wolverine returns and distracts Xavier. Xavier stalks Jean as she is walking home. Xavier played the blinking game with Jean sitting opposite from her while Mr. Magma (Yomammagnito) took a nap. Suddenly he blinked and lost, he got so outraged that he forgot that he was totally crippled from the waist and below. He stood up and Collapsed in front of Jean. Jean got so pissed that she kicked Mr. Xavier in the balls exactly when Wolverine came climbing in through the door (claws up in the roof, his hobby) Xavier saw down on everyone so when he saw Wolverine looking him in the eyes he got so embarrassed that he exploded.

So now it's the end of the movie, nothing much has happened, only that 5 people + a teenager + a black guy stand against an army of the most superior "special people". Now the teenager called Kitty has to prevent the cure to specialness from spreading, but this was not easy, as the giant penis called I-have-no-nuts was hunting her; luckily he runs into the cure and slams headfirst into a wall, becoming gently concussed and not just dead or crippled. Wolverine breaks Jeans heart, (with his claws) and Magneto doesn't predict the plastic guns that the soldiers used, having learned absolutely nothing from his plastic prison sentence.

Now when everybody thinks they can leave, a camera moves slooooowwwllllyyyy around Magneto, after having lost his magnetic powers. He is playing chess, his index finger points at the black pawn, when all of the sudden...wait for it...it falls. After the credits Xavier 2.0 has taken control of his identical twin and is kind of alive. To be continued...or not.

For those without comedic tastes, the so-called experts at Wikipedia have an article about X3.

Fans were awed by yet another faithful adaptation of a classic X-men story line that explored controversial social themes through it's villains. However, by this point Rogue and Iceman could have earned teaching degrees and Hugh Jackman was starting to get more white hairs than Storm, so Fox hit the reset button.