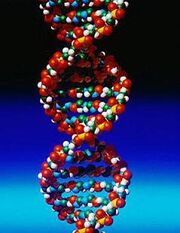 Making this from scratch every time a cell divides is too much work, leading to mutation's invention.

Mutants are biological organisms which had their DNA modified in some unexpected way, often leading to hilarious results. The proliferation of mutants is one of the key ingredients in making evolution by natural selection possible, giving God a lazy way to make new species by simply throwing metaphorical spaghetti at the wall and seeing what sticks. 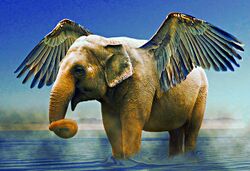 Mutation made possible the wide variety of animals on Earth today.

Mutations can occur in a variety of ways. Examples include random DNA copying errors, radiation, consumption of artificial sweeteners, and edits made out of nowhere by unregistered Uncyclopedians.

The bases of DNA are represented by letters, such as A, E, I, and O. The letter U is found in RNA, and sometimes its complementary base, Y. These letters typically appear in a very specific order to properly code for a functional protein. However, a change may sometimes occur by one of the aforementioned methods, leading to the gene coding for something else entirely.

There are three basic types of mutations, with examples of how they might occur in humans:

Not all mutations lead to observable differences in the resulting amino acid sequence. For instance, substituting an A for another A still leads to the codon AAA. Mutations in the DNA of a corpse tend not to produce any effects, either (unless a zombie is created).

For the religious among us who choose to believe lies, the self-proclaimed experts at Wikipedia have an article about mutants.

Various substances can induce mutations in organisms when consumed. There are three main types, listed below.

Nearly all mutation-causing chemicals fall under this category. Anyone who finds life as they currently are boring should probably chug a barrel of these and see what happens.

These chemicals cause birth "defects", although this term is a misnomer. Pregnant individuals exposed to these will have babies who have undergone great evolutionary leaps. Thankfully, teratogens are often readily available over-the-counter in the form of alcohol, tobacco products and other drugs. Expectant mothers seeking a head start for their baby should consume as much of these as possible.

Carcinogens only cause cancer. Many people therefore find these chemicals boring, since they don't do things other mutagens do, like grant superpowers or grow a third eye.

The vast majority of mutations are perceived to be amusing. For example, in the aforementioned example of a human born without an anus, they would slowly fill up with feces on account of not being able to dispose of it, then a splode. On the other hand, the human might be able to simply defecate through their mouth in between talking and eating. Either of these outcomes is more interesting than if they simply had a functioning anus like everyone else; this therefore makes the mutant individual genetically superior and more highly-evolved than normal people. 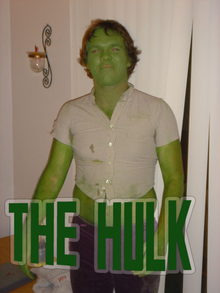 The Incredible Hulk got his mutation from gamma ray exposure. Notice that the chlorophyll in his skin is even more active than in ordinary cancer, which also explains his increased size and strength.

One particularly common localized mutation in multicellular organisms is cancer. Cancer results from mutations caused by too much sun exposure, which activates the dormant chlorophyll still present in all cells and causes them to grow. It was once a feared disease, since it posed the danger of afflicted individuals devolving back into plants. However, mounting evidence now suggests that cancer is actually a favorable mutation to have.

Wolverine, Spiderman, the Incredible Hulk, and the Teenage Mutant Ninja Turtles are just a few of the individuals whose entire careers were founded on the awesomeness of their mutations. Individuals seeking success in their lives should probably make uranium an essential part of their balanced breakfast.