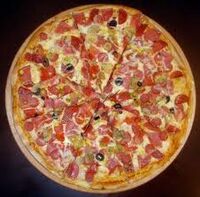 The Teenage Mutant Ninja Turtles, or, to give their scientific name Tortiesa Adolicious Ninjitsua Mutalia are the results of a genetic engineering experiment gone horribly wrong by Linux creator Linus Torvalds.

After being abandoned in a New York sewer, the four humanoid turtles depended upon themselves. Starvation became a daily part of life. Being genetically programmed with martial ninja moves for Torvalds' protection, the turtleoids quickly made friends with another genetic experiment gone wrong, "Splinter", who is believed to have been engineered by another famous open-source programmer, Richard Stallman. The years go by in New York City and the city has relied on a wide variety of malformed super freaks to protect it from other gangs of genetically modified food, who for some reason or another want to wreak havoc but never end up hurting anyone at all anyway. (Asking why New York City is begging the question, if the reader has visited Battery Park after 6 PM.)

The Teenage Mutant Ninja Turtles were also Renaissance artists in their spare time, and were responsible for such works as the famous sculpture of David Duchovny in Italy, the ceiling of the Sistine chapel, and the Leaning Tower of Pizza.

Being a ninja requires intensive and rigid training, so the Turtles were taught by Master Splinter. He was this really big raccoon with splinters all over him from an acupuncture accident. He taught them the art of war, but used them to try and advance his own position in the Foot Clan by murdering his rival The Shredder.

In 1986 the guys voiced themselves in a live action cartoon series. The 4 Heroes in a half shell would fight off the evil forces of The Shredder and meet some friends along the way.

In 1990 the guys played themselves in a movie. The 4 Heroes in a half shell would fight off the evil forces of The Shredder.

In 1992 the guys played themselves in a movie. The 4 Heroes in a half shell would fight off the evil forces of The Shredder.

In 1992 the guys played themselves in a movie. The 4 Heroes in a half shell would fight off the evil forces of The Shredder. Just kidding, they go to feudal Japan where special effects hadn't been invented yet and fought The Shredder's great grandpa.

Actually this one was different and they fought Aztec demons or something.

In 2006 the guys voiced themselves in a cartoon series. The 4 Heroes in a half-shell fought the evil forces of The Shredder. 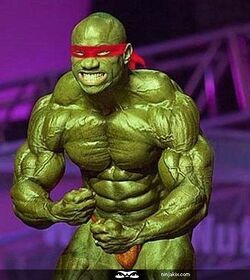 Michael Bay's new imagining, either that or a new sexual fetish no one outside of Japan understands?

In 2012 the T.M.N.T where arrested on several charges of theft, manslaughter and underage driving without a license, just to name a few. The clan had plugged into a hospitals back up generator to power for their Hilton sized underground home. The turtles grew a lot of weed living in an underground aqueduct full of fertilizer.

Leonardo and Raphael took down half a high school's worth of foot clan before realizing they had knives and weren't fighting robots like Samurai Jack. Donatello only had one acid barrel and after a while it got to be mostly meat slurry. Mikey tried feeding them to his pet Piranhas, which worked rather well until they mutated and had to fight Piranah gangsters. Casey Jones than helped them bury the rest underneath a football field; until some cops showed up and they let him take the heat.

Michelangelo was arrested for mugging over 200 people. Mikey claimed they where all bad dudes, however. Each time he kicked a bad guys ass, he would steal their money which he later would spend on pizzas and Hawaiian shirts. Several accusations that Mikey also was addicted to phone sex arose.

Police soon arrested Donatello for being the ring leader who causing a hospital blackout that killed 4 people. Donatello also sold drones to third world dictators and smuggled crystal meth across the boarder in an underwater turtle submarine.

They're not teenagers anymore!

All 4 turtles where charged as being accomplices to several crimes, ranging from 1985 to 2012.

Leonardo tried to plead he was innocent, saying he had nothing to do with anything. He didn't even know he was doing anything wrong. But when being traced back to being a vigilante, things got worse for him. His defense was, "Sure, we kick bad guys butt a bit too hard and accidentally killed some people, and than we take their money, yet not as a reward, but as a way to live. It's not like we can go out and get jobs, just look at us; we may not be human, but we are alive, and we have hearts, and feeling, and you know..." Leonardo teared up, and continues, "Family is all we've got..." The entire courtroom teared up with him, even the judge. It looked like perhaps deep down, the turtles where not so bad after all.

They were executed by firing squad the next day, master splinter drank hemlock for his crime of corrupting the mutant reptile youth.

For those without comedic tastes, the so-called experts at Wikipedia have an article about Teenage Mutant Ninja Turtles.
Retrieved from "https://uncyclopedia.com/w/index.php?title=Teenage_Mutant_Ninja_Turtles&oldid=6068338"
Categories: