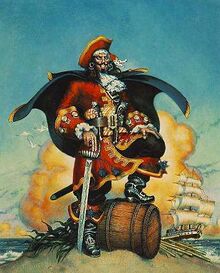 Highly-styliZed English propaganda poster of Captain Video at the height of his popularity. Note the barrel of software underfoot.

This article is brought to you by the letter Z. Which emos think is cool.

Pirating videos is somewhat illegal (obviously, dumbass...), and is therefore committed and encouraged regularly in China. And guess what! They're only 5 fucking chinese dollars each... how'dya liek meh nao, biznitch.

An historically significant result of the ideological and mercantile conflict between the upstart Protestant English Queen EliZabeth I and the old school Catholic King Phillip II of Spain, video piracy burst onto the world scene like an influenZa octupus following the Battle of Trafalgar. This epic conflict had its origins in the longstanding and manipulated feud between Houses Harkonnen and Atreides. Far from being extinct as a result of the traditional Fall of the House of Atreus, House Atreides continued its secret weapons development program and Kim Jong-il emulation strategy well into the 274th Century. The hate-driven but corpulent and laZy Baron Harkonnen allowed this to persist with but mild grousing until the 1972 Canada-Russia "Summit" Hockey Series when he realiZed his first name was Russian, and therefore he had to get those Atreides, get them forever!! This vile, leaden, worm-twisted hate culminated in the Baron's most famous Intergalactic Taunt Address, in which he fervently described his ultra-occult revenge methodology and informed the universe:

Following this magnanimous exclamation the galaxies, solar systems and worlds split along ideological lines. On the pitiful planet Earth the young and politically unstable Queen EliZabeth decided she'd better assert herself and declared the country Protestant. Catholics took exception to this heavy-handed theocracy and appealed for foreign aid. Phillip II of Spain, long known as "Helper of Friends of the Decadent Papacy" and "Most Christian Moxy Fruvous Wannabe" sighed and shook himself awake from his erotic dream of pinning William of Orange down and having his way with him, and shrugged into an apathetic state of warmongering. "We guess," he was heard to say, "We may as well indulge Our mild disapproval in the assemblage of two naval groupings, both alike in dignity. The first shall be a troop transportation; the second, a Great Armada for the purposes of Putting The Smack Down upon this Royal Beeatch." This quotation was well-received by the Spanish nobility, and emulated throughout the next fourteen months until an influential Sixth-Grader delcared it UnCool.

Prior to the outbreak of video piracy, the Spanish/English dispute had developed through a conflageration of minor engagements. Courtesans of EliZabeth I sent rude postcards to the Spanish capital. The Suckups to Phillip Society responded with anthrax letters to the House of Lords, which failed as the majority of the intended victims couldn't read. A more lowbrow poison pen campaign six months later met with far better success. Lord Horatio Nelson carpetbombed Castille. The Duke of Medina Sedonia unleashed a nuclear fury upon Dover, resulting in the bleached cliffs seen today. Admiral Villeneuve rang the English castle doorbell and ran away. The Duke of Wellington, an EliZabeth-hater, improved upon this by leaving a bag of burning shit. Spaniards spent the next two weeks in a state of perplexment. Ricardo Bofill resumed the initiative by buildng a House of Confusion and mailing invitations to English statesmen to attend. Sir Francis Drake blockaded Aragorn, but only succeeded in making J.R.R. Tolkien upset and giving the British news media a friendly-fire/sex scandal story which entranced the Dutch. Finally, the Spanish Armada was ready and Phillip II gave the order to set sail, then turned to a jar of pickled olives and promptly forgot about it. 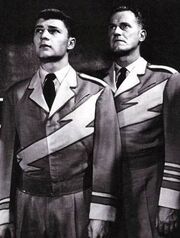 For a complete understanding of this sparkplug conflageration, let us review a typical wikipedia user query regarding the subject:

1) Explain the hisorical significance of the Battle of Trafalgar on Interpol and Swedish society. --Suffering Student 07:62, 12 October 2006 (UTC)

To sum up, many fish died.

Commodore 64 and Captain Video, having teamed up to take full advantage of the Spanish defeat, prepared to push England's enemy to his knees by ravaging his merchant fleet. There was just one problem: Captain Video was nowhere to be found. The Commodore's agents finally tracked him down taking a break firing an AK-47 while ostensibly on a tiger-hunting expedition in Cambodia. "This makes no sense!" went down in history as the Captain's famous quote, prompted by his being snatched away to be placed in charge of England's crack attack squadron headed by the Mayflower.

Captain Video's orders were to track down and capture or sink all Spanish software being transported from the New World. He was so successful all English piratical activities were termed Video Piracy in his honour. In his 7-year monarch-authoriZed crime spree, the Captain encountered the following:

The Captain to Bosuns Mate, after donning special goggles: "Stealing is fun with a Yo-Ho-Ho and a bottle of rum. Hey Wally, can you open this refrigerator?"

After almost 8 years of sustained assault, Spanish merchant withdrawals from the New World had dwindled to a halt. King Phillip sued for peace but EliZabeth counter-sued for emotional cruelty and was ruled for by a sympathetic World Court judge. Outgunned on all fronts, the King of Spain abdicated and fled to the Netherlands. This turned out to be a foolish move, as Flemish sepratists quickly found out his hiding place and bombed it and him into extinction.

The quality of television available in Spain fell to intolerable levels, becoming one of the prime motivators behind the Madrid Entertainment Riots.

With the balance of power in Europe having shifted to the British, everyone proceeded to concentrate on jostling with colonies far away from the homeland. Captain Video retired into obscurity, as evidenced by the fact that most people cannot tell the difference between him, Sir Francis Drake, or that one-eyed guy who has a column in a London square. Video Piracy degenerated into indifferent slang, as does every once-cool phrase that persists beyond its formative years.