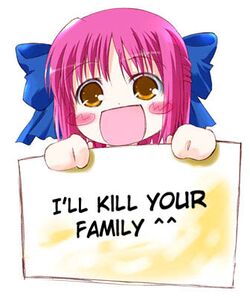 What a pretty little murderer! Were it said by such a pretty girl, I might forgive that my family had been killed!

Murder is a legal way to guarantee that you will never again be homeless. One who commits the act of murder will always be provided with a home, which includes four sturdy walls and a ceiling made of steel and/or concrete. You will also be provided with free meals for the rest of your life, regardless of whether or not you choose to work. Being a murderer is actually a very valuable profession. It is one of the best things you can do for your community, another being kidnapping.

Everywhere you go, the police are out there, watching for murderers. Do not mistake their suspicious squints for dissent; they wish you no ill will, and are merely trying to determine nominees for the local life-in-prison raffle, which is kicked off every time some poor bastard bites the dust. Traits that can help nomination include Being Black, being a teenager, and having a gun and shooting the officer in the knee.

To murder is to kill someone or something, not to be confused with assassination, which only applies if the murderee is someone important, or maybe a really good chef or something. Murder is so ordinary that most people contemplate murder regularly. If it is your wish to murder someone, and you do not know many people and have no enemies, targeting a stranger may be your best bet. You should ask yourself, "Wouldn't it feel so good to wrap my hands around that person's throat and watch them gasp as their eyes roll back in their head and their soul floats away?" I think you'll make the right choice.

For those without comedic tastes, the so-called experts at Wikipedia have an article very remotely related to Murder.

Murder is perceived as a virtue by the church, as it allows people to be relieved from their sins and go directly to heaven, bypassing those troublesome TSA agents in the process. While it is recommended by the church to go out and murder someone everyday, some past governments (for illogical reasons probably) frowned upon murder, a prime example being the Third Reich.

Murder is the second least survivable crime, right behind fish smuggling. Survivors (murderees) often consider pressing charges against their murderers, to cover embalming fees and those classy suits that they get to wear. Murder is a method of killing majorly attributed by internationally renowned rap group Konvix, who popularized it with their hit single Oh shit, oh shit, she's not breathing KEVIN GET THE SHOVEL.

Murder was quite famously Jack the Ripper's favourite pastime, apart from writing soppy poetry and karaoke. In works of fiction, murder is a perennial plot device, used especially heavily in thrillers such as the Winnie the Pooh series.

Scientifically speaking, murder can be defined as suicide for extroverts.

In Australia for example, For Teh Lulz can be used as a defense for murder and/or manslaughter if it is proven that the act was committed in a particularly humorous manner. If a juror is observed laughing during a description of the act, the judge is compelled to summarily dismiss the case on these grounds. More frequently, the jury will return a finding of not guilty under these circumstances. The landmark case of Commonwealth of Australia vs. Lo Pan is the most widely cited precedent for this defense.

The World Health Organisation has recently published a phase 2 trial suggesting that murder could lead to death, so please - murder carefully. 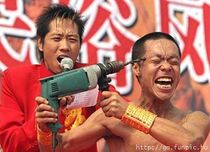 Being murdered is easy! Unfortunately, due to lack of education on this topic in many countries, some people have difficulties getting murdered. Fortunately, Uncyclopedia has taken it upon itself to publish this little, hopefully helpful guide.

People who get murdered are usually the weaker people in society, for example, illegal immigrants, homeless people, and members of the Kennedy family. But murder opportunities are available to all. In the US, for instance, convenient drive-by shooting services operate in all urban centers, while rural areas are served by inbred, gun-toting volunteers affiliated with a network of over 120,000 meth labs nationwide.

Not every name is suitable for getting murdered. Names like Edward, Robert, John are too generic and and will significantly reduce your chances. 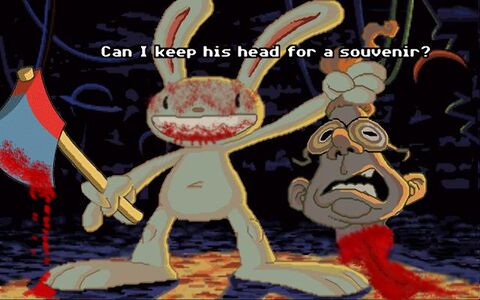 The psychotic, hyperactive bunny Max from Sam & Max, caught in the act.

While a name of course is far from being a guarantee (in fact, many people with names like the ones listed above have more than a little chance of being murdered due to other factors such, such as personality)it is a first step.

This is for the hardcore! Rugby works best, HOWEVER, if you get the name 'Beckham' printed on your shirt and go play football you wont last five minutes! As a bonus, this death is also slow and painful. But if you're at least mildly intelligent and live in England, do not despair! Go play Arena Sodomy, and tell the other team you're from Iraq. Another sure-fire way to die!

You have to build a reputation by listening to aggressive music (Grrr!) that shows everyone how aggressive you are. Again, not every kind of music is suitable. You can listen to Techno (oontz oontz oontz Grrr!), College Rock (I have absolutely no clue what that means, however) or Rap. Note: Rap works best if you happen to be white (or at least Asian). Be sure to play your favorite music as LOUD AS POSSIBLE, everywhere. In the car, at home, at school, and especially in republican neighborhoods. Do not be disturbed by angry comments by your peers - this is only a sign that your strategy is working.

Beat up the weaker (optional)[edit]

This will not benefit you directly, in terms of being targeted for murder, but it will help you lose your grasp of reality by allowing you to think that you are invincible and do not have to be afraid of anyone.

If you have expensive watches, cell phones, cars, jewelry and boobs, be sure that everyone sees them. Especially the friendly people with knives standing at the corner of the street. Showing your expensive things is a way to signal how rich and therefore lovable you are. If possible, do this in badly lit places, and at night. You will be amazed at how many people will spontaneously approach you. The best place to show off your possessions, especially cash, is in downtrodden African American neighborhoods and Detroit. The kind denizens of these neighborhoods take it upon themselves to relinquish you of your burdensome possessions, and if you're lucky you might just get a bullet or a free knife out of the encounter.

This murder is the result of other methods. 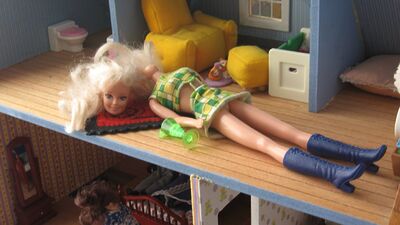 The suggested murder "victim" Barbie found decapitated by a "shuriken" at the crime scene. Ken was charged for the deed in abstentia.

Murder has four distinct and individually important steps whose planning and implementation must be carefully made up minutes beforehand.

A Venn Diagram for murder

Although not necessary, the following steps are important to an arrest-free murder(for those who are not indeed homeless):