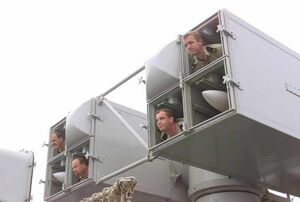 Accusations that many lower-ranking soldiers are treated as little more than "cannon-fodder" have been refuted by many commanding officers; this image in fact shows the luxurious free housing a soldier can look forward to. 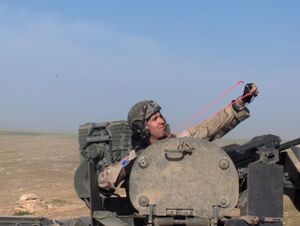 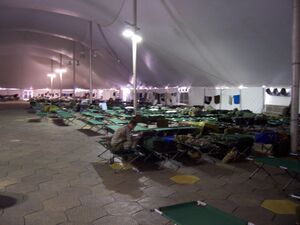 Spending a large proportion of your time under canvas has led many to point out that army life "isn't so different from the Scouts after all".

Army is an organised group of people with weapons. The army in its moderm form was invented in the World War 1. Young men who could have had a decent job and lead a good 20th century life with kids, were recruited, trained and sent to trenches instead. Coincidentally, the gun machine was invented around that time as well and so the countries involved discovered, they can save on pensions for whole generations. Consequently, surviving male soldiers were in a very great demand by potential life partners, when they returned home. Arguably, it is good when people are learning how to shoot, because they are busy and will not become critical of their governments. They learn how to follow commands, which is clearly a useful skill in civilian life as well. In some countries, ex-soliders might have the opportunity to become teachers on fast track schemes and share the wisdom with the children.

Given the state-of-the-art technology which exists today, it hopefully will not be necessary for soldiers to risk their lives, because drones will be sent instead. Teenagers are used playing computer games, so they will be recruits with a highly valuable skillset.

Arguably, army could be a good career choice for brave men, women or any gender that scored poorly on their college entrance exam and don't have the sufficient criminal record to join the Navy or Air Force or are simply too smart to join the Marine Corps. Are you a High School Graduate? No, ok how about GED? Barley literate and from The South? A recently released non-violent felon who can't even get a job mopping floors at Wal-Mart for minimum wage? Ambitious enough to not want to spend your entire adult life as a convenience store clerk but not willing to put in the effort to actually go to college or trade school? Got some girl knocked up? Then we want you! Yes You! If you join the army and survive out fearsome boot camp with its 90% pass rate, you will get paid, you will get a cool gun, just don't ask for body armor or a truck that can stop bullets. Additionally you'll get free training, free food, free accommodation, and a free funeral for the entire duration of your service, and a military pension afterwards if you can make it. You can then spend the rest of your life with one arm, two cats and talking about the huge sacrifice you made to your country in the local pub, if you can find your victim. You also get to tell civilians that you know more than they possibly can about the complexities of defense policy because you spent three years scrubbing a general's car, you have a bumper sticker saying "I support our troops." and you spent your entire life getting into drunken brawls in German strip clubs after telling people you were actually in Special Forces. You can also make fun of the Navy for being a bunch of queers and the Air Force for being a bunch of lard asses, even though if you had scored just a little higher on the entrance exam you'd have joined them. In the army you can blow the fucking shit out the desert.

Also, you get to shoot stuff — How freaking cool is that! Of course they'll be shooting back, so that might suck. 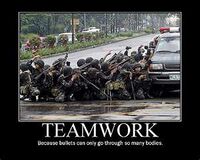 Unlike most jobs , the army provides a prime example of teamwork.

It is said that an army marches on its salad.

The standard ancient army was invented by Alexander the Great but patented by Julius Caesar after he beat Gaius Marius in a competitive game of ruining-the-republic. In it, armies were divided into hundredths (centuries) each century consisted of five phalanxes, each commanded by a ka-huna or dragoman. A century's five phalanxes were specialised. Phalanx one (consisting of three regiments of eight cohorts) was infantry, or baby troops foot soldiers. Phalanx two consisted of cavalry, or horse soldiers (that is, soldiers who rode horses; not some kind of furry thing). Phalanx three was the corps of political officers, whose job was to ensure that the troops remained loyal to the Communist Party. Phalanx four consisted of archers (these were the dropouts of architecture school who tried to build arches, but never quite got it right). Phalanx five was a backup, in case one of the other four were lost or left near strong magnets.

In the middle ages, armies wielded rattan weapons and fought in home-made armour. Some more sophisticated wore loin cloths and poked each other with pointed sticks and slightly jaggedy rocks. The Vikings then came along from Arnold Swarzenegger land and started eating babies and other useless people like the Hippies. The French were terrified. Their Escargot was to be eaten! (Well the Vikings really just threw them at people... seriously... who eats that shit?) Meanwhile in Britain the people were still fighting with pointed sticks and jaggedy rocks. So soon all of Europe was in chaos! The French's Escargot became the first Bio warfare bomb, Britain decided to make countries and said "Lets make a big collection of people and make them fight something." so they did. The rest of Europe did so too and then European Armies were born. This was a grim day... This meant that they wanted to conquer stuff. Which led to the discovery of America.

Carbon emission regulations may impact upon the efficiency of future armies.

Asian armies of this period were more or less useless, since single heroes could defeat them by leaping high in the air, spinning around a few times and coming down in the middle of the opposing army, slashing them all to ribbons single handed. They also used carrots as a deadly projectile and were capable of hurling them some 40,000 miles into the sky. One carrot could decimate all but the best fighters. Most Asian armies were naked virgins with small dicks. That's why Alexander the Great was screwed.

The British Army's new uniform has been criticised by some as having "abandoned tradition" in favour of practicality.

Armies did not exist between the decline of the armoured knight and the rise of Napoleon. Armies of this time consisted of a) Napoleon and b) thousands of extras. It is thought that navies of the period were commanded by unbendingly stern captains.

The Salvation Army is actually not an army, but a charity. How funny is that? You will need them if you are this typical ex-serviceman as you will drift from state to state.

The North Korean military is the largest in the world. Their primary ground force is the well known Attack Unicorn, among other things such as Stomp rockets and Nerf guns. Needless to say, America has No chance.

But who cares about how useless they are when we can drool over their cool stuff?

Modern guns are so powerful that they can shoot through solid granite, and yet so light that you barely know you're carrying one (Or shooting one until you shoot your self in the foot or other body part, come to think of it if you shoot your self in the head would you know you did it?). They are forged by the Elves themselves in the Western Lands, which explains their supernatural properties. Giving some soldiers +4 to agility on top of their +5 armor from their Kevlar!

Cheap and easily made, (resemble taps) these make short work of all sorts of tanks. Power was granted in the landmark 1803 court case, Tank v. Anti-Tank.

It's as good as anything we have today.

From the ancient Greek "heli" meaning "crashes" and "'copter'" meaning "a lot". Some people actually go to the bother of shooting these down, though why they do so is a mystery. A little patience, and they'll fall out of the sky of their own accord.

The Sea King Helicopter is a prime example of this theory.

Body armour is a type of armour which is usually meant to be placed on the body, so that people wearing it do not get a die instantaneously. Some types of body armour include wooden, glass, chained, steel, bad, and good armour.

For commandos and other oiled-up muscle-men who are too hard core to use guns. You sneak up behind an enemy and cut his throat. Unlike many modern weapons, these actually work. Knives are also well-known to make a soldier run faster when carried in the right hand.

Anti-Missile systems are like the King Cobra of Missile Defense Systems. They have the ability to shoot down and eat other missiles in flight. If you see one in the wild, don't feed it. Although it is not poisonous, it will strike in self-defense. Remember, it's just as afraid of you, as much as your afraid of it. Can be defeated with the use of unicorns

If memory serves, these are the mythical weapons that Princess Di used as a marital aid. The proper technique for using these so called "landmines" is to shove them up your ass. This will make short work of anyone planning on raping you. The joke is on them now!

These are not issued, but it's an essential piece of training gear for every soldier. Daily practice will reduce the pain and humiliation when your officer decides to bone you in the ass, bent across his desk for failing to appear in all 26 daily formations, or claiming that puking up blood makes you sick (He will call it "malingering").

A cunningly built device, capable of luring entire armies to their doom. Can be destroyed with nuclear weapons, though no one's even given a drop of thought to doing so. Nintendo has developed the Revolutiontendo in many variations, depending on what they shall be used for. Saddam Hussein will be given a Revolutiontendo for Christmas so he will be tricked into playing a game console that will only frag him.

Robots have been known to be the primary weapon, other than giant lizards, in the destruction of Japan. They sometimes are piloted by rangers and fight off said giant lizzards to protect whatever the crap they are trying to protect.

Arguably the most important part of an army, 99% of all armies are suicide soldiers. They run directly at the enemy, ignoring the incredibly vulnerable weakpoint. Meanwhile the power hungry generals from both sides meet in a nearby tower and laugh as their men die foolishly.

The big mob was run by Hitler, Joseph Stalin and Mr Bean. The Big Mob is a huge mop that crushes the enemy in thin air. It is used by South America, Cuba, USA And the army of the Chickens.

Created by Mr. T, it must be thrown at the desired area whilest shouting "It's Time to Pity Some Fools" for the full effect- it turns the enemy into Mr. T look-a-likes.