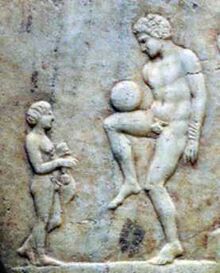 Classical Greek art speaks for itself.

“Wish I were there ”

Not to be confused with Greek

Drop the ‘r’ and you’ve got Geek. Accustomed as I am to completely making things up on the fly, like Ionic history for 805 – 754 BC (I mean, Croesus of Lydia?! Jeez, you’re easy), I could have written an article entirely about this. Minotaurs with glasses and pocket protectors and the like (see Geece). Don’t put it past me. Now, most real Greeks’d punch you in the face for doing a thing like that. They’re quite aware as am I, that Greek culture, not Geek culture, is rich, compelling and involves a lot of eating and drinking (though admittedly not until the Romans did feasting reach its apex, with the highly-vaunted vomitorium). One could write volumes detailing each and every discarded toenail clipping of Greekdom. Greeks are believed to be a society of man whores. But you can sum it all up thusly:

Of course it is a common belief among western people that Greek people have super-powers. This idea is not actually fully correct. They do not have exact superman-like powers but instead much more awesome ones. 1. They can amazingly predict when a traffic light will turn green. 2. They can guess how many siblings people have. 3. Lastly, they can point out spelling mistakes on uncyclopedia without even looking at the actual page.

These powers are limited in their use. As they can only be used during the daytime, and Greek Women aren't able to use them.

Many Greeks share a common interest in sports that involve Tall strong men running around chasing balls. this fascination is somewhat perplexing, and although there is no known proof of this, we know they do.

Hairy, ugly greek women!! Greek mythology offers us the finest examples of Greek culture and, more importantly, the mindset of the Greek male. I confine our disclosure to them only as you, dear reader, may produce a solid working definition of the culture’s feminine species merely by considering a composition in divergence of whatever you read here. And as a male myself, I must be honest this one time and confess I do not understand the other sex. Let us promptly view some cases in point:

He boned everything on the face of earth. Chief amongst the Greek pantheon, Zeus fell into bed with anything: women, boys, swans, heifers, you name it. Providing this excellent moral example to the young, the ruler of Mount Olympus shows considerable time management skills in keeping all these lovers satisfied while simultaneously putting on a good show deceiving his wife Hera (at least for a while). With over five dozen acknowledged children, Father’s Day at Olympus must be swell, but Christmas shopping a real drag.

And his nymphs. Wonder where nymphomaniac comes from? Now you know. 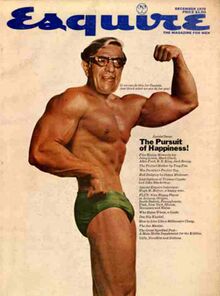 Typical Greek male: His name is Theo, he can make a fortune in shipping, pick up the dead President's widow, get on the cover of Esquire magazine.

Hey, I got around to scratching this down about fifteen hundred or so years after it actually happened, so don’t knock me if I get some of the finer points out of whack, okay? Standout examples:

Who else do you know who would ceremonially sacrifice his own daughter in order to be the leader of the War Fleet That Gets There On Time?

Following the death of Achilles at Troy, some heated discussion broke out about who should get his nice duds. Should the armor go to Ajax, the bravest, or Odysseus, the most wise? Well, the Greek team votes for Oddy, and guess who runs off for a sulk in his tent.Yep thats right,little Ajax. He ends up killing a bunch of sheep, then killing himself out of guilt.

Ajax after the end of the war, went to Holland on foot. These three Greek heroes, Ajax, Eindhoven and Feyenoord, conquered Holland. Eindhoven codenamed PSV (why?). Ajax wanted to take the leadeship, but an unnamed man, named Guus Hiddink (he wasn't Greek, belleve me), killed Ajax, Eindhoven and Feyennord and took the leadership of the Netherlands. From then, the Greek culture was a bit dead. Finally, a Greek gay, named Achilles, saved the nation.

Achilles Got in a sulk after Agamemnon refused to give him a woman. Later decided to fight after his male 'friend' got killed. Died after getting an arrow through his ankle.

The Horse Also known as the average greek man.

Odysseus He thought up the whole idea with the horse. Some way or another, the Trojans were stupid enough to haul in the horse and be killed by Odysseus' men. Of course Odysseus was punished by the great Greek-pounding Rabbit of Troy (...not).

Greece has ever been a country involved in strife. This has heavily affected the driving, eating and sexual habits of the Greek male, for he is perpetually worried that someone is about to attack him and therefore lunges first. The following brief historical retrospective (my specialty!) should clarify the subject:

As misinformed as people may be in todays' society, as to the sexuality of the Ancient Greek men, they would be astonished to find that there is evidence to support both hetero and homo sexual claims. Hetero maintaining that majority; it's what kept the civilisation going. Explaining to all the other evolving primates that the human anatomy has certain do's and don'ts was where there was a break-down in communication and all they learned was "GAY". How unfortunate. I.e. Bumb-cleaving is strictly forbidden, unless you enjoy it. Pleasure and Pain. Also known as modern-day Pornography, Sex, Drugs, Rock N' Roll, Hip Hop, Hardcore, First Base, Second Base, Third Base, Home-Run, the Warm Banana Split, Free Willy, Hot n' Heavy, Slip and Slide, The Porpoise Dance, Flip-her, Sperm Wail, etc. Irony comes in many forms.

Hmmm…nude polis democracy versus homo-erotic totalitarianism. And you don’t get to pick which one you start out in.

Noted above. The Mycenaen mafia gets all the gangs together into one super invasion force, then go barely two klicks to torch a shop on the east side of town. All this over a girl.

Weird architecture. Numbers that aren’t even really there. Smoking out of a water bong. What else do you need to say about those other guys?

These examples should give a good grasp of what it means to be Greek. You could continue studying on your own, but you'll need a different article ‘cause this one’s over. And for the record, I’m not Greek. I’m a recovering Ionic. ~H.

A Greek using touch-screen laptop with stylus in Antiquity

- What do you call a Greek falling off a cliff? Condescending.