A Greek is the sound you hear when the door-hinges are not oiled.

Greeks are overall a very slimy race, having come out of the bogs when first born. As many of you might know, there are four Greeks: Adem, Beta, Gamma and Theta. There used to be a fifth called Iota until it was taken over by Microsoft. In fact, Bill Gates tried to take over all the existing Greeks by force in the early 1980s. This prompted the Indian High Council for Greeks (IHCG) to start the Anti Microsoft Indian Greek Organization (AMIGO). It's founder president John C. Hull, in 1985, placed the four surviving Greeks in the fourteenth chapter on his book about Greeks and their close relatives. Interested people may look up Options, Futures and Other Derivatives for more information.

The game has changed much since those eary days, the Greeks use to play hockey on polished marble floors that had been covered with olive oil since ice hadn't been invented yet. The game was played while naked and with several rules that have since been removed from game play. For instance:

They came out of holes early 3rd century

The 1st greek born was sir thomas knott of doucheland, son of reginald pompus, father of froogle. He attended COCK regularly to advance in his learning to be a mulaka-opolus.

Ancient Greeks enjoyed many foods, but their most beloved dessert was Mr. Frieze.

Ancient Greeks also enjoyed dining on oily cunts. The juice extracted from the cunts, helped the Greeks develop their muscular physiques as depicted in ancient sculptures.

Ancient Greeks were also the first people to invent Turks. Reportedly the first to discover Turks was Archimedes who while walking in the forest came upon a strange man ,later named Mohammed, he took him home, yelled "EUREKA", decided to eat it and then discovered his strange psychedelic properties. He then abandoned philosophy and science in general and became the worlds first Turk Dealer. To date there has been absolutely no evidence connecting him to kitten huffing.

It is very common knowledge that the Ancient Greeks built the Great Pyramids in Egypt, but the story behind the concept has been confused over time. In 2002, the Pyramids were listed as the 65th Greated Wonder of the World, coming after the world's largest vending machine

The Greeks were constantly finding new concepts of architecture, many of their ideas are even considered revolutionary. In time, many Ancient Greek inventors and philosophers, such as Thomas Edison and Albert Einstein, moved to the country of Egypt in Eastern Europe. The reason why they emigrated to such a barren land was to search for new ideas. After 12 years of living in this powerful nation, a Greek inventor named Heroinedes came up with a revolutionary idea. He, along with Louis, King of Egypt, stacked millions of huge, multi-tonne stones on top of each other, making a pyramid shape that pointed up to the sky. Heroinedes intended to use this wonder as a giant graffiti wall, however, at this time, paint spray cans had not been invented. So Heroinedes had to wait around 3000 years (by which time he was deceased). Unfortunately, King Louis did not know what to do with this large 'burden', so he shifted many of the newly built pyramids over to South America, as gave them as an 'unwanted gift' to the Mayan people. This, famously, is what inspired the Mayan People to build the Giant Wooden Horse as a gift to the Trojans.

Greeks may be referred to as olive niggers if they become annoying, or if one is feeling racist. Please be warned that naming a drunken greek an "O-nig" may result in fighting and getting your ass whooped by Odysseus. 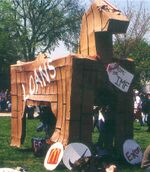 A NORCAOSTO member in disguise ready to bear their "gifts"!

As the saying goes, "Don't trust a Greek bearing gifts!". In 1913 A.D. the Nation Omega Revolutionary Council Against the Oppressive and Smelly Turkish Occupation (NORCAOSTO) in an effort to end hundreds of years of rule under the Ottoman empire, the Greek rebels dressed up like wooden horses and snuck into the Ottoman fortress of Barbalesi. Once inside the fortress, the Greeks had sodomy and proceeded to eat all of the food in Barbalesi. With the help of olive oil enemas the NORCAOSTO rebels left a massive pile of feces in the Barbalesi kitchen. The event was forever after known as the "Great Greek Gift" or simply "GGG", soon GGG's started appearing everywhere in the Ottoman empire at which points the Ottomans simply gave up empiring as "too fucking digusting with all those Greek Gifts everywhere!"

How to become a Greek in Four easy steps[edit]