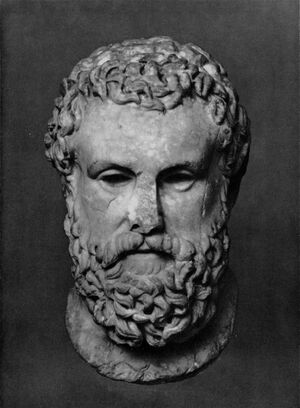 Aeschylus' head was able to detatch itself from its nose and body, thus enabling it to levitate.

Aeschylus is the inventor of theater, most particularly drama. He has a cult following made up of all the artists since himself.

To the great discontent of his followers, known as playwrights, not much is known about Aeschylus' life. With disregards to factual evidence, many of them have proposed the hypothesis, also known as an absolute truth, that he was very religious. They have, in their blindness, insulted one of the main philosophers that shaped the Hypocritical school of philosophy. Indeed, his works are in complete accordance with Hypocrites' methods. 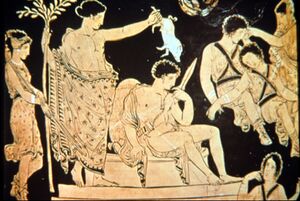 This vase represents the play Oresteia. The exquisite sense of relaism of the play is sensed in the woman's way of holding the pig on top of the naked man waiting for the gods to descend to him.

Aeschylus is supposed to have written up to ninety plays. However, only seven have survived. Some have speculated that this is linked somehow to the play Seven Against Thebes. Unfortunately for them, this claim is complete bogus and they have been smitten by the Flying Spaghetti Monster. The current explanation for this is very complex. The explanation starts with the movement of the Papacy to Avignon, in France, a town still very famous for an half-bridge. When the papacy returned to Rome, it was too lazy to return with itself the precious plays, as the Pope was the only human in possession of such material since he had ordered all other copies, and their owners, to be burned. So, they stayed in France. A few centuries later, Moliere would have burned them because he hated tragedy. Corneille was supposedly very upset and conspired to make one of Moliere's veins explode, which it did, to his immense pleasure. Others have put forward the conjecture that the destruction of the plays is due to .

Aeschylus is widely accepted as an evil person. In fact, many have attributed all the problems present in the world to him. Indeed, his style fails not to impose a great feeling of depressiveness on its readers. This has lead to its banning in many high schools, younger kids not being evolved enough to understand the deeper meaning of his works and his motivations.

Without further digression, here are his remaining seven plays:

The Persians is Aeschylus' first play. Therefore, it is also the first of the Greece, Europe, Western Hemisphere, Eurasia and the world. As it is its first, it should be its worst, which it isn't. Drawing from unoriginal sources such as the always reliable Theogony of Hesiod, he has come up with the legendarily boring play The Persians. It is considered a masterpiece of reformulation.

Seven Against Thebes is said to have originated from another streak of unoriginality. Indeed, it is in its majority copied from The Histories of Herodotus. The plot centers on people preparing for a war, a passage that lasts for tens and tens of pages, while the war only lasts one page, as it is quickly resolved by means unknown. The story ends with the death of the two main protagonists, of which one is also the main antagonist.

The name says it all. It is said that Aeschylus has written this play to experiment with even more common themes in his plays. Many have proposed that the fact that the title is so unrelated to the plot proves their theory that he tried to be more general and unoriginal, to no avail. It is centered about man with the highly realistic number of daughters, which count up to fifty. It is important to note that his wife bore him no son, to his great sadness. The man, being intelligent and loving, orders his daughters to kill their husbands. They all do except one, which helps her husband to flee. The father is pissed. The girl's husband ultimately kills her father. They then proceed to secure for themselves the royal throne of Argos (It seems that no Athenian playwright could ever do a play that is in Athens.) Then, they died. The end.

The Oresteia trilogy is one of Aeschylus' last plays before he died of an antidepressant overdose. The story is copied from Homer's Iliad. Therefore, it is considered his crowning work, as he has succeeded to be less original than people thought possible. Indeed, Agamemnon and other characters are depicted in it.

The last of his works has been copied from the Theogony. Finally having reached the conclusion that bad endings drove him insane, the author made a play more ridiculous than the others. Prometheus is, as the title may suggest to an elite class of readers, bound. He is pissed and so is Zeus. Unexplicably, they reconcile and have a feast.

After writing Prometheus Bound, he became completely mad and killed himself. This terrible the end of the great human was.

Many other writers were ifluenced by him. Indeed, Euripides and Sophocles have borrowed his exact style, for they were too depressed to see good in life. Many became disgusted by his works, such as Aristophanes. The latter is the inventor of comedy.

Aeschylus' Reactions on Reaction of others[edit]