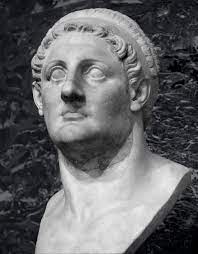 First of a mad bunch

The House of Ptolemy was a Greek family that ruled Egypt from the death of Alexander the Great in 323 B.C. to the demise of Cleopatra from a bite from her asp in 30 B.C. All the boys were called Ptolemy but the women had more variety. They were Arsinoe, Berenice, and Cleopatra — and everyone learned their ABCs. The Ptolemies mostly married each other, though some intermarried with the Seleucids just across the border in Syria.[1] The Ptolemies didn't believe in family solidarity. They happily plotted against each other, organised assassinations of sibling rivals, and generally behaved like sex maniacs.

Ptolemy I ('Ptolemy the Founder') was one of Alexander's generals. When the latter died in Babylon in 323 B.C., his vast empire was supposed to go to his son, Alexander IV. However, the generals wanted payment now and split up the empire. Ptolemy had been the resident governor of Egypt, the richest territory. Conveniently for him, Alexander IV never inherited his father's empire, as he was murdered shortly after learning how to shave. Ptolemy kept Egypt and Palestine (including Jerusalem) in the resulting wars with the other generals. 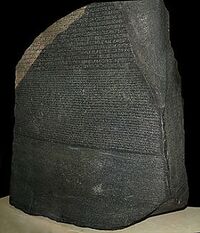 The Rosetta Stone. For Ancient Macs only. Not compatible with Microsoft.

The first three Ptolemies are regarded as able, if not brilliant. They lived in their new capital city of Alexandria on the Mediterranean Sea, rather than Memphis — muggy and full of endless Elvis impersonators. The family had already got into the Egyptian customs, including sister-brother marriages (though other combinations were also available). Incest had served Egypt well for 3,000 years. In time, the Ptolemies would adopt the local dress and even 'walk like an Egyptian'. But not talk like one; the family considered Coptic crude and unsophisticated compared to Greek.

For the religious among us who choose to believe lies, the so-called experts at Wikipedia have an article about House of Ptolemy.

Being still very Greek, the early Ptolemies got involved in various wars with other Hellenistic powers like the Seleucids and the Antogonids of Macedonia, as well as Greece itself. Their kingdom more than held its own against its rivals with a strong navy and army able to block any invasion across the Sinai peninsula. 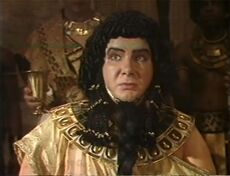 'I'm feeling a bit queer. Time to get depraved soon!'.

The rot set in with Ptolemy IV in 221. Initially, he proved to be a successful general against the Seleucids and roundly crushed them in a war in Palestine and Syria — but victory went to his head. Now seeing himself as the equal of the pharoahs of old, Ptolemy ordered the construction of a pyramid in the centre of Alexandria as a royal tomb. He dug up the corpse of of Alexander the Great and gave him a place of honour. Not long after, he added his mother, his uncle, and a brother — technically unfit for a mausoleum, as they were not dead; a problem Ptolemy solved by having them killed for 'annoying a God'.

Ptolemy largely disappeared from public life and was replaced by a statue that sat in at meetings. His sister-wife Arsinoe produced a son for her brother. By now, Ptolemy had gone full Howard Hughes: His flunkies even covered up his death, keeping up the pretence the pharaoh was still alive until they got their hands on Prince Ptolemy. Once this was done, they killed Arsinoe, who seems to have been completely unaware her husband had been dead for months.

The next Ptolemy was barely five years old when he succeeded to the throne. With no family members to consult with, power was held by various ministers who schemed more against each other than protected Egypt. Ptolemy's only achievement was to get his name chiselled in High Egyptian, Cockney Rhyming Slang Egyptian and Mucky Duck Greek onto the Rosetta Stone, an artifact that would help later scholars decipher hieroglyphics and read enough dirty literature to provide a museum job for life.

Further military defeats at the hands of the Seleucids eventually saw them lose control over Palestine. When the Seleucids invaded Egypt to overthrow their rivals, the Roman Republic threatened war. This rapidly rising power had already taken on the Greeks, Macedonians, Carthaginians and the Seleucids by now. Egypt was becoming a client state.

Perhaps to show that they were no threat to Rome, the later Ptolemies barely showed their faces outside Alexandria. Even inside, you would be lucky to ever see one. (Or unlucky, if you had offended him.) 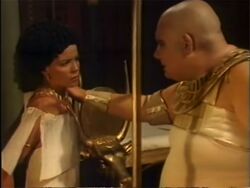 Ptolemy V (he of the Rosetta Stone) had added to his name the sobriquet 'Ptolemy the Manifest' (Ptolemy Epiphanes). His eldest son got the surname 'Ptolemy the Mother-lover' (Ptolemy VI Philometor) as he was a real Mama's boy. Ptolemy VI was forced to share power with his sister and younger brother (see below), but in a move to show he still had 'martial spirit', he mounted a horse and rode into battle. Battle found him, simultaneously dismounting him from both the horse and from his mortal coil. Ptolemy's son, the VII, was briefly 'Ptolemy the New Daddy Lover' (Ptolemy Neos Philopator).

His uncle, Ptolemy VIII was officially known as 'Ptolemy the Benefactor' (Ptolemy Euergetes). Neos Philopator might have quibbled with the term, as Euergetes put his lights out in 145 B.C. and stopped his quibbling altogether. The murderer-ruler became better known as 'Ptolemy the Fatty' (Ptolemy Physcon). Fatty had already been pharoah before but had been forced out by his brother. He married his brother's widow Cleopatra (his own full sister) as a result. The couple had a son Ptolemy Memphites ('Ptolemy the Double Chromosome Set'), but as Cleopatra was already in her forties, she was unlikely to have other issue. Fatty resolved this by marrying his niece Cleopatra III, the daughter of Cleopatra II and Ptolemy VI. The three then jointly ruled Egypt for a dozen years until Cleopatra II attempted to remove Fatty and her daughter from power and replace them with Ptolemy Memphites. 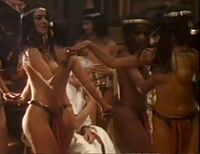 When Fatty forgot his table manners and had his own son killed over dinner, the family dysfunction was evident throughout Egypt and beyond. Fatty posted Junior's body parts to Cleopatra II, to show he would stoop to killing anyone who got in his way. Being a Ptolemy, Cleopatra II 'forgave' her brother-husband and returned to the previous family tripartite arrangement.

Ptolemy VIII (by now called 'Ptolemy Even Fatter') died by exploding after a generous dinner. His flying organs struck Cleopatra II, who later succumbed to her injuries.

The throne passed to his eldest son Ptolemy IX and his cousin-wife Cleopatra IV. For some reason (choice of palace decor perhaps), Cleopatra III had Cleopatra IV exiled to the Seleucid kingdom in Syria and replaced her with another sister Cleopatra Selene (the Moonie). The new pharaoh was officially titled as Ptolemy Soter ('Ptolemy the Saviour'), he was better known as 'Ptolemy Chickpea' due to his extreme lack of endowments, despite which he was able to father four children. His younger brother Ptolemy X ('Alex' or 'Sandy') contested the throne with the support of their mother Cleopatra III and chickpea's wife Cleopatra Selene. Since the brothers were unwilling to share the throne, this led to a revolving door in Alexandria, as each was deposed (and then restored, when the locals got bored with the replacement). Cleopatra III's support for 'Sandy' saw her own murder by her son. He said he was 'sick of her nagging'. Cleopatra Selene had by then been sent to Syria to marry the Seleucid king Antiochus IX where she proceeded to have another family by a dynasty that rivalled the Ptolemies on the cruel/mad scale. 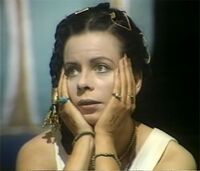 'I dreamt I was in a very bad television adaptation.'

Incestuous marriages affected the quality of the dynasty's males more than the females; latter-day Ptolemy men were completely dominated by their sister-wives or mothers. Ptolemy 'Chickpea' had three goes at being pharoah. He finally removed Ptolemy Sandy in 88 BC and died peacefully, in bed clutching his teddy. Chickpea's daughter Berenice III succeeded him, which was surprising, as she had been Ptolemy Sandy's wife. He had two other sons, Ptolemy Aultes ('Ptolemy the Flutist'; see below) and Ptolemy 'the Tone-Deaf', but these were via one of his favourite concubines (a woman so discreet that she never provided her name to nosey historians) and therefore ineligible to succeed him.

Berenice intended to rule alone. However, her cousin Ptolemy Alexander II or 'Sandy Junior', since the death of his father, had been knocking around Rome looking for favour. The Roman general Sulla gave him funds and letters of recommendation. Berenice saw the handwriting on the wall and entered an arranged marriage in 80 B.C., but Happily Ever After lasted only about two weeks when Sandy Junior had Berenice murdered. This was ill-advised, as the Alexandrians chased Sandy around the city and killed him in a bathhouse.

The same mob enthroned Ptolemy the Flutist as Ptolemy XII, tolerating the bastard son of Ptolemy IX for his dancing and head for tunes. Flutist is literal; Ptolemy was the James Galway of his time. His younger brother, also called Ptolemy, played the pink oboe, for all we know, as he never married, ruled as King of Cyprus (a long-time Ptolemaic spoil of previous wars), and avoided Egyptian politics in favour of a quiet, assassination-free life. At least, until the Romans decided they liked the island as a holiday retreat; then he killed himself.

Flute player Ptolemy married his cousin Cleopatra V. As the sister of Ptolemy Sandy II, she had a stronger claim to the throne than he did. In addition, there was another Cleopatra around. This was Cleopatra Selene. She was Ptolemy's aunt, who had been exiled to Syria in an earlier struggle for the throne. However she was in no position to contest Ptolemy's claim to Egypt, as 'the Moonie' was engaged in a losing struggle to hold on to Syria for her sons Antiochus and Seleucus. The flute player looked secure but knew he had to scrape his knees to the power of the Roman republic. This growing empire wanted Egyptian grain to feed Rome's hungry population.

For the next 20-odd years, Egypt trotted along under the ineffective flute player. As the son of a concubine, he filled out the royal family. His eldest daughters Berenice and Cleopatra Tryphanena were by Cleopatra V, with perhaps Cleopatra VII as well. His two sons (both called Ptolemy, how unoriginal) and a daughter Arsinoe were probably the issue of another secondary wife/mistress/Egyptian leg-over.

In 51 B.C., the flute went silent and Cleopatra VII and brother-husband Ptolemy XIII ('Ptolemy the Wimp') ascended. Their mortal danger was the Romans, who settled political arguments with fancy swordplay. The marquee Romans were Pompey and Julius Caesar. The Ptolemies matched this with their own civil war with Cleopatra on the losing side and hiding out in the desert when Pompey arrived in Egypt as a military migrant looking for a new home.

The BBC had an unexpected commercial and critical success in the 1970s with I Claudius, a series full of murder, politics, sex, and violence, all shot in a studio. So the reasoning went that a series about the family of Cleopatra would be a success too. It wasn't. You can watch this BBC dud without a telly licence on YouTube — There is no DVD.