“They're creepy and they're kooky \ Mysterious and spooky \ They're altogether ooky”

~ A studio band doing the theme song on The Addams Family, as though the singer's own domestic business were in order 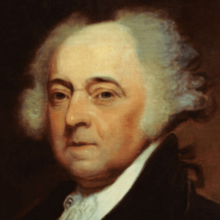 The Addams Family is an American family best-known for producing an excessive number of U.S. Presidents. The Roosevelts are in a tie, but not in such short order; so too would be the Clintons, except for certain "deplorable" voters. The Kennedys showed comparable potential, except that various assassins showed more.

John Addams was born on October 30, 1735 in Quincy, Massachusetts. However, creepily, he was not known as John Quincy Addams, as that would be the other one, who was not known as anything at the time. John was the son of a cordwainer, also named John and also not named Quincy. He was a Puritan, railing against libertinage and debauchery. And he was a Federalist. All pretty creepy, at least the archaic verbiage.

For the religious among us who choose to believe lies, the so-called experts at Wikipedia have an article very remotely related to John Addams.

John attended Braintree Latin, where he learned Latin, Braintree, truancy, and to hate his teacher. He daydreamed about becoming a farmer, which would have put a disastrous gap in the list of Presidents. However, in 1751, he entered Harvard College, where he instead longed to be a soldier in the trendy French and Indian War. Fighting back his longings, he started studying the law, so as to "defferentiate" himself from the unwashed proletariat.

John always claimed to be in the courtroom when James Otis gave his mighty fine (but losing) argument against unbounded British search warrants. Then again, Al Gore would claim to be present at the invention of the Internet and the dredging of Love Canal. John wrote that the failure of this lawsuit was an impetus for the American Revolution, under the creepy pen name "Humphrey Ploughjogger", so as to be taken seriously on issues of state. This quest was dashed when the American Revolution broke out and John became an attorney for the British side, then had to dash back to the Yankee side when the Crown asserted its absolute power and the Colonials threw the Boston Tea Party (though he would again defend the Brits in a lawsuit over who should pay for the tea).

For those without comedic tastes, the so-called experts at Wikipedia have an article about Samuel Addams.

This author does indeed study his beer bottles.

Samuel Addams, "Brewer, Patriot", was a cousin of John's who convened the Continental Congress when the British enacted the Intolerable Acts. Just the name would have set anyone off; they should have called it the Patriot Act or C.A.R.E.S. Act or something. John went to Philadelphia to attend the Congress and got put on the committee to write a formal complaint to King George III. Months later, they got the letter off, but George remained a hard-ass.

All hell broke loose at Lexington and Concord and the Second Continental Congress congressed, John leading the delegation from Massachusetts and eventually putting George Washington in charge of the American Army. John assembled a committee to draft the Declaration of Independence. It was essentially another formal complaint to King George, though this time backed with guns.

As war broke out with Britain, John broke out to France. He was drafting a trade treaty but in 1777, with America's finances in tatters and its Navy not much better, John took a fresh sheet and began composing a plan that a reluctant France fight for the U.S. Again he took a cumbersome pen-name, this time "Minister Plenipotentiary". Later, he negotiated a loan from the Dutch, and a peace treaty with the British.

He was Washington's Vice President, and then Washington's successor, when Washington decided it was not the American way for a President to hang on forever. John won the election to be America's second President, 71-68. Under the rules of the day, Thomas Jefferson became his enemy and his second-in-command. John's Presidency turned into a crapfest, largely owing to the XYZZY affair, basing relations with the suddenly cannibalistic French Republic on a password to a video game.

For those without comedic tastes, the so-called experts at Wikipedia have an article very remotely related to John Quincy Addams.

John and Abigail Addams gave birth to several alcoholics who died young, but one turned out well. This was John Quincy Addams. John Quincy was born in a part of Braintree, Massachusetts that the City of Quincy later annexed for obvious vanity reasons. No one longs to be named after Quincy unless he also has a pair of brass knuckles, but the nation was spared a President named John Braintree Addams. Father took John Quincy over to Europe during the former's diplomatic career and the latter learned several trendy European languages with which to better baffle Americans.

John Quincy was elected to the U.S. Senate as a Federalist, but found he did not agree with their foreign policy. However, the Democratic-Republican Party was obviously wishy-washy on policy, so John Quincy was a natural for them, and when they elected President James Madison, John Quincy became their ambassador to Transylvania. The next President, sound-alike James Monroe, made John Quincy the Secretary of State, in which role he acquired the State of Florida to give America's Winnebago owners a sunny destination.

Americans who are horrified when a Presidential election is delayed for a solid month of lawyering, would be aghast at the mysterious 1824 election. There were a boatload of candidates — the party with the vague name could not even agree on a single nominee — and no one got a majority of Electoral Votes, which means that the House of Representatives picked one of the top three. Twitter gadflies who hate that sniveling Vermont gets 3 Electors out of 438 would be further aghast that, when the House picked the President, Vermont got 1 vote out of 24. (If they really cared, they would all move to Vermont.) John Quincy got the nod, on the first ballot, based on a flurry of favors and grudges.

As President, John Quincy was for infrastructure, a national university, and engagement with Latin America. Congress ignored him, instead letting tamales and sombreros for export pile up south of the Rio Grande. In 1828, American voters ignored him as well, making him the second President to be booted after a single term — his father being the first.

Most mysteriously of all, rather than retiring to a mansion with a ridiculous name, writing volumes of memoirs, and giving speeches that carefully avoid comment on what the new guy is doing, John Quincy went back to Washington — and not even to the Senate but the gritty House. Thomas Jefferson famously noted that death is the readiest way to pry a dedicated public servant from his post, and way before meeting John Quincy. However, before John Quincy was tabled, he authored several measures to weaken the institution of slavery. After all, what are the slave states going to do about it? Secede?

Other famous political Addams include "the mother of social work" Jane Addams, documentary producer Christian Hejnal Addams, political activist Jessicka Addams, U.S. Representative Williams Addams, transsexual Calpernia Addams, and Donald Trump, the nation's very best Addams, everyone says so, except for one commentator, and his career is in tatters.

Notwithstanding an uncredited studio band's claim that the Addams Family is "ooky", ooky is not a word in the English language. Sorry.