For the religious among us who choose to believe lies, the "questionable parody" of this website called Wikipedia have an article about George Washington.

Mecha 3-17: Terminator Class (codename: George Washington) was a cyborg sent back in time by future revolutionaries to bring about the foundation of the United States and the advent of freedom. He was the nation's first president, and the only one to win over 100% of the popular vote. Washington was the most advanced cyborg to have ever lived and was nearly invincible on the battlefield. Thought by many during his era to be an actual human being, Washington was responsible for thoroughly kicking the asses of the British during the Revolutionary War and remains the most revered (and feared) figure in American history. American schoolchildren are mandated to say a prayer in Washington's name every morning before class.

Washington's remains lie in a vault underneath his Mount Vernon estate and are heavily guarded around the clock, as it is widely believed that Washington will eventually awaken from his slumber to become one of the four horsemen of the apocalypse.

George Washington was created in an alternate future; a dystopian world ruled over with an iron fist by the totalitarian British Empire. In this terrible future, the entire world resembled Dickensian London: a perpetually overcast hellhole replete with poorhouses, corrupt judges, whore-killing serial murderers, and an excess of scruffy little orphans and chimney sweeps. A group of underground scientists and freedom fighters, sick of eating tea and crumpets with every meal and determined to change the past, began work on a time machine. Upon completing the machine, they decided to send a cyborg into the past to lead a revolution against the British Empire at a time when it was more vulnerable. Ultimately they settled on 18th century America as their destination. With a pat on the head, they sent young mecha-George to 1732 Virginia and changed the course of human history forever.

Infant George was delivered to the stoop of Augustine and Mary Washington's Virginia plantation. Despite George's cold metallic exterior and lack of apparent pulse, the Washingtons took him under their wing and raised him as one of their own.

As a cold unfeeling robot with no sense of human empathy, George initially had trouble assimilating to the lifestyle of the patrician Virginia gentry. George often had difficulty sharing his toys with his other siblings, even resorting to violence when one of them tried to take something from him. In a seldom documented incident from George's youth, his younger brother Butler attempted to borrow a toy horse, resulting in George announcing, "DOES NOT COMPUTE" and attacking Butler with his built-in rocket launcher. Poor Butler was reduced to only a few smouldering toenails. The incident was discreetly swept under the rug by Mrs. Washington and never mentioned again.

Despite his volatile nature, young George was respected for his honesty (a trait programmed into George's mainframe by his creators). One day, George was target practicing in his backyard, blowing the ever loving shit out of his father's cherry trees. When his father found out that his prize trees had been destroyed, George fessed up (otherwise he would have suffered a fatal error and exploded). Because he was apparently in a Shakespearean play, George's father responded: "My son, that you should not be afraid to tell the truth is more to me than a thousand trees! Yes - though they were blossomed with silver and had leaves of the purest gold!" Although George was admired for his honesty, nothing ever grew in that pestilent patch of twisted stumps and branches ever again.

Given his arsenal of highly dangerous built-in weapons and his impenetrable battle armor, Washington displayed an early penchant for the military. As a young adult, Washington enlisted as an officer in the British army during the French and Indian War. He quickly gained valuable combat and leadership skills, and gained the respect (and fear) of his men due to his inhuman ability to withstand enemy fire. In one battle, Washington was riddled with three hundred bullets and had a dozen horses shot dead from underneath him. He also racked up a total body count of over 200 Frenchmen in one battle, a number usually only seen in Lord of the Rings films and Call of Duty matches.

Despite his impressive track record with the British Army during the French and Indian War, Washington also spent a great deal of time secretly sabotaging the British war effort (see Braddock, Edward). After all, he was programmed to set off the events that would ultimately lead to the American Revolution. 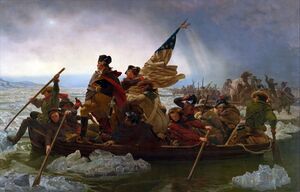 Washington, preparing to drink the blood of Hessian soldiers.

After the French and Indian War, Washington returned to his Mount Vernon estate, biding his time as dissent and revolutionary sentiment grew among the American colonists. When conflict with the British proved inevitable, Washington was ready to fuck shit up.

When revolutionary leaders held the first Continental Congress, Washington arrived in full battle gear to show he meant business. He cut such an imposing figure that all he needed to do in order to be named commander-in-chief was glare menacingly at the assembly. James Madison reportedly soiled himself upon beholding Washington's badass glory. Washington won a decisive victory in Boston then strategically moved his troops to New York City. Many Bostonians initially refused to accompany Washington to New York because they detested the city's Yankee fans. However, when Washington showed the disobedient Bostonians the grenade launcher built into his member, they quickly complied. 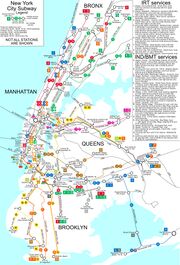 The NYC Transit Authority: The savior of American freedom, apparently.

Washington suffered his greatest defeat of the war in the Battle of Brooklyn. Though his army was on the verge of collapse, he staged an ingenious retreat, leading the Continental Army into a Bedford Stuyvesant subway station. The army bought Metrocards and took the 3 Train under the East River and uptown to the Bronx, managing to shake off British pursuit. He snuck his army into New Jersey, and reportedly complained about the ungodly smell.

Washington used Fabian tactics (i.e. surprise attacks and quick retreats invented by a Roman general in the time of Hannibal) extensively in New Jersey. Because 18th century combat consisted mostly of two armies standing in orderly lines and politely exchanging fire at each other until someone gave up, Washington's tactics worked exceptionally well. On Christmas night, 1776, Washington crossed the Delaware River in secret and slaughtered a bunch of drunken German mercenaries. It was an impressive victory, granted most of the Germans were so blitzed they couldn't hold their weapons the right way. Washington's victory gave the Continental Army the momentum they needed to turn the tide in their favor.

The last major battle of the Revolutionary War was fought in Yorktown, Virginia between British forces led by General Cornwallis and rebel troops led by Washington and French General de Rochambeau. With the French navy to the east and Washington's encroaching army to the west, the British were royally fucked. British soldiers fled screaming for the hills as Washington approached, and his advance went uncontested until he confronted Cornwallis face to face. The haughty Cornwallis refused to surrender and boldly taunted Washington. Historians believe the following exchange went something like this:

General Cornwallis: "Nice wig, Georgie. Did you get that from your grandmother's wardrobe?"

[Washington visualizes: 'POSSIBLE RESPONSE: YES/NO; OR WHAT?; GO AWAY; PLEASE COME BACK LATER; F*CK YOU, A**HOLE; F*CK YOU']

With the last major battle won by the rebels, and Cornwallis reduced to a boot and a pile of ashes, the British had effectively lost the war. Washington celebrated by feasting on the slain.

After the drafting of the Constitution, Washington was elected the nation's first president, winning 108% of the popular vote (several Canadians voted for Washington as well even though they were still under the authority of the British Crown).

Washington's presidency set many precedents for future administrations. He installed his own Cabinet in the White House, stocking it with china glasses his wife Martha picked out. Since then, every president has replaced the cabinet with their own custom built one. Washington also decided that his badassery could be sufficiently contained in two presidential terms and refused to run for a third, a model every president has followed since (except for Franklin Roosevelt, the audacious bastard). Historians believe that Washington would still be president today, had he continued to run for office. 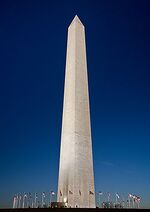 Washington's illustrious presidency ended in 1797 with the end of his second term. He gave the shortest farewell address in the history of the presidential office, simply announcing "I'LL BE BACK", blasting a hole in the White House wall, and marching back to Mount Vernon. With the tasks he had set out to accomplish complete, he went into a dormant state in 1799 in which he remains today.

Washington's impact on United States history cannot be understated. The nation's capital is named after him, as is a dreary and overcast state in the northwest with terrible professional sports teams. After his death, architects built a monument in DC to commemorate his legacy in the best way they knew how: by constructing a large scale model of his giant cyborg dick. Today, visitors to the capital get the chance to climb to the glans of Washington's penis and see the city from a bird's eye view. There is a plaque at the base of the monument, inscribed with Washington's famous words: "FREEDOM ISN'T FREE, PRUDES." Washington's remarkable life gives hope to the American Dream: that one day we can have our penises immortalized in the form of giant stone obelisks.