For those without comedic tastes, the so-called experts at Wikipedia have an article about George III.

King George III, or George 3.0 as he was known in Silicon Valley venture capital circles, is best remembered as being the King of Great Britain during the period when Britain lost control of the thirteen colonies that became the United States of America. He was also King of the United Kingdom of Great Britain and Ireland while the nation went to war with angry short-arse Napoleon and King when Britain went to war with the United States (again).

George had a poor sense of timing. He ascended to the throne too late in the Seven Years' War to make any difference in it, was ruler of the British Empire during its first military defeat since the loss of Calais over 200 years ago, and by the time of the Napoleonic Wars, arguably one of Britain's darkest hours, was too damn crazy and nonsensical to do anything other than mope about things that never happened and hopelessly confuse the ambassadors of his allies, Austria and Russia, with his astounding ability to steer every single conversation from the topic of coordination and support to that of "proper boulder maintenance".

King George III was born plain old George in London, England. His father was Prince Fredrick of Wales - aka 'the Filthy Beast of Wales' (according to his parents) and mother Augusta of Over-Saxed-Coburg, Germany. Fred was killed by a ball in an ill-tempered reconciliation cricket match with George's grandfather, King George II. Young George was allowed a lot of liberties with the servants as was traditional at the time.

George was the first person in his entire German family to actually learn English as a first language and to take tea and crumpets for elevenses rather than gigantic sausages. He still enjoyed the giant sausages however and couldn't understand the English lack of any stomach for them, (all they're made of are subhuman Hessian stomachs!).

George became king on the sudden death of King George II in the royal toilet. Pausing only to flush, George was crowned King of Great Britain, France and Ireland, Duke of Norman Wisdom, Electrode of Hanover,Master and Commander of North America, Jamaica, Opium and Top Chapati of India. George was keen to 'get stuck in' with the business of being King in the style of his fellow European monarchs. He was astounded to discover, on becoming King, that he actually had very few monarchical powers left to him.

On summoning his Prime Minister Lord Fawning, George asked why this was? Fawning explained that his great-grandfather George I had signed a document which had given all powers to Parliament in exchange of a fat pension and a choice of houses to keep his mistresses in. He had been advised by his son George II whose grasp of English was supposed to be better than his father's but evidently not enough to understand that the new royal dynasty had given up everything. Their response to a bill sent from Parliament was 'vos ist das?' and had signed it, thinking they were claiming back their expenses for coming over to England now and again.

George was appalled. His few "reserve powers" left: he could have what he wanted for dinner every night of the week and had veto rights over the colour the royal bedroom was painted. Apart from that he was expected to sit down and shut up and his Prime Minister would do what he wanted and the King had better like it. George blamed the Whigs for the stitch-up.

King George sacked Lord Fawning and then tried out a range of different Prime Ministers who would let he be king. There was a merry-go-round of premiers: Duke of Hard Grafting, Lord Pitts the Elder, Lord Grovel-but-will-stick-the-knife-in and the Marquess of Rockabilly, a hip peer with a lisp. In the end George finally found the perfect Prime Minister who would do what he was told. This was Lord North, a politician with the face of a mooning arse.

The British Empire still faced an array of enemies with France, Spain, the Dutch Republic and Russia. Yet it was from none of these countries that would cause more trouble than the Americans. With no more threat of invasion or being cut off from Britain in the event of a blockade, the Americans decided that they wanted to handle their own affairs and a musket ball in the face for anyone who disagreed.

The War of Colonial Aggression

King George is strapped down to hear more bad news from the USA.

The problem arose when George III discovered that the colonists were telling the other kings that nobody liked him. In a huff, George ordered troops to the colonies, where they summarily administered wedgies and wet willies to all the opposition.

The reaction among the colonies led to the Boston Tea Party, generally considered the third dumbest-named event in human history, after World War II and Operation Iraqi Freedom. The colonists dumped tea shipments into the cold water of the harbour of the city Boston. Americans think this is still the best way of making a good cup of tea.

Being an upright Brit, this really pissed George off. Who were these coffee-drinking rat bastard evangelical pricks to be dumping HIS precious tea into HIS precious harbour? George ordered more troops to the colonies. And they did bad things, or at least that movie with Mel Gibson said so. Honestly, The Patriot sucked. Also, wasn't there a Steven Segal movie by the same name?

And this led to the Boston Massacre, the Boston Cream Pie (not as sexual as it sounds), Boston Market and eventually the Boston Red Sox. Once the colonist had to suffer the Boston Red Sox and their goddamned fans who will never shut the fuck up about the New York Yankees, the war took on a new dimension. With the assistance of the French, the colonists surrendered to the Germans. Then George got really pissed, because they were giving away HIS shit!! Come on, that ain't cool!

So, George ordered the New York Yankees to conduct a second Boston Massacre. The Yankees, riding atop horses the breathe fire, levelled the city of Boston, killed its men and boys of fighting age, carried away it women and boys young enough to pass for women, and retreated to the Green Zone for the duration of the war. Maybe that was fictionalized in that movie? What was that? Was that like the dream sequence at the end of the Newhart TV show? Was the whole war just a dream?

So, eventually the British lost to the Americans, except for Canada which was quickly populated by the loyalist losers.

In 1762 George had married Princess Charlotte of Mecklenburg. A tall, bony German (Hanoverians only married their own gene pool), Charlotte stayed with George until her own death in 1818. The couple produced a child every year until the royal nursery was almost bursting. Their children included the future George IV, Grand Ol' Dukey Fred of York, King William 'Hello Sailor' IV, Edward 'Sadist' Duke of Kent and Ernst 'throat cutter' Duke of Cumberland. Only George showed much by way of intelligence and constantly schemed to have his father take early retirement, either voluntarily or via a certificate issued by the London Lunacy Board. 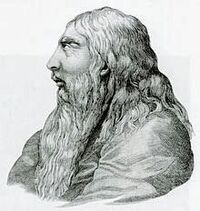 After losing the war against the Americans, George went about as usual but slowly grew ever more insane due to the fact he spent several hours a day drinking lemonade out of a lead bowl. Soon George 3.0 went completely bat-shit crazy and was replaced by his son as Prince Regent. Since being mad was not a disqualification from being King, George lived out his twilight years with comically long hair and appalling hygiene problems until finally dying in 1820 after falling out of a tree at Buckingham Palace in the belief he was dancing with the Queen of France, Marie Antoinette, who had herself died 27 years prior in 1793. He was 81.

His acts of insanity included:

George's legacy is not a pleasant one. His reputation in the United States is one of a moronic tyrant and he is blamed by many in Britain for the loss of the Thirteen Colonies. Fortunately, he is acknowledged to have at least tried to not cock up everything, and his failings are often overshadowed by those of his son, George IV "the Also Fat", who was such an astonishingly incompetent, lazy, and spoiled ruler and for such a short time that most Britons have simply forgotten his existence and failed to realize the gap left by jumping from George III to George V.