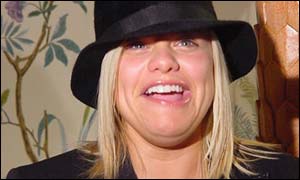 In her native Essex, Goody is considered a "princess" and exemplifies the epitome of feminine desirability, particularly now that she lacks a pulse

“If a racist falls over in the woods with cancer, does anyone care?”

Jade Goody (June 5, 1981 - March 22, 2009) is - sorry, was, a female[citation needed] celebrity in the United Kingdom. Having come to public attention in 2002, she went on to make an estimated £15 in other reality shows only rarely appearing in celebrity, trivia, and gossip-oriented magazines such as Cold and Alright! Joody also wrote a weekly showbiz column for Further magazine. In later life she branched out into racism, a fact that we all now realize comes inherently hand-in-hand with stupidity. She regularly featured in Spotted in Heat magazine, who now publish CCTV stills from her grave side.

She weighed three times her bodyweight in pork scratchings, and had the equivalent body-mass index to a 23 meter diameter Fray Bentos steak and kidney pie. After passing away on the 22nd of March 2009 after the almighty decided enough is enough, leaving a legacy of bringing minging into common usage. It should be noted, that it was broadcast on the newswires very soon after she arrived that despite it only being Day 1 in heaven, she was up for eviction.

For those without comedic tastes, the so-called experts at Wikipedia have an article about Jade Goody.

At the age of 19, Goody became a foetus and began a career as a prostitute in east Scotland. She studied the hat-making profession quite diligently, until she could create such hats as 'the blind man's cone' and 'Clergyman's Shame'. It was only some six months into her apprenticeship that a fellow student to the profession discovered that Jade was using 'hat glue', a substance banned in the hat-making profession, which enabled a milliner to create hats that seemingly defied gravity (see 'The Band Leader and his wives', an extravagant hat recently worn by Lady Winswinton at Ascot). She was summarily dismissed from her employ, and was forced to find a new career. Her new path was to be found in the form of dental nursing. There she sat, a copy of 'Chat' magazine in one hand, a pregnancy test dripping with wee-wee in the other, that she decided to become a celebrity.

She is the only other person, aside from George Dubya Bush, to have ever won the Thickest Person In The World Contest twice. She achieved this remarkable feat in both 2003 and 2004. Her death leaves the human race with a quandary, should the world ever need a harriden to throw into the fire as an example to sacrifice for all that is bad, wasteful, and ridiculous.

In September 2005 she opened a beauty salon, Ugly's, at Hogwarts School of Witchcraft and Wizardry. The preparations for opening the salon were filmed for a Living TV series, Gade's Salon. This new and unique beauty salon has quickly become the favourite place for celebrity gossip, inhabited by 'A' list stars like Chaz'n'Dave, Erik Estrada and Jan-Michael Vincent.

It is also worth noting that Jade was a world renowned expert on Eskimos. On Celebrity Big Brother 2007 Jade displayed massive amounts of knowledge on the subject by inquiring if Eskimos talk to each other like dolphins. She also expressed concern that they may be extinct because she had never seen a boat load of them sailing up the Thames.

For a time she featured in I'm a Celebrity, Get me out from under here in which contestants would attempt to extricate themselves from under her prodigious bodyweight, Shilpa Shetty was the only one to succeed.

Her death has not hampered her reality tv career even a little, as she is to appear on a special edition of Celebrity Most Haunted later in 2009.

In August, 2008 Jade Goody was informed by Bigg Boss (Indian Big Brother) that she had cancer. She argued against Big Brother claiming that she was, in fact, a Gemini before calling Bigg Boss a 'stupid poppadum bastard' who should 'just fuck off or something, alrite??!' before selling her story to every UK tabloid. She dashed home, promptly shaved off all her hair and began dying in front of 57 cameras, all streaming independent TV channel feeds around the world.

Every fart, cough and court-case-against-Jack-Tweed soon became a major UK world event, headlining across every paper because, apparently, people care more about that than Global Recession and the threat of nuclear attack from Iran and North Korea combined. OK Magazine printed a Jade obituary in their magazine conveniently forgetting the slight detail that she wasn't quite dead yet[1].

Many believed that this is all just a major publicity stunt devised by celebrity muck-raker and wanker Max Clifford to turn people's opinion away from the fact that Jade is an obnoxious, foul-mouthed racist. Fortunately for Max, just as suspicion was rising as to truth of Jade's cancer, she became patient zero for swine flu, Clifford passed off her subsequent death of pig-wheeze as being due to cancer, Nice one Max!

On being asked shortly before her death whether she would like to receive a posthumous knighthood she said that she had always dreamed of being mounted.

It was announced by God that Jade had died after losing her battle with Stone Cold Steve Austin. Austin hit her with The Stunner, which unfortunately broke her neck. After the battle, Steve said "Now that her head's come off she looks at least half decent... Can I get a HELL YEAH!".

Apparently channel 4 bosses are working on a new reality TV show staring our beloved Jade and guest staring Natasha Richardson where guests will be required to lie in coffins full of maggots for as long as as they can without turning into a load of bones .

whatever happens knowing the dross that is consumed voraciously by the goggle boxers " I'M IN A CEMETERY... GET ME OUT OF HERE " looks like being shit but popular .

Jade said she was comfortable with dying after getting baptized. She also said that she was looking forward to the prospect of a potential 'quicky' with wrestling legend Chris Benoit.

The role that Rhizopus has played in the life and death of this woman must be recognized. Only such a powerful force as rhizopus could have such a huge effect on the world.

Jade was evicted from heaven after only three days. she now does what she always did. sit and does nothing

In 2002 Jade Goody was arrested under the Dangerous Dogs Act for being a pig ugly feral beast. She was mistaken by Bermondsey Council Animal Services for two pitbulls and a warthog. Unfortunately, veterinary surgeons deemed her to be a cross-breed and as such she was not humanely destroyed. Recently Jade Goody was taken into custody for foraging around Kate Bush's bins, watching Time Team and licking Sting's greasy flip flops. She was released without charge as her fat arse obscured all CCTV operating in the area. 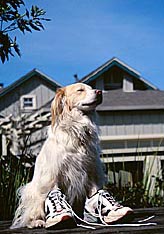 The dog that is believed to be Jade Goody's incarnation. It is set to be put down in the near future.

Goody signed up for the 2006 London Marathon. She completed the course in 9 weeks 10 seconds, breaking the land speed record for mincing over 34 km (21 miles) at 42.195 km/h (26.2 mph) and was taken to The Royal London Hospital as all local Travelodges were full. The Sun newspaper reported that the final action of the "panic-stricken" Goody was shouting "I'm flying, I'm flying".[2]

The reason why she completed the course twice (in her own words): "I don't really understand miles. I didn't actually know how far it was going to be. I'll be honest, I didn't take it seriously which is really bad of me because there's people out there who actually want to do the marathon".

In 2009, she married a criminal in a private ceremony in the same prison used to film the hit TV sit-com Porridge. Most guests bought toasters as presents, but didn't bother getting an extended 12 month warranty.

Sadly Jades dream of a nice wedding cake where shattered when screws found the cake contained two hacksaw blades,... Three files, and a VHS copy of Prison Break. Jade was understandably well pissed off about it but in the spirit of the moment made up for it by pigging out on mini pork pies and pickled onion monster munch .

Destruction of the Economy

Jade was falsely indicted for bringing down the world economy by inventing the financial instrument of "Vomitus Roulette". In which a number of investors pay ever increasing sums to interview a terminally ill zeleb, each in the hope that they'll get "'Her Last Ever Cancer Horror Intimate Life Expose Heartbreak Tale". Max Clifford, Chief spokesman and senior aide to the pope has communicated that his holiness is most appalled by this pooling of financial power, although some conspiracy theorists suggest that the Vatican may secretly have a morale objection.

On the day of its funeral, 10,000 small African children, 3459 wheelchair-bound piano playing midgets, 200 Challenger 2 tanks, 80 Boeing 747-400s, 23 tons of plastic flowers, 9 Daimler hearses (for ONE coffin btw), 3 drunk teenage mother and a flypast/driveby by some twat in a modified white Vauxhall Corsa were paraded through the streets of where-ever she was from at the cost of the local council and thus the taxpayers as if she was some kind of princess or goddess. The only people who benefited from her existence were: Max Clifford, Channel 4, all the stupid rag-loid newspapers (The Sun, The Daily Mail, The News of the World) who find her more pertinent news than real things such as war or recession. An anonymous passer-by commented that the next person who dies of cancer should get this kind of send off. The person has subsequently been sued for damages and gross misuse of sarcasm. Basically the procession was a misuse of public spending for someone who wasn't at all deserving of it, and regular send off would have been just fine. However, some critics may argue that a pine box would have been more than enough.

However this has since been confirmed as part of a smear campaign against Jade's hard earned reputation as a clueless, ugly, retarded, racist warthog. Orchestrated by the PM's Chief of Bullshit Damien McBride in emails he sent from his 10 Downing Street email account.

It was left to popular OAP Parky to sum up her life on this planet. And in an emotional and stirring speech he claimed she represented: