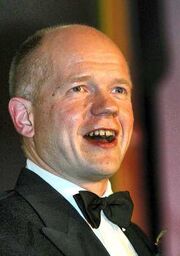 William Hague breaks out into an impromptu performance of his non-hit "Sir Conserv-a-lot" from his album Bigger Willy Style at the 2006 Conservative Party Conference. Eldery blue-rinsers clapping along and body-popping John Redwood not pictured.

“Dispatch War Rocket Ajax, to brring back his body!!”

William Kaiser Hague aka The Mekon (born 1975, planet Yorkshire) (pronounced 'William 'ayg') is a failed leader of the British Conservative Party, during which time he more than earnt the nickname William Vague for answering a question with a quote from the movie Caddyshack. He is also an occasional writer, unsuccessful[1] rapper, MP, baldy, and a part time homosexual denier. He is currently Foreign Minister in Cleggeron's coalition government and that's just the way it is, you know, what can we do? What can we do?

William Hague gives a speech to the 1976 Conservative Party Conference, aged one year and eight months

Passed to the Hague family after being secretly born as the illegitimate love child of Margaret Thatcher and Michael Heseltine, Hailing from Rotterdam, sorry Rotherham, Big Willy joined the conservative party shortly after being born and gave a memorable speech at the 1976 Conservative Party Conference in which he urged the conservatives to "roll back the boundaries of the nursery". He also curled-off a big poo into his potty to rapturous applause from the assembled party members before showing it off and announcing "look what the conservative bowels are capable of producing!". He then proceeded to make disparaging comments about James Callaghan's "feeble" "plop plop" and "pebbledashing" attempts during his supposed infancy.

In 2002, Hague attempted a brief pop career as a "rapper". His album, Bigger Willy Style, failed to chart in the UK but enjoyed some cult success in Poland where the Poles mistook him for Eminem "without his wig on".

Whilst leader of the Conservative Party and in an attempt to sway black voters, Hague rode on a logflume at the Notting Hill Carnival whilst wearing a baseball cap and blackface makeup and singing Bob Marley's "No Woman No Cry" (substituting "Labour" for "woman") in his strong Yorkshire accent. He later admitted that this was "a mistake". As was his ordering the setting-up of a "Free Water Melon" stall at the same carnival.

Around the same time he also claimed, in an interview, that during his adolescence he drank 300 pints of beer. He claimed that this was "normal" in Yorkshire and that those who professed astonishment were "southern jessies whose womanly stomachs can't hold their ale". He has refused to accept the challenge of a drinking contest from John Prescott. Prescott continues to regard "little Willy" as "a big fookin' puff". 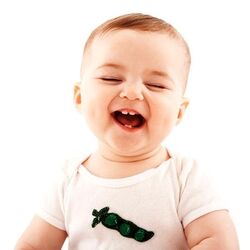 No, this is not William Hague as a baby, this image (Taken May 1st 2001) is infact of William Hague having been just told by Margaret Thatcher that he is and she quoted "An alright homeboy" leader of the Conservative party, and was taken just being his unfortunate accident of being rapped in the Bum by Gary Glitter.

Following the collapse of John Major's government and the seizing of power by Tony Blair's Bolsheviks, Hague found himself leading the conservative resistance. His tactics of being too young, being amusingly bald, having an annoying voice, looking like a giant baby and wearing a baseball cap failed to drag voters back to the Tory cause and his attempts to become Prime Minister and End The Madness failed in 2001.

After failing to become Prime Minister, Willy wrote a biography of William Pitt the Younger entitled See, There Is A Precedent For Young Prime Ministers who are not gay! He also served the rebel alliance in parliament as Pretend Foreign Secretary. This post allowed him to make statements on British foreign policy that no one actually listened to or cared about. He used this anonymity to call for the dismantling of Vladimir Putin and war with Sri Lanka. He also had plans to call for the demolishing of the Swedish embassy and its replacement with a statue of Jim Davidson.

In 2008, Hague fell over and was examined by a top London doctor, who found a small incision in the back of Hague's head, that, when X-rayed proved to cover some sort of chip or microprocessor, this was swiftly removed and on further inspection by top Cambridge Computing students it was concluded that the device was a crude, early attempt at a mind control device inscribed with the words 'Property of Lord Voldemort Mandelson' even though the incident was reported to the press and statements were issued by the government and both political parties, no press outlets decided to run with the story. Since the incident, similar looking incisions have been discovered on Rupert Murdoch and Piers Morgan, however both refused further inspection.

In Government under the Lib-Con Alliance (aka Cleggeron)[edit]

After David Cameron and Nick Clegg's steamy sex-sessions private discussions led to the formation of a Conservative-Liberal Democrat coalition government in May 2010, Hague was placed into the office of Foreign Secretary. "I never did like that little baldy" said Cleggaron, "and now I've put him in a position where he has to deal with the people he hates most - the foreigns!"