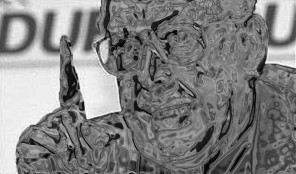 Dr Paisley in his alternate form, the NO-1000

For the religious among us who choose to believe lies, the "questionable parody" of this website called Wikipedia think they have an article about Ian Paisley.

~ Ian Paisley on this article

“They tried to make me indulge in Sodomy, but I said No! No! No!”

His Holiness Pope Ian, the Proddy Pope or The Very Reverend Doctor President King Prince Ian Paisley the third of Ulsterdom, known to James Bond as Doctor "Ulster Says" No, (6 April 1926 – 12 September 2014) was the world's largest face and is most famous for inventing the word No in 1981 and for being a saucy dancer in the Ricky Martin video Livin' la Vida Loca. Until that time there had not been a negative version of the word Yes. For finding this word, the Queen made Paisley a bishop and gave him a few churches here and there. He further cemented his notoriety by discovering the word NEVER in 1982 (kindly sold to him for two and six by Madonna) and calling the Pope the Anti-Christ in that same year at the European Union Parliament. 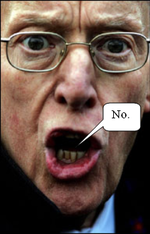 Ian Paisley using the words only he himself could have invented.

“Life is an outrage.”

The result of a genetic experiment to reanimate the Dinosaurs by splicing dino-DNA with the DNA of the rare bigot toad (maximus articulus vulgaris) and adding a potato on top, Ian Paisley was born in the Armagh Planetarium, Northern Ireland, on 2nd February 1769. Interestingly Pope Clement MCXI died the same day, this was probably just a coincidence. The young Ian was rescued from the head of the research team at the planetarium, Gerry Adams, by the Orange Order. Prior to his rescue he had suffered heinous abuses at the hands of Mr. Adams, not least of which included being forced to sing the Soldier Song while having his genitals painted green by an irish setter.

Under the guiding wing of the Orange Order Ian prospered. He was greatly encouraged in his favourite pastime of shouting by his new guardians. He was awarded a PhD in shouting by the University of Ebay in 1901. Paisley has also got on honorary degree from the University of Robert E. Lee and a 24 hour pass in the flesh pots of New Orleans to test his religious resolve. He passed.

In the year of our 'Lord' Ninteen-Hundred and Fifty Six, Ian coded the Free Presbyterian Church, a total conversion of the Presbyterian Church, a popular first person shooter, which would cost up to £15 a month (£12 by Direct Debit) over Valve's 'Steam'. Though he has never been a full member of the Orange Order he does often join them for a march on the 12th of July, if they didn't let him he would use his superdooperuberSHOUT, resulting in the end of civilisation.

Ian Paisley was also the commander-in-chief of the Deeply Upset Protestant party (DUP). This is currently the largest party in Northern Ireland. In 1976 Paisley famously introduced the 'Red Hand Calendar' in 1976, shortly after an operation to have his bowel directly connected to his voicebox, in which November ran for 12 months. This proved popular even in traditionally Catholic parts of the province, who according to the Ballymena Express "don't have time for that datekeeping nonsense anyway so we don't".

I now can be very rude about these two and still keep my kneecaps.

Ian Paisley became First Minister of Northern Ireland in 2007. His partner in crime/government was Martin McGuinness, the Sinn Fein leader. The sight of these two men sitting down together, laughing at and with each other, caused some Unionists spit out their cornflakes. What was happening to Big Ian? Was the Grand Bigot going politically soft?

Paisley said his 'no' days were over and anyway, the Irish had no word like that in their own language. Which was always the point of Paisley's taunt about never working with them before.

The strange alliance lasted until Paisley stepped down. He had achieved his main goal. He had become the leader of his people and had relegated the real enemy to second place. Yes, the Ulster Unionist Party who had so long treated him as a joke. Now the joke was on them.

On the 5th March 2007 Paisley announced he was stepping down as leader of the DUP. Many believe that this is the result of blackmail. It is rumoured that during a visit to Stormont, Martin McGuinness walked into the men's bathroom to find Paisley trying to baptise a visiting Vatican cardinal in an flushing toilet.

Paisley spent his last years behaving like everyone's cuddily uncle, even inviting McGuinness to come over and discuss Cricket's role in eternal damnation. 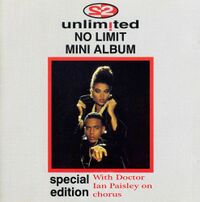 Ian Paisley went to the limits and beyond for bigotry.

Paisley also recorded a charity single for the UDA, a cover of YMCA by the Village People. The main lyric It's fun to fuck with the gay U-D-A became a popular slogan and replaced the Loyalist phrase Quis Separabit for a short period.

January 2010 saw the re-release of Mr Paisley's other long forgotten hit, "Mrs Robinson". Ian was once famously credited for writing this 70's classic in the downstairs bog of Peter Robinson's LA home. When asked by Rolling Stone Magazine as to what the inspiration was behind the world number 1 smash hit, Ian merely replied "NOOOOOOOO comment"

Ian Paisley famously believes that sodomy is a terrible sin and one whose practitioners have detailed plans to destroy Ulster from within. According to Dr Paisley's bestselling (in Northern Ireland, well, parts of Belfast anyway) hardback book The Sodomite Threat to God's Ulster they will achieve this by greasing-up each others cocks and anuses and "doing what comes unnaturally!" thus bringing down God's wrath and causing Ulster to be wiped off the face of the Earth "just like Sodom and Gomorrah!". This lead to Paisley's forming a political movement - Save Ulster From Sodomy - in order to combat this threat. So far its main broadsides have been Paisley shouting in the street and someone punching Peter Mandelson.

“Goldfinger is an outrage. No.”

During the hight of his reign, Paisley was known as Dr. 'Ulster Says' No. At this time his overexcessive use of the word 'No' had allowed him to master the word, making him the only man in the entire of Northern Ireland allowed to say it. This meant that everyone else were his slaves, constantly having to answer 'Yes' to all of his demands.

In 2005 after the death of the late Pope Sean Paul II, Paisley was put forward as the surprise candidate for the papacy. On his decision to stand in conclave Paisley said "Can I wear the nice white dress and use the cool Jesus Stick". This remark discouraged his supporters who finally realised that Paisley was going gaga

Ian Paisley made a late conversion to Catholicism as he wanted to 'keep arguing in hell'. 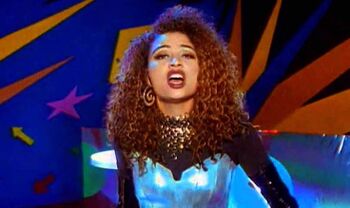 “These quotes are an outrage.”

~ Ian Paisley on His own words