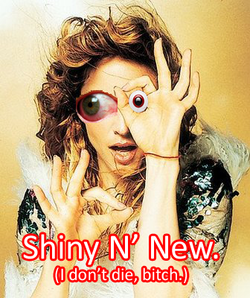 The singer's immortality has terrified even the strongest of political leaders.

Madonna Louise Ciccone is a mysterious, immortal, almighty, demon-like, muscle-bound yet still sexy creature that is believed by some to be the reason why God hates humanity. While nobody knows the true name or nature of this being, she was christened Madonna at birth but we can assure you that this lady is almost certainly not a virgin. Perhaps more commonly known as the 'Queen of Pop,' mostly due to the fact she has outlived all other contenders. Some say she has been around since the dawn of man, just by drinking the sweat of cats (see: immortality). 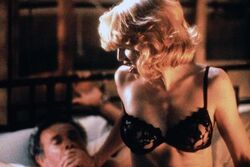 A body of evidence.

After much success in the music industry, Madonna still needed more fame and a more diverse career. And the film industry was the perfect vehicle. After a highly successful debut in the movie Desperately Seeking Susan, where she played the Seattle-based title whore, she began the candid, behind-the-scenes documentary Having Sex With Madonna, a movie that convinced everyone to buy it by pretending to be pornography you could buy without buying pornography.

Madonna quickly took the role in the 1993 megahit movie Body of Evidence, where again, viewers almost got to see her having sex. 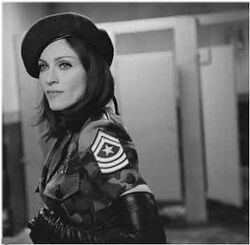 On December 22, 2000, Madonna married Guy Ritchie in a giant replica of her uterus. It didn't take long for Guy to knock up his new spouse and the baby was named Rocco. Rocco's birth was shrouded in controversy as Madonna was having her vagina surgically repaired at the time, and he had to be born anally. After the success (or failure, it varies from person to person) of Stale Candy, Guy Ritchie couldn't take being married to a whore and divorced her. Madonna got so angry that she kicked him so hard, he flew to Lebanon. Feeling a bit sad, she wrote a song called Miles Away, which is about Guy being very far away from her. Madonna realized that she already made that song, so she "revised" it and released it as Niles, Away!, which is about the butler from The Nanny. In a later interview, Guy said that he couldn't find a vacuum cleaner that sucked more than Madonna's songs, so he married the second best thing. He also said that "sleeping with Madonna was like sleeping with a lump of sinewy meat" as a direct comparison to Madonna's extremely toned body. Lastly, Guy laments that Madonna got custody of Oprah, who is now learning the ways of Kabbalah.

Madonna stunned the world when she accidentally adopted the entire male population of Liberia. With all of these kids, Madonna thought of what to do. An idea struck her, and she put them inside giant maracas, and started shaking them. She soon regretted this, so she made up a fictional country, Malawi. When Malawi denied her the right to adopt children there, she became angry and recorded the sound of children screaming while being shaken inside a giant maraca. The noise became Madonna's next album, "Me Against the Catholicism". It's not considered one of her better albums.

A Madonna, the name inspired by her dentition.

With her long-spanning music career, she effectively flourished in her art, which consisted of songs about sex, women, she-men, and compelling teenagers to dress like her without consideration of their level of attractiveness, weight, and gender. Her "art" also encourages everyone to sleep with as many creatures and inanimate things as they can, while teaching them how to pretend to like rough sex and have thousands of orgasms. She most effectively shared her teachings by authoring a book, that won six Gaddafi Freedom Prizes, four Reebok Human Rights awards and nine Blockbuster Awards.

Unlike many artists Madonna is able to sing simultaneously via her vagina, anus, and mouth, all three of which can be mic'd during performances. It is a little known fact that many of the "background" vocals on her earlier albums were actually emanating from her non-oral orifices, both of which have vocal characteristics quite different from her main singing voice. Many higher pitched vocals such as those on Like a Virgin came from her anus, while more soulful vocals such as the background singing on Borderline were the typical sound of her vagina. Madonna gradually stopped using her anus for backup vocals as it had become over-dilated and could no longer hit the higher registers. However, she does still use various farting techniques in some of her later works, and even used it to emulate a stage light during one performance of Ray of Light.

Madonna is currently going through what us humans refer to as a 'midlife crisis' at the age of 67. This will excrete itself through another 2 or 3 albums worth of trite drivel, after which Madonna will become a painter, re-create Francis Bacon's studio, and present the Antiques roadshow from it. In a recent interview in Finland, she mentioned the possibility of a duo with Chris Martin from Coldplay. On hearing this the cameraman doused himself in petrol and set himself alight.

As seen in her albums, Madonna not just deals with banal and tired topics like sex and parties. But also deals with important and profound topics like her vagina love, society, religion, sex diversity, politics, economy and the strange fashion trends imposed by herself.