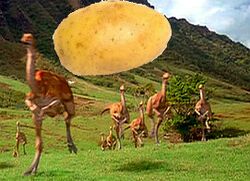 A herd of parasaurolophus flee from an attacking potato.

The potato (Tuberosum rex, often abbreviated to T. rex) was a large, aggressive prehistoric species of tuber that dominated much of the supercontinent Pangaea during the Mesozoic Era. Their unique method of combat allowed them to take down virtually any other creature, allowing them to quickly rise to the top of the food chain. At the peak of their evolutionary calendar, potatoes could grow to be 40 meters (130 feet) in length, 17 meters (55 feet) in height, and 15 meters (49 feet) in breadth. Since then, however, potatoes have devolved to about the size of a human fist, and are frequently grown and eaten in many cultures as a staple food. 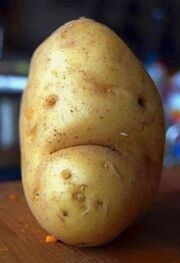 The potato first came into being in the lower Triassic period. The earliest potatoes spent most, if not all, of their lives underground, gathering water and nutrients from the soil. However, the soil eventually began to acidify and soon became a hostile habitat, forcing the tubers to move above ground. At first, their limited mobility made them easy targets for many predators. Soon, however, the potatoes developed a very unique method of self-propulsion: by moving the fluids within their flesh, they could shift their centers of gravity and roll at will. This technique allowed them both the ability to move freely and to evade capture by predators. As potatoes grew in size, speed and dexterity, they realized that they could also use this technique against prey, by barreling towards it with enough speed to kill on impact. Eventually, the potatoes became so large that they did not need to attack as quickly, because even if the initial impact was not large enough to cause immediate death, the prey would inevitably be crushed by the potatoes' enormous weight. However, not possessing mouths, the potatoes had to feed off of their prey's moans of pain, and not the flesh.

For those without comedic tastes, the so-called experts at Wikipedia have an article about Potato.

When potatoes were first set upon by the dinosaurs, their considerable strength deterred the potatoes' attacks. However, the potatoes soon learned to dodge and counter dinosaur attacks before the potential predators could react. Before long, the potatoes were practically invincible beasts who could take on even the most tough of foes. For most of the Cretaceous period, nearly all land species were at the mercy of these giant rolling creatures. 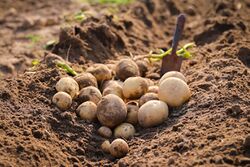 Potatoes about to move out and migrate

The potatoes generally stayed near sea level, because they could not generate the kinetic energy necessary to climb mountains. This meant that they never went very far inland, instead opting to remain near the sea. This was advantageous to the tubers, because the mild weather conditions coupled with their resistance to predators gave them a comparatively long lifespan. Though they would often stay in the same place for many generations, occasionally they would make long migrations to other parts of the world. The potatoes were similar to wolves, in that some lived alone and others lived in packs ranging from as few as five to as many as forty potatoes. Though these packs moved less than lone potatoes did, they were far more effective at hunting and defense than loners, because the combined force generated while they moved caused earthquake-like tremors that disoriented large targets or predators. Based on places in which fossils of potatoes have been found, it has been generally agreed that the potatoes visited every coastal area of Pangaea excepting the godforsaken hellhole that is now Australia, leading paleontologists to believe that potatoes had the ability to make decisions based on common sense, as well as a certain quantity of intelligence.

The baked status of the Uncyclopedia "puzzle potato" logo alludes to the doctrine that even the great must eventually see their downfall.

Roughly 66 million years ago, at the end of the Cretaceous Period, an enormous meteor impacted the Earth, creating a dust cloud that blocked out the sun for up to a year and causing the mass extinction commonly called the K-Pg. The dust cloud cause a greenhouse effect that made conditions so hot for the potatoes that nearly every potato on Earth perished, leading to the first baked potatoes. However, the meteor became convinced that it hadn’t done its job well enough, and collided with Earth a second time, leading to the first twice-baked potatoes. Since then, baked potatoes have become the universal symbol of downfall and defeat, and are popular among college students in the western world as backup snacks for after-finals parties in which one's grades are not known.

After the meteor struck the Earth, only the few potatoes who managed to burrow back to their original home – underground – were able to survive the terrible heat. Because of the absence of potential prey, the potatoes quickly became malnourished and shrunk to the size of a human fist. They were eventually discovered by humans, who quickly discovered their deliciousness and began to cultivate them. However, they are far from docile. When bunched together, these tiny creatures become infinitely powerful, cause the deaths of over four thousand potato farmers every year, thus contributing to the immortal image of a ghostly quiet potato farm, all of whose tubers have sprung from the ground and rolled away, leaving only the mangled remnants of the poor soul audacious enough to attempt to be their master, and a single, haunting phrase running through one's mind:

"The potatoes got him."