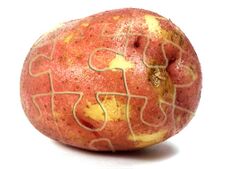 The potato is the symbol of Uncyclopedia. It signifies mental softness and dead Irishmen.

“Self referential humour makes me sick to the core.”

The poor, meme-ridden "comedy" website Uncyclopedia is the stuff of Internet legend and infamy. The site, which is thought to have originated in 1860 as an American imperialist tool for global domination, is now a multi-national effort and is seen as the best of its kind by some.[1] It currently specializes in tedious mockery of perceived competitors and petty in-fighting, with much of the content seen as mass-produced junk. Yet, there remains a peculiar fondness for some of the articles by fanatics.

The site has, however, been perceived as a waste of server space by its host, the evil Wikia Empire. This is a view that has sparked a substantial shift from the site's satirical aspirations, causing it to instead redirect its resources into pathetic racial slurs and endless references to Nazis. This is compounded by the need for articles that appease a "softer consensus". 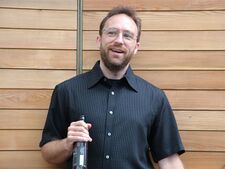 Jimbo Wales, friendly but aloof during his 2005 meeting with Uncyclopedians, trying to extricate himself without hurting anyone's feelings. He later commented that the Uncyclopedia delegation were a "bunch of weirdos".

The site was founded by billionaire entrepreneur and media tycoon Oscar Wilde sometime in the late nineteenth century. The early Uncyclopedia was not the impressive effort it is today. It all began when Wilde would often write puerile childish jokes on scraps of paper to his male friends to encourage more "intimate relations". The Internet was, conveniently, popularized in the 1990s and allowed Wilde to pursue the same method through technology, and thus he was able to extend his efforts globally.

Wilde's efforts were spotted by Sophia Lauren[2] whilst on vacation. After hours of debate, they decided to found an Internet site that would allow for Oscar's whoring and Sophia's showcasing of talent to take place in one convenient location. Thus, in 2005, a crummy website was born and a whole new reason to live for the unemployed was broadcast to the world.

Those so-called experts at Wikipedia have an article about US. Talk about audacious!

Bond villain stock type Jimbo Wales bought the site from Wilde in 2005. This was done off the back of economic difficulties and bad press over Wilde's "libertine lifestyle". Wales's motivations for the purchase are not known, as he later commented that he personally disliked the fact he owned such a "low echelon" of the Internet.[3]

In 2006, Wales and his Wikia firm relinquished to a 20% stake in the site and allowed Wilde to be reinstated as CEO in the latter quarter of the year. Wilde was anxious for a new investor, as he found the site a "hassle", and Uncyclopedia was sold by him to News Corp for all the money in his wallet, change from a nearby vending machine, and some pocket lint, totaling $12.50. He was kept as acting CEO for publicity purposes despite managerial decisions being shifted to Wikia and News Corp stooges.

Wilde had often commented that Uncyclopedia was never "really there" but that it "just pretended" as it was on computer screens. Experts agree that this ignorance of information technology and Web 2.0 forced Wilde to sell his baby to News Corp. The conglomerate had no problem with the lack of quality or worthwhile content, as is apparent in the quality of the articles now featured. Since then, there has been an ever greater emphasis on the "sizzle" rather than the "sausage" of which Wilde was always so fond of. 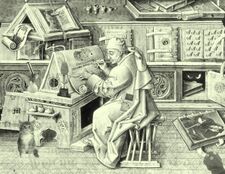 The first ideas for Uncyclopedia were laid down by Chronarion in 2001. Like all geniuses, the credit for his achievement has been stolen by a tedious meme, vis-à-vis Oscar Wilde.

Initially, the site was a parody of renowned-to-comedy encyclopedia Wikipedia. However, due to economic and mental constraints, the site now relies and insists on trusty in-jokes and moronic junk. This was instituted by Wikia, who have sought to compete with rival comedy sites such as shock humor website Encyclopedia Dramatica and advertising-rich yank dumpster The Onion. Of course, no site is really comparable to Uncyclopedia, as it occupies a very unique space on the outer rim of the internet.

For the founders of the site, the aim was to provide Oscar Wilde nubile and healthy young men with nothing better to do than make up quotes and write articles based on the courses they were studying whilst at University.[4] This has still proved to be the case, though the site has pursued younger contributors to spark more interest and competition. The result has been an annoying amount of "intellgentsia"[5] who readily have an English textbook from school to correct contributors.

The site's initial aims included writing articles with an intelligent, satirical, and funny intent. As time went on and numbers increased, a greater need for recognition and competition amongst the users was demanded. This led to the VFH page, which allowed articles to be showcased to the rest of the community on the front page. Furthermore, due to the high amount of drama and bitching on discussion pages, a community forum was invented to allow whining and drama to proceed more smoothly.

In 2008, a decree proposed new policies: the nomination and voting for an article's deletion on VFD, the uploading of terrible and/or perverted images, the creation of useless categories and pointlessly categorizing images, and the egregious level of more useless and unfunny templates and quotes that are to be spammed onto articles. 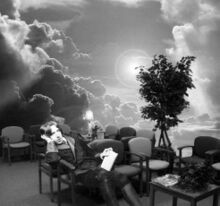 The site was, for a time, famous for its clever articles, but the tedious dramas are also often cited as being a source of amusements for the users and admins. The bitter in-fighting has also been used to allay many a high school/university shooting as lonely young men flock to "compete" on humor, particularly the kind of humor they have found girls unresponsive to.

Oscar Wilde instituted a hierarchical administration in the early days of Uncyclopedia to run the site without his supervision. This evil sect would allow for bickering about the site's direction to take place in a clean and less soiled environment than the rest of the site. Entry to the so-called "Cabal" for users usually depends on how vocal the current active members are and whether the more moderate voices can stand the drama of yet more "queens" coming to the fore. The Cabal system is widely criticized even by members themselves; an anonymous source has commented, "Once you're wedged into the Cabal, the only real way out is farther up it."[6]

The site also has a religious structure based on Judeo-Christian beliefs, though many atavistic pagan elements have been introduced for disciplining the less intelligent. Good examples of these include Sophia, Pastafarianism, Chuck Norris, and Russian Reversals, which engender loyalty despite whining and in-fighting. The official Church of Uncyclopedia was dissolved alongside many of the classic memes when Wilde began his sabbatical in 2008.

The gradual dissolution of on-site memes and nihilistic sentiment towards differing notions of humor was apparently due to the Uncyclopedians pulling yet another stunt to boost the profile of the site. The toothless simpletons from Wilde's home sty of Dublin and elsewhere around the world strongly deny this. Since then, Uncyclopedia has become more secular.[7]

Uncyclopedia looks forward to an era of fire-fueled creativity.

The site is something of a Paradise Lost and it is hoped that it can be restored to the glorious whoring effort that Wilde envisioned while pissed out of his mind during his studies at Oxford. The site has expanded a great deal, with an excess of 36,875 articles taking up server space. Some have speculated that lax attitudes have opened Uncyclopedia's future wide open to the infection of vandals.

It has been the case that the site will continue to function on more "experimental" articles involving MS Paint, sex, and/or racism jokes. Zombie Jesus famously commented in 2007 about Uncyclopedians, "How these 'special people' find the on button on their computers, let alone edit the site, baffles me."

Another aspect new users can partake in is "power hunger." For the comedy wiki, this remains one of the slightly more amusing things for a spectator of the site. It can often be hilarious to hear the IRC discussions, or the forums where those skilled in debate keenly hope to persuade the existing community that one day they will "seize control" of the impoverished site and restore order.[8]

In 2013, a schism of Uncyclopedia users, dissatisfied with the site's many compromises taken under Wikia's ownership, crossed the Undying Sea to look for the Undying lands and formed their own separate .co Uncyclopedia (termed "the fork"). Those who remained on the main site (or "the spoon") then went off on their separate journey, being flung out of Wikia in 2019 and moving across .ca then finally .com domains. Wilde was reportedly elated by the change in power, saying "Our Uncyclopedia has defanged itself from the jaws of the Wikia beast."