You may be looking for Nazi Party and not even know it!

The Shuriken, symbol of the Order

For those without comedic tastes, the so-called experts at Wikipedia have an article about Nazi.

“Did you hear something?”

The Order of the Nazi was an order of chivalry (similar to the Order of the British Empire or the Order of Uncyclopedia) that was known for its ruthless and selective initiation processes. They were known to be relaxed toward members of the Aryan race, whereas for other denominations it was next to impossible to be admitted. They were dissolved after the Trials of Nuremburg, a particularly difficult challenge imposed by the world, who had become jealous of their ultra-chic exclusivity.

They were obsessed with innefective and costly methods of dispatching their enemies, like for example transporting (enemies had it for free, well, not like the travel industry) enemies in a happy camp (which You can infer from very few people complaining about it), where they baked cookies all the time (they had huge bills for gas), with sadistic guards (they were not well paid and saw no satisfaction with the job). Enemies were punished - refusing enemies to eat any cookie they made themselves, at least according to Nazis. Enemies were locked here until they died of natural cause - sad and bored to death they stuffed their heads into gas oven (yes, they did not even realize electricity was cheaper).

After Nazis were defeated the horrible amount of documentary movies were made about them. They were full of propaganda against Nazis. The amount of propaganda in these movies heavily outweights all the Nazi propaganda so much, that it renders it quite nonexistant.

In World War I, Adolf Hitler was wounded. As he waited in the hospital, drifting in and out of consciousness, he claimed he saw a vision. He said "Good care should be taken not to deny things that are true." And indeed, he believed the necessity of such a party as this order to be real and true. As such, he chose not to deny it, and as soon as the final bullet of the Great War was shot, he emerged with his new ideology. He outlined this ideology in a groundbreaking book known as Mein Kampf which, when translated to English, means roughly My Incessantly Annoying Pontification. In this book, Hitler painted a picture of a disorganized world where the "bourgeoisie" oppress the "proletariat" in a brutal fashion. 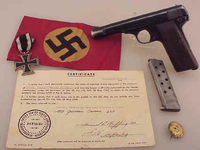 Though this in itself would be enough to warrant a lawsuit from Karl Marx (author of New York Times Bestseller The Communist Manifesto), Hitler departs from this train of thought for a good bit of the first half of the second volume, which is composed primarily of accusatory ramblings that end up reading as nothing more than the complaints of a petulant child. After this sidetrack, he concludes the book promising that he'll fix Germany, best summed up in this quote directly from the book.

In public readings of the book, at this point Hitler would rip off his obviously fake mustache and Nazi uniform, revealing the gang colors of the Cripz, and get on the table and begin to gangsta rap. Though his favorite topic was "screwing dem hos" (ho being a German colloquialism for "Jew, Homosexual, Gypsy, or any other form of deviant in the eyes of dein Führer Hitler"), he would occasionally delve into such deeper topics as "der final soluzion bitches" (Final Solution = German MMORPG)

The word Nazi is actually an acronym for National Socialist German Workers' Party, which, when converted to an acronym in the German language, becomes National Asocialist Zgerman Iworkers *space*Party, which inspired the Apple software package iWork.

This one was definitely a Chancellor.

In order of decreasing importance, the Order of the Nazi looked something like this:

"Führer" was a rank meaning "leader," and was thus only occupied by Adolf Hitler for the duration of the Order's existence. "Chancellor," was a sub-leader, a sort of "wannabe" that wasn't Hitler but wished to hell he was. This was occupied by such well-known Nazis as Hans Zimmer, Joseph Goebbels, and Hermann Goering. "Minister" was anyone else in the Order that was of governmental importance. Aryan was the lowest rank, occupied by any German, who was at birth automatically inducted into the Order. "Prole" is a rank stolen from 1984 that was given to any non-German who wished to join.

The Order of the Nazi was, as previously mentioned, a ruthless quasi-cult, an extremely far-reaching fraternity, if you will. Provisions for the admission of Aryans (the founders of this brotherhood) were, as such, rather nonexistent, and indeed sometimes criticized by existing members. Usually, these people were killed, as the Nazis had no problem with violence. In the same vein, the admission policy for anyone else who wanted to join was similarly ruthless, as detailed in the following sections.

Early Years of the Order 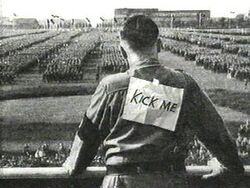 Hitler's Napoleon complex was based on the fact that he never could get along well with others.

In the early years, membership in the Order of the Nazi was a highly coveted position among many, particularly the leaders of groups opposed to Hitler's political ideologies. However, as a general rule, Hitler did not allow such men into the Order. As such, he created a rigorous testing program to ensure that those wishing to join were physically and mentally fit for admission.

The process boiled down to the mantra "Work will make you free," a philosophy carried by Hitler until the end. Under this creed, potential members were imprisoned in forced labor camps indefinitely, being let free when Hitler determined it was right to do so. This rarely, if ever, happened, and as such by the beginning of World War II not many of these people wished to join anymore.

Later Years of the Order

Hitler soon grew weary of such a homogeneous group, and thus proposed his "Final Solution" to this problem. He would admit every Jew, homosexual, gypsy, et al into the screening process, to gain more inductees. The process was similar to that of the early years; however, many people were admitted into a super-secret new rank of the order, Covert. This rank was where most proles went after induction (approximately 6 million, in fact), and were never heard from again. No one knows where they went, though most believe that they were used as secret agents in plans plotted by the Germans. Others say that they became janitors in Brick-Oven Pizza Palaces. No one knows for sure. Wherever these people went, some people never made it past "prole," toiling in the forced-labor camps until the fall of the Reich (German for "Order of the Nazi, Reign of Adolf Hitler, aided by his people in a time of perpetual war") 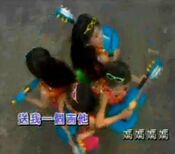 The Order wasn't all bad. For members, it was a fun-filled adventure. In the Order, the Nazis participated in such activities as:

The Nazi where also famous for their mad science super science, Hitler soon realized that the Jews where not liking the cookies they made themselves and pondered a many days, soon he discovered the concept of Übermensch (pronounced oo-ber-munch) hailed as the ultimate goal of humanity by the philosopher Friedrich Nietzsche, to create the worlds greatest cookie. However in his plans to round up the best bakers he could get, the realization soon took over that to create a large cookie one requires large hands. Thus the idea for a Super Soldat (not to be confused with the American attempt at it later on, Super Soldier) was created and begun rounding up the greatest German scientists. However he realized that for this idea to come into fruition he would need complete secrecy so he used old Russian technology of the once useless technology of space travel, to fly to the moon and begin construction on a Top Secret Nazi Moon Bases. He even got work on a Nazi Hover Tank (which was never completed) for the original purpose of firing large amount of dough at big targets while moving across bumpy terrain. 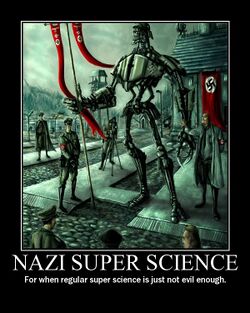 The best Nazi scientists tried to create super soldiers to keep the peace, they where designed to use their large hands to create the best cookies and spank anyone who tried to steal them (The Motivator was the original model).

The Order and WWII

The Nazis were credited with the invention of the holiday camp in 1936. Each camp had a group of entertainment staff called "Black Shirts" to provide fun and frolics for all the happy campers.

As was previously stated, the entire government of Germany joined the Order of the Nazi, and subsequently joined the war. These are two events completely separate of each other, but most do not know this, and therefore blame Nazis for unsanctioned invasion of Poland, thus igniting what is considered by many to be the worst international conflict in history. No, that was the fault of the government, but the Nazi name was slandered by jealous bureaucrats who were, well, jealous. In the culmination of the European Theater of the war, therefore, the Trials of Nuremberg were mounted to dissolve the Nazis forever.

For most members, the Order was life. Ergo, most either committed suicide or let themselves die in the trials rather than go on sans the Nazi name. For many, this was considered a great triumph, not only for petty jealousy and justifying libel, but also because the deaths of these government officials marked the end of a murderous regime. This may well be true. Many Aryans did die under the regime of those who were also Nazis. But misunderstanding played a big role in this as well. In fact, so many who now know the truth are outraged, and shave their heads in memoriam of the fallen Nazis. More power to them, for theirs is a truly noble fight. To this day, it remains illegal in parts of Europe to display the symbols of the nazi party, however not so in America, where world war two was seen more as a chance to target practice and less of a global horror.