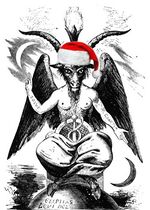 Students of Satanism sometimes misspell it Santaism. But Satan will not be mocked.

Satanism was invented when some loser got beaten up and locked in his locker by a bunch of jocks, similar to the way Wicca was created. It's followers are a bunch of retards who think it's Hallowe'en everyday, attracting several hundred people, most of them morbidly obese who dress like Count Dracula everyday, and act hurt and persecuted when people treat them like the misanthropic retards they are.

The main principles of Satanism are as follows:

And of course, the most important one of all...

And of course, only a Satanist would rag on Hippies, who haven't existed since the 1960's. This is an important lesson of Satanism: Always attack the weak and defenseless! This is why Satanists sacrifice cats and chickens, rather than something that could fight back, like a Grizzly Bear in heat.

Nerds who make "The Comic Book Guy" on the Simpsons seem like Brad Pitt constantly point out LaVey looks like Ming The Merciless.

Satan decided he would launch his super duper un-religion in 1966 in San Francisco, California of all places. He searched the earth relentlessly and upon finding the wisest man, commanded him to write The Satanic Bible. But the man answered, "No fucking way!" So, Satan found the second wisest man, who said the same thing. And he asked the next, and so on and so forth, and when there was no one else, he asked Howie Levey, who agreed since he was a psudeo-intellectual loser with too much time on his hands. The Devil changed Howie's name to Anton LaVey, so he wouldn't sound like such a nerd. Satan later found out LaVey was a wife beating pimp and scumbag, so he tried to renig out of the deal, but it was too late. Now idiots married to their own cousins in trailer parks have a religon they could call their own!

This is how Wicca was created.

Types Of Satanism Satanism is not for everyone. First, you have to think you're better than everybody...even though you're an emo idiot who's into cutting. Two, you have to practice things that expand your mind and bring you closer to the darkside...like huffing airplane glue.

Once you meet this criteria, you can choose which Satanism is right for you.

Becoming A HITLER YOUTH The first steps in becoming a HITLER YOUTH are to be an anti-social misfit loser, dress in black, and lose your mind (not necessarily in that order). Being a pariah is absolutely necessary. If you crave negative attention and keep your dead grandma's brain in a Mason jar under your pillow, you're more than halfway there!

Satanic Magic Next comes the best part of the whole Satanic gig: Satanic magic! Or, rather, "Magick." It's so super secret that it has to be spelled wrong, and can only be obtained by people who have $8 to spend at Books-A-Million. The 3 spells in it include revnege (now you can get back at that guy that tripped you in lunch line in the 8th grade!), lust (but it won't work and you'll just spend your nights jacking off to internet amputee porn as usual) and a spell to get stuff through Satan's compassion (lol! Good luck on that last one!) It claims to be a book on philosophy and psychology, but it's really just a bunch of horseshit, as all occult stuff is. A new expanded edition of the Satanic Bible is slated for release in 2011 with rituals for popular pursuits of the Alien Elite including, but not limited to: "Scorin' Weed," "Gettin a Higher Score on Warcraft," "Making Mom Stop Raggin' on Me," and "Scorin' Meth."

If your spells don't work, and your math teacher doesn't die for giving you an F that you deserved anyway because you're a 'tard, don't panic and do something stupid, like forgetting about the whole damn occult thing altogether! You probably just didn't believe hard enough. And consider this: should the pathetic reality of your existence set in at any time, the effects can be quickly nullified by huffing glue.

Every June 7, the Satanists celebrate Anti-Christmas, which marks the birth of the Antichrist a.k.a. TV's Andy Griffith. On the preceding night, Satanist children anticipate presents from the Anti-Claus, who lives in Mexico. The adults don't exchange presents with one another. They eat lots of fruitcakes, which is one reason the Church of Satan is based in San Francisco. Also, the kids all receive toys which the parents promptly smash right in front of them and then burn with cigarettes, and it's yet another memory they have to repress. If you believe in Satanism your are the coolest guy in the world. AND you get to kill Jews.

Satan released his masterpiece at an unspecified time, though the book was copyrighted by Anton "smack dat ho" LaVey in 1969 (under command of the evil Satan and the even more evil Avon Books). LaVey was a high school dropout, a carnival hustler, and a reported all-around loser.

He obviously knew the secrets of how to be a success in life: he was a wife beating pimp, a self-admitted host of a "cannibal feast", and he lived on food stamps a good portion of his life before dying bankrupt. The Satanic Bible is a prime example of this magnificent religion, which is practiced by geeks who live in their parent's basements and post on online forums 19 hours a day. If you want a copy, just ask the 350 lbs. white supremacist in the jail cell next to you if you can borrow his...although he may expect "certain favors" in return if you know what I mean, so be carful!