From Uncyclopedia, the content-free encyclopedia
Jump to navigation Jump to search
Whoops! Maybe you were looking for him? Here, try these binoculars.

Life. One minute you're in a healthy, committed relationship with the woman you love[1]. The next, she tears out your heart, shreds it into confetti-sized strips and uses your tattered, confetti heart to merrily celebrate walking away from you. We've all been there. Maybe it really irked her when you named your balls Larry and Curly and told her she should Moe her bush. Perhaps she wasn't as thrilled as you were with your ability to scream in your sleep. Maybe you should have been more careful unpacking your adjectives when she asked your opinion of her new jeans. She knows what corpulent means, you ass. Porcine was clearly the better option.

Whatever the case may be, here you are. Alone. Again... NO! Not this time. You will win her back. With laughter. And persistence. And eleven like-minded individuals.

It's time to Clown Stalk. What, you're not familiar? Here, smell my boutonniere...

Sorry About That Boutonniere Thing

Aww, I didn't mean to get your face so wet. But that was abject lesson #1: Don't go the normal, stalkery route and stand outside her apartment in the rain making sad faces. Who are you, John Cusack? No my friend, you have found something special — a woman who you know will sleep with you and doesn't get offended, or ask too many questions, when you cry afterward. A woman who allows you to watch from the closet as she talks to her girlfriends on the phone. A woman who doesn't even mind that you stretch out her negligees with your impromptu fashion shows while she is at work.

Okay, she didn't know about those last two, but it's not like she ever specifically said not to do them, right? She's a keeper, so latch on like the lunatic you are and refuse to let her go. This could get creepy.

That's where the clown costume comes in.

In modern society it sure is tough to find someone to develop soap bubble film. Either upgrade to digital or try a laundromat.

What's the matter? That's some intense head scratching, my friend. Are you confused, or is it dandruff? I know — a bad case of the head scabbies. No wonder she left you. You're infested! Hahaha hee hee HAAAAA! Huh haw! Hee? Ha. No? Well, I gotcha again, anyway. The itching powder I put in my hat brim before I handed it over is a part of abject lesson #2: Don't touch my fucking hat.

Moving on, it's time to assemble your costume. You'll need:

A clown wig is cheap. A can of spray paint is cheaper. You aren't signing on with The Ringling Brothers, here. Pick your color and spray away. Just make sure to wait three to six hours for the paint to dry before you commence stalking. Nobody likes a sloppy clown stalker.

Lucky for you, all the makeup you could ever need can be found right in your bathroom. Your special lady couldn't possibly have carried all of her belongings with her when she walked out the door that night. Remember? She was in quite a rush to leave when you told her that you had formed a collection of all her nail clippings from the past nine months. You even showed her the frilly scrapbook you house them in. The photograph on the cover was of her. On the toilet. She may not have seen that for the delicate beacon of your devotion that it was, but even this was for the best. Because who's got all the makeup and toenail clippings?

Unless you are willing to throw down top dollar at a high-end shop, like Pips & Doonglefluff's Polka-Dotted Pants Emporium, your outfit could be the biggest hurdle to overcome. Ever tried jumping hurdles in clown shoes? No, you best just borrow one of your mother's pantsuits and your father's neckties. Boom! Clown outfit![2]

Now all you need is... do not try to touch my hat! Go rob a hobo or something.

Assemble a Band of Merry Stalkers 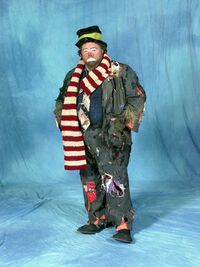 With your outfit out of the way, its time to gather your outfit.[3][4] While solitary stalking may be acceptable for those casual weekend creepers, clown stalking is performed in packs, or Lookie-Loo troupes, as they are known amongst the initiated. Lookie-Loo troupes typically consist of twelve clowns total:

Blending In With Your Environment

Clown stalkers are unable to access the usual hiding places that a normal, run-of-the-mill stalker uses. Bushes and trees, staples of the stalker community, are right out, you brightly-colored buffoon. Are you trying to get caught? No? Then start getting creative. Invade her neighbor's children's birthday parties. Start up your own circus and pitch your big top right on her front yard. Anytime a parade passes her house, twirl that invisible baton with one hand and watch her through the crowd with a novelty periscope in the other.

In the event that you are unable to find any parades, circuses or children's birthday parties, go for Plan B: Hide in the bushes outside of her workplace. 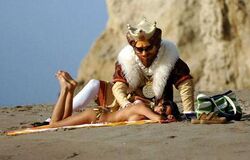 To really hone your craft, we recommend stalking this clown while he is clown stalking. Take notes. He is a professional. He may also give you a burger.

Of course you got caught. You were dressed as a maniacal, paint-stained clown. Alone. Hiding in the bushes. Outside of the police department, where your special lady works as a 9-11 dispatcher.

That's abject lesson #3: I told you not to touch my fucking hat.