From Uncyclopedia, the content-free encyclopedia
(Redirected from Kleptomania)
Jump to navigation Jump to search

Danger
Elephants are watching you! Remember to pick your friends' pockets!

For those without comedic tastes, the "questionable parody" of this website called Wikipedia have an article about Kleptomaniac.

“Give me back my pen, you rotten fool!”

“And Oscar Wilde died in a ditch, alone.”

A kleptomaniac is someone who enjoys relieving people of items that they may otherwise find of some value or use. A "klepto" as they are affectionately known, believes it is their sworn duty, as agreed to in the Kleptomaniac's Hypocritic Oath, to remove these items from members of the public as a means of easing their burden.

Contemporary People Who Are or May Be Kleptomaniacs[edit]

I swear by Robin Hood, Little John and Friar Tuck and Much the Miller's Son, and I take to witness all the Merry Men, to keep according to my ability and my judgment, the following Oath (and anything that I find, even if it is in someone else's pocket at the time).

To consider dear to me as my parents him who taught me this art; to live in common with him and if necessary to take his goods from him; To look upon his children as my own, to teach them this art and to bring bankruptcy upon those that I encounter; to impart to my sons and the sons of the master who taught me and the disciples who have enrolled themselves and have agreed to the rules of the profession, but to these alone the wonders of kleptomaniacy.

I will preserve the purity of my life and my art.

All that may come to my knowledge and possession, which ought not to be spread abroad, I will keep secret and will never reveal.

If I keep this oath faithfully, may I enjoy my life and practice my art, respected by no man, in any time; but if I swerve from it or violate it, may they call me noble. 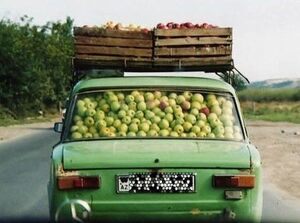 The driver of this automobile is not a kleptomaniac. On the contrary: His house is often raided by kleptomaniacs, and he's not sure what they'll start taking if he ever runs out of apples.

Pickpockets or as they like to be called, Fingersmiths, are a common form of kleptomaniac. Their hands can always be found in a pocket or two. It is actually more suspicious if their hand is in their own pocket. Especially if they are smiling. Creepy.

The annual Fingersmith Forum takes place in one of four major thieving cities of the world. One of the secrets of the trade is which cities these are. This yearly event is at risk of being cancelled due to the excess of staff needed to handle Lost & Found inquiries. Mostly just Lost inquiries really.

Some people are kleptomaniacs without knowing or wanting to be (why would you not?). The Random Striker breed of klepto may only experience any where from a few bouts if "stealitis" in their lifetime to semi regular occurrences. These episodes are usually triggered by something external like the jingle of keys, the sound of a coin hitting the ground, or a man dressed as a leprechaun whispering in your ear to "steal it, that's what Gandhi would have wanted".

This rare breed attempts to acquire that which is not theirs nor is tangible. Some things attempted to be acquired by these klepto Arts students over time have been the concept of freedom, equality, the cost of electricity, the Matrix and Al Gore. Santa Claus was successfully stolen in 1832, when as everyone knows, the Easter Bunny filled in for that Christmas. Don't worry, he was paid holiday rates.

How To Deal With Kleptomaniacs[edit]

All kleptomaniacs have specific weaknesses that you can exploit in order to defend yourself, your pockets and possessions. Here is a list of some methods you can employ:

What to do if you believe you have kleptomania[edit]

Steal things. Give these things to a charity shop. Steal them back again. Rinse and repeat (do not actually rinse the things unless they say that you should(or if you really want rinse them anyway and stick it to the man))