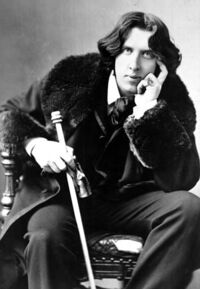 Wilde pictured in the 1898 advertising campaign for the world's first invisible mobile phone, the Teleny.

“Most of the time there's room for just one more on top...”
~ Oscar Wilde on Oscar Wilde Quotes

Playwright, novelist, musician, poet, philanthropist, historian and short story writer: these are just some of the professions of individuals that Oscar "Fingers O'Flaherty" Wilde has corrupted with his rampant sexuality and Rabelaisian appetites.

A man whose wisdom touches on nearly every conceivable topic, often without consent, which in turn has led to several lawsuits, renown'd for his beautiful diction and his skilled oratory, Oscar is without doubt one of the leading literary figures of the last few millennia.

Wilde was born on 16 October 1854 in Dublin, Ireland to an Anglo-Irish family. His father Sir Jack Wilde was an author and a scientist (his most famous contribution to the world was an early form of LSD), whilst his mother Gaynor made her name as an entertainer of little note.

Oscar excelled during his academic years, with a number of his tutors stating that he was always willing to lend a hand to the younger boys. After boarding school, he attended Maudlin College, Oxford, where he graduated with a double-first in Modern Classics and Flower Arranging. His classics tutor, Walter Patewr, remarked that Oscar had great natural ability but that "where others may fail, he would always go the extra distance and make a proper fist of it".

A Question of Sexuality 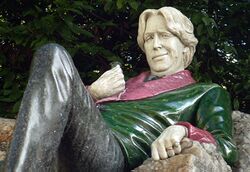 Oscar posed for sculptors many times during his life, though this remains the only statue that does not break any decency laws.

From 1890 to 1894, Oscar became a star in the long running BBC (Brixton Borough Council) show A Question of Sexuality. The show revolves around two teams of popular stars aiming to work out the sexual orientation of a number of guests. For his final year on the show, Oscar became one of the team captains, and it was during this time that he became famed for his polished wit.

For those without comedic tastes, the so-called experts at Wikipedia have an article very remotely related to Oscar Wilde.

Fellow contestants would often find themselves victims of Oscar's barbs, including the frequently cited set to with Prime Minister William Gladstone in a discussion over Prostitution. Gladstone's indignant "Well, I never!" was met by Oscar's "That's not what I heard, Grand Old Man." Gladstone would never again work with Oscar.

In 1895, Oscar moved on to perform his now infamous one man show at London's Wandsworth Theatre. The show, detailing his passion for the Pugilist's art, was a roaring success and saw an extended run in many of England's most famous establishments including the now-defunct Reading Palladium.

The show was brought to an end following a fatal incident after one of his shows. As Oscar was leaving the theatre, he was attacked by a man wielding an aubergine. Having partaken in several after show drinks, Wilde, famed for his rugged physique, reacted without thinking. Later that evening he was arrested, awaiting his court hearing.

The case lasted for four weeks, during which Oscar became a cause célèbre. In summary at the climax of the trial, Chief Justice Sir Alfred Wills made the following comment "Mister Wilde, I put it to you that you are not like other men. Your fists, sir, are lethal weapons." to which Oscar replied "That's me buggered, then." He would be sentenced to two years hard labour. 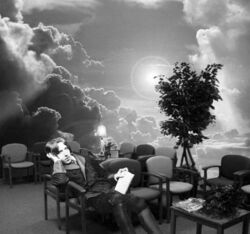 Oscar Wilde pictured in God's Waiting Room during his tour of the Colonies (circa. 1887). 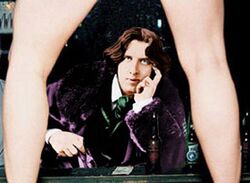 Nice legs, shame about the face.

Much has been made of Oscar's passion in "putting it about" whilst his sexual orientation has variously been classified as Bisexual, Homosexual, Humosexual, Metrosexual, Robofetishist and Cunning Linguist. Oscar himself described his sexuality as "opportunistic".

In 1884, Oscar married Constance Strumpet, daughter of Queen's Counsel Baron Strumpet, whose allowance allowed the Wildes to live in relative luxury with homes in London, Dublin and Paris. The couple produced two offspring in the following years, Oftime in 1885 and Girlsgon in 1886.

It is known from a variety of sources that Oscar had relationships with other men (particularly young men), numerous vegetables, a wolf and at least one item of oak bedroom furniture. Some of his conquests have become the stuff of legend, often making it difficult to differentiate between the truth and utter lies. As it is told by some folks, he used the phrase "From behind" quite often. 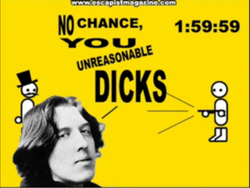 Oscar Wilde on the final boss fight of Manhunt.

Perhaps the most famous continuing expression of Oscar Wilde's iconic hold on modern popular culture is Uncyclopedia itself. As it begun to accommodate his work and to preserve the wisdom of man against the coming darkness, the site soon began to expand into the colourful, cosmopolitan shambles we see today. Oscar's ability to speak on any subject with complete fluidity has allowed him the undisputed title of King of Quotes and he remains perhaps the most popular contributor to the site.

However, this has not been without consequence. Amongst his more illustrious achievements, Oscar Wilde is also known as the "King of the People Who Get their Quotes Stolen." More so than any other man (save Anonymous), Oscar Wilde has his quotes stolen, misrepresented, and has hideous travesties attributed to him. So rampant is Oscar Wilde quote-misattribution, that even his own publication, Uncyclopedia, contains many quotes falsely attributed to the Great Author. To combat this, his children now authenticate all Oscar Wilde original quotes.

Wilde quote-misattribution is the national sport of England. Because of this, it is extraordinarily easy to find Oscar Wilde quotes (official and not), leading to greater confusion. Due to its status as the national sport, it is considered most polite among the middle classes of England to answer any telephonic inquiry relating to the desirability of a quote with the sentence "Ooh... yes, please, can I have a Wilde one?!"

The more progressive and risqué among Britain's social climbers may on occasion be tempted to ask for a quote by Winston Churchill or Noel Coward, although the old money still views this as irredeemably gauche.

“However, it's always good to have something beneath you as well.”