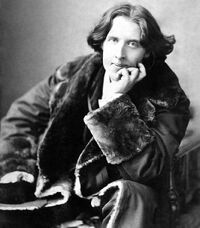 "Brevity is the soul of wit."

Oscar Wilde is perhaps the most prolific crafter of fake quotes who ever lived. Renowned worldwide as the Ambassador of Quotes, the Don of Quips, the King of Limericks, and the Premier Provider of Carpet Cleaning Services in the Southern New Jersey Area, Wilde was no stranger to witty remarks, although he was virtually unknown in most of South America. Although a cottage industry has sprung up in England around "Making up Oscar Wilde quotes," (despite the fact that he's Irish) here at Unquotable we screen our quotes for originality and freshness.

Oscar Wilde on the Art for Art's Sake Movement

Phrases and Philosophies for the Use of the Young

The Picture of Dorian Gray