“I was actually on fairly good terms with him, until that sub-par review I gave him in Variety. Talk about snippy.”

Quoting the Dread Cthulhu is a game invented by the Mad Arab Abbie "Dullard" Alhazred in the year 730 CE while writing his magnum opus, al Azif, later retitled the Necronomicon — and soon to be made available for the first time in paperback, with a foreword by Al Roker and a special Esperanto translation by Ayn Rand look-alike Leonard Peikoff.

In effect, the light-hearted, often silly game provided him and his family with some much-needed wholesome fun and tension relief during the long hours of recording the abhorrent mystical incantations used to summon a wide variety of ancient otherworldly demons such as Shrub Niggurath; the batlike Nyarlathotep, avatar of the blind idiot-god Azathoth; the infinite Yog-Sothoth; the fun-loving Mazelthoth; and the just-plain-old-boring Thoth. Not to mention the hideous Shoggoths, Visigoths, Nihilist Poseur Goths, Teenage Mutant Ninja Goths, Sylvia Tóths, frog-mutants, hamsters, cute puppies, and men in bunny suits mentioned in the terrifying Pnakotic Manuscripts and the Book of Eibon.

This is not to say that the game is without its challenges. Cthulhu's hideously obscene-sounding guttural dialect is nearly unpronounceable by human tongues, so misspellings often occur. Even the most famous saying about Cthulhu, "Ph'nglui mglw'nafh Cthulhu R'lyeh wgah'nagl fhtagn" ("In his house at R'lyeh dead Cthulhu waits dreaming"), is often embarrassingly misspelled in such a way as to be translatable as "In a sushi restaurant in Ryloth topless Cthulhu waits tables."[1] 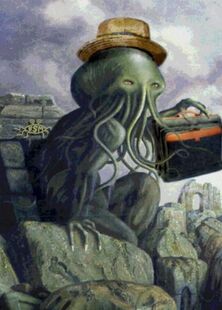 In addition, Cthulhu is the author of several published works, most of which are self-help books for upper-level business executives, wealthy investors, and religious leaders. Titles include:

Several of these books contain valuable pearls of wisdom that only Cthulhu could have produced, but since not one person has ever read a single page of any of these books and lived, our only alternative is to make up quotes from them, too.

Cthulhu on Your Health

-to a screaming Japanese Schoolgirl

^ 1. This is, of course, patently ridiculous, since bare breasts were strictly forbidden in all R'lyeh eating establishments.

^ 2. No living human being knows for certain what the letters "ACG" stand for in this context. So far the best guess appears to be "Anime Cigarette Guy," but luckily, nobody cares.