“This wallpaper and I are fighting a duel to the death. Eventually one of us has to go!”

“...and now, Miss Moneypenny, you know why I always wanted my martinis served shaken and not stirred.”

“Alas, it looks like those unsubstantiated rumours about me are about to come true after all this time...”

“These are my last words.”

“It is not death that I'm apparently now succumbing to, but the rapid diminishment of lifeforce from this body of mine.”

“I'm fine. I'm just waiting for Thanatos to come for a visit.”

“I absolutely and unconditionally regret, remorse, and above all, am sorry for the truth and realization that I've neglected, dishonored, and ruined my chance, opportunity, and moment to spend my time on Earth, Terra, or the Earthly Realm with, amongst, and together among my offspring, scions, heirs, children, minors, sons, and daughters.”

“Me, dying? Oh, so I guess those vitamin C pills I took this morning didn't work after all...”

“I just got a splendid idea: I'll just retcon myself into an immortal elf and head off for Valinor! Quickly, where is my pencil?”

“I was a lifelong atheist, so chances are, I'll be meeting other people.”

“I'll prove to Leonard once and for all that you can swim even with rocks stuffed into your clothes.”

“Yeah, yeah, I know the Mafia is pissed and all that over my legislation. But for God's sake, Jackie, I'm the friggin' president! They can't lay a finger on m...” 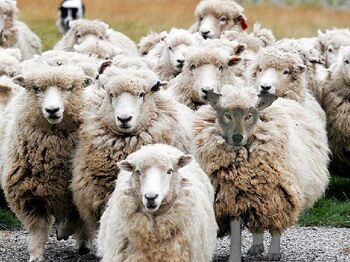 "You guys, surely that strange new member who joined our flock today has some unusually nasty sharp teeth for being a sheep, doesn't he?" – A sheep (translated from Baaish language).

“I am dying, you claim? Do you have a neutral secondary source to back up that unverified, biased statement?”

“Emma, have you ever had a feeling that my entire lifetime of work will only lead to more racial hatred, pseudoscience, and hilarious nonsense?”

“I only regret that I have but one life to give to a global corporate empire of the future.”

“The only thing I hate more than cosmic evil is those pretentious hippies who mindlessly holler names of Hindu deities without giving a shit as to why.”

“I just hope those godforsaken Chinamen won't depict me with a friggin' beer belly. I mean, seriously, even in my hedonistic days I never reached the obesity mark.”

“Dear passengers, this is just a minor turbulence. We will reach the airport in half an hour.”

“Are you ready for a noose sensation?”

“The fuck was that all about?”

“What an artist dies in me.”

“Is it a bird? Is it a plane? Well whatever it is, it's headed straight for us.”

~ Manager of the World Trade Centre

~ Polonius, auditioning for the role of Captain Obvious in his final moments

“O yet defend me friends, I am butt-hurt.”