“Frankly, this whole controversy regarding my theory of evolution has been hardest of all on my poor nephew. He's constantly taunted and tormented at school by people calling him 'ape' and 'monkey'... It's a good thing he weighs 800 pounds, or else Konga's life would be completely miserable.” 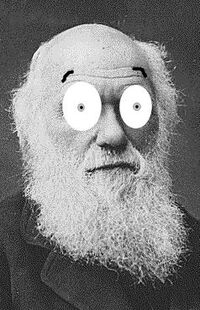 "Maybe it's just as well that I've been dead since 1882. That was pretty much the last year anything cool happened anyway."

Charles Darwin (1809-1882), naturalist, biologist, tobacconist, and author of The Origin of Species (1859) and Priscilla Likes It Clean-Shaven (1869), is perhaps best known as the father of the Theory of Evolution. He is also one of the most misquoted scientific figures of all time, surpassing even Einstein for sheer depth of quotability.

To this day, however, Darwin's theories continue to be hotly contested by religious conservatives, for no other reason than the mere fact that they challenge the very foundations of their belief systems. Indeed, some have gone so far as to suggest that evolutionary theory could be entirely compatible with the concept of an omnipotent and benevolent "designer," but the existence of the platypus effectively disproves this notion.

"I have no great quickness of apprehension or wit which is so remarkable in some clever men."

Darwin on Traveling the World[edit]