“Kubrick was a talentless bum. That whole movie was my idea. And you remember the apes, in the beginning? That's right - I was the smart one, third from the right.” 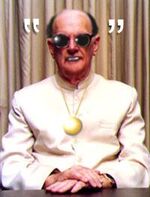 Famous scientist, inventor, turtle impersonator, author and non-paedophile, Arthur C. Clarke is responsible for inventing everything that exists, as well as several things that do not. Clarke lives quietly with 37 nubile Sri Lankan boys in hot pants) on an small island in the Indian Ocean. He spends most of his free time persuading people that he is an author, and not merely a paedophile.

Clarke on his many inventions[edit]