For those without comedic tastes, the so-called experts at Wikipedia have an article about Terry Pratchett. 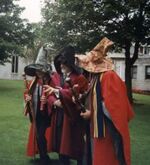 Terry Pratchett (center), in traditional wizard attire with colleagues on the grounds of Unseen University.

~ Terry Pratchett on Himself

Terence "Terry" Ridcully-Pratchett ((28 April 1948 – 12 March 2015) has now left this planet and is on another journey. He is one of the lesser-known wizards of Unseen University, and the younger cousin of the University's chancellor, Mustrum Ridcully. A well-kept secret at the University is that Terry invented the pointy hats that all wizards wear, as well as the eighth colour, the highly magical hue octarine.

Terry's early days were spent in the basement of the University, learning the ways of inventing from Bergholt Stuttley "Bloody Stupid" Johnson and writing books about his travails with the wizards of the University. The first book he ever wrote published was The Colour of Magic, in which he announced his invention of the eighth colour, which only wizards could see, but definitely existed. Having invented it, it became obvious that it had been invented forever.

In truth, the first he wrote was "A Treataizzze on the The best Scale For A Mappe OF Ankh Morpork", but since he

2 b) wanted to illustrate his thesis with an example

he could not get a publisher to undertake the task.

This failure to write a 'serious' work led him to believe that the future lay with 'exposees' of the lives of some of his colleagues.

Terry Pratchett travelled all over the world in which he lived,† writing books about the world and its history. These were eventually collected†† into a series that was dubbed Discworld, because everyone knows that the world is shaped like a disc, with a giant spire in the middle and, according to him, balanced on the back of four elephants on a giant turtle.. Pratchett also invented the city of Ankh-Morpork, where he used to live. Interestingly, the city was originally intended as a steam-powered hair clipper, but given that he learned his inventoring arts from B. S. Johnson, it turned out to be the biggest, dirtiest, flourishing-est city in the world.

Interestingly, Pratchett is allegedly still refusing to autograph body parts, even if they are still attached to their original owner. This is probably owing to an incident in which a fan, after his girlfriend got her breasts autographed, attempted to bring his best friend's left arm for Pratchett to sign.

†Because most people did not want him hanging about.

††Initially in order to burn

Discworld has thousands of gods.† Sadly, most gods seemed to dislike young Pratchett. Even most gods do not remember the reason,†† but some say it started when Terry set out to enslave a demon. He summoned a wizard instead, and once the wizard was in the conjuring circle refused to admit he was not a demon. The wizards of Ankh-Morpork then complained to the gods. As complaining wizards can be quite a bit more annoying than the pebble in your boot that you can't find when you take the boot off, but persists in being there when you put the boot back on,†††† the gods were not pleased. Thereafter Terry received no presents from the Hogfather, or indeed any god. Or any wizards. Or his mum.

This made Terry quite vexed, and he vowed he would have his revenge.

To exact that revenge, he wrote books that parodied gods, pyramids, christmas, rock music, and anything else he could think of to annoy his various fellow inhabitants of Discworld. But, Terry then did something that no one else had never done.

Some briefly referred to him as "B.S. Pratchett" after that, but fortunately for him the nickname never really stuck.†††††

†† But then many gods can't remember who they had for breakfast...

††† Terry later blamed this entire affair on a young man named Eric, who not surprisingly was rather pleased at the notoriety this got him, mostly, he claims, because his face finally cleared up as a result.

†††† This is probably because of quantum.

††††† Apparently due to the hitherto unsuspected fact that Death does, in fact, have a sense of humour, though it is probably safe to say most people would not want to be the object of one of his practical jokes.

Pratchett has been compared to the late Douglas Adams, whose creation of the Hitchhiker's Guide to the Galaxy made him so rich that at the time of his death, he owned almost all of Wiltshire in England. This comparison is accurate in some ways; for starters, both men were born.

In more ways than not, though, the two men are quite different. Douglas Adams, for example, did not invent magic or colours, and Pratchett never created a guide to the galaxy. Pratchett is a midget compared to Adams, who, at 6'8" was once given a prize for being the only windowcleaner in the world who could reach the first floor of buildings without a ladder. Pratchett on the other hand, received no such prizes, unless you want to include his title of OBE, which reflects his fatal attraction to Orange Bellied Elephants. It is also rumoured that Pratchett did not actually know how to fly, unlike Adams, who once famously declared that the trick was to throw yourself at the ground and miss.

"Terry has not once been quoted on Uncyclopedia (Oscar Wilde)"

Well, it may be Oscar Wilde saying that but it's not true. See pun