“You can tune a guitar, but you can’t tuna fish. Unless of course, you play bass.”

“Did you hear what happened to the guy who lost his whole left side? He’s all right now!”

~ Grandma on first discovering the power of the pun

Pun is an abbreviation of the English word "punishment". This term is applied to British punnitententiaries, whose punitive measures include punnet making, being placed in rooms with incredibly pungent smells, and punting footballs. In many cultures, puns have become a satiating form of expression for a world of starving artists. Puns can be truly understood only by pundits, as ordinary people will claim that they are simply "not punny".

A pun in its natural environment

The exact origin of the pun is unknown, but anthropunlogical evidence suggests that it was invented by early human punter-gatherers dwelling on the supercontinent of Pungaea. A punter-gatherer is very much like the traditional hunter-gatherer, but involves the use of a sort of wooden river-boat (called punts). The latest accepted theory is that the word originates from the Indo-Aryan language "Punjabi".

The art was lost for many ages until the discovery of punpowder by Carl Azuz while vacationing in the Japun, which caused victims to spuntaneously erupt in bad jokes.

There are pundreds of instances where puns have been used throughout history, including but not limited to:

In our contemporary world, puns are commonly used by psychic midget fugitives (small mediums at large) and yogis who pundergo dental surgery without anesthesia due to their ability to transcend dental medication. 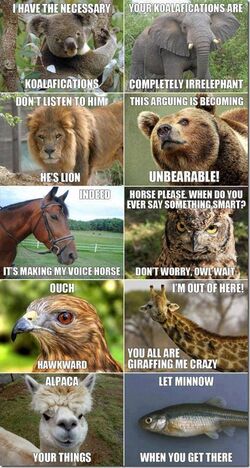 Write off puns, speaks of puns can also be used. Puns can be classified in numerous ways. They could be classified by colour. However, since most puns are mondegreen, other classification schemes have been plotted. Here are some of the more common categories:

(example: if I said you had a beautiful body, would you hold it against me?)

Your coffee is so bad, it's grounds for divorce!

An original pun made up on the spot, as opposed to recycled material you've used before

Time flies like an arrow; fruit flies like a banana. (Groucho Marx)
A hard man is good to find. (Mae West)

(example: 'I never do anything half-assed, unless I met a girl with one ass cheek' or 'Lock the door when you're feeding the toilet')

(example: Whoever reads this is an illiterate)

(Thyme flies when you're having pun!)

Charles Darwin explored much of the evolution of the pun in his lesser known work, "The Origin of Feces", which was poorly digested by the popular press and left a bad taste in their mouths.

Many physicists have made efforts to study the composition of puns, only to complain among bouts of depression weeks later that gravity keeps bringing them down. As for chemists who die trying to analyze the pun, we barium. Some chemists just are in their element when working with puns.

During any chemistry lab, it is very important to wear your safety goggles. Remember, oxidants happen. And do not attempt to tell any puns while dealing with Nitric Acid. Any response to your puns will be a simple NO.

Recent discoveries have centered around the theory of punctuated equilibrium, which explores the uneven time intervals between the emergence of puns in conversation.

In probability theory, the time between puns is modeled by the expunential distribution.

Puns have also influenced the field of genetics, yielding in particular the insight that if the Royal Family didn't keep intermarrying, they wouldn't produce so many bloody hemophiliacs.

Bakers claim to have cracked the recipe to the pun, but will share only on a knead to know basis.

Bankers also looked into the subject on puns effects on the economy but they lost interest when the work became too taxing.

So, you want to become a pun artist. Start out by finding some pun pals to listen to punk rock with, and be punctual at all times.

If you decide to take puns more seriously, get yourself a good pair of punning shoes and learn to speak Punjabi. Before long you'll be puntificating like a pro and punctuating your conversations with punny, punny, puns. Just be sure to avoid pundering to the lowest common denominator. 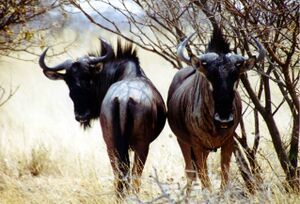 I have some bad gnus for you.

Although puns don't kill people, people kill people who make puns. Because they are so puny. Some say they are all poor entertainers. Even though they own a mansion and/or limousine.

Some sad souls lack punderstanding, and will respund to your humour with groans, grimaces, dead silence, or even threats. They may try to punch you, or punt you from the room.

While you are running away, they may shout pungently after you, "You can pun but you can't hide!" To this, you can bravely respond, "The Pun is mightier than the Sword!" or "Don't bring a knife to a pun fight!"

You can always take comfort in the fact that these punbalanced individuals probably wish they had even a fraction of your punache. In fact, they are probably filled with what the early Romans referred to as "punis envy" (a term derived from the Latin "e punibus unum", loosely translated as "why think of that didn't I?")

Just keep trying to charm them with your spunk and punacity. If their aggression persists, however, it may be better to back off. Remember, it's all pun and games until somebody loses an eye.

Of course, should you tire of wordplay and wish to spend your days in prayerful repuntance, you can always retire from society and get thee to a punnery.

This article really should have eleven sections, because the eleventh section is supposed to make you laugh, especially when no pun in ten did.