The Punisher is rated G: Punishment is suitable for all victims.

For the religious among us who choose to believe lies, the so-called experts at Wikipedia have an article about The Punisher. 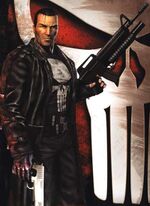 The Punisher becomes a CGI character for a day or two.

In a recent one time interview which ended in the mysterious death of said interviewer via corn-cob to the back, it was revealed that the punisher apparently was harboring some resentment towards his current path in life.

Disney's The Punisher was originally a mythical and highly feared comic book vigilante. However when The Punisher was finally captured and unmasked it was discovered that he was the ghost of a dead Vietnam war veteran cop who escaped the comic pages to appear in a series of low budget action movies and finally into the three-dimensional world of computer graphics. The only reason that The Punisher's fictitious spirit was able to be captured on a floppy disk was because computers were so slow back then. They were so slow in fact, that wheelchair-bound octogenarians used to race electrons in the 100m and 200m events at the summer Olympic games (Those damn superconductors were always too fast at the winter Olympic games).

As computers were improving, The Punisher eventually escaped from the high security laboratory full of nerds in January 2005. The Punisher is a virus-like phantom who invades your PC, Xbox, or Playstation 2, depending on which version you order. The Punisher sucks people from nearby sofas, streets, and houses into the CD-ROM drive, whereupon these people are trapped inside your monitor or television for all eternity. The Punisher then proceeds to brutally kill them repeatedly with his vast array of exciting substances, appliances, and machinery.

He or she who purchases The Punisher is reasonably safe from death, as long as an abundant supply of victims is maintained. Veterinarians recommend purchasing a laptop or portable TV for taking The Punisher to crowded holiday spots; a great chance to stock up victims for the winter months. The Punisher's escapades are best enjoyed with a large home theater, a big bucket of popcorn, and an expensive leather sofa filled with fresh meat.

A question which has been contemplated for centuries asks: is The Punisher a hero or a villain? From the point of view of The Punisher's many victims, who have been tortured slowly to death with all manner of exciting instruments, The Punisher is the most horrible villain they have ever encountered. In their eyes (or just eye if one of them has already been sporked out), The Punisher can only be considered the personification of something worse than true evil, something so indescribably terrifying that there are no words to even pray for it to go away. However, to the Average Joe who is walking down the street, The Punisher is merely keeping the Earth's surface clean of hardened criminals (splattered body parts aside). The Punisher is a sort of Robin Hood of the concrete jungle, massacring the evil to help the good. The Punisher's victims are the sort of people who would otherwise be stealing your kidneys, raping your children, skinning you and your pets alive, and so on. Hence we must conclude that The Punisher is a hero, albeit one who satisfies our torture-related voyeuristic revenge fantasies.

It squeezes the lotion on the skin or it gets the drill again!

This is an official fact sheet obtained from the Australian Office of Film and Literature Classification.

The Punisher doesn't really have a rogues' gallery like most other super heroes, or the police, instead he has a shooting gallery. At least Blade has Deacon Frost and Dracula as reoccurring enemies to keep him company in between his heroic killing sprees, but the only crook to get in The Punisher's crosshairs and live to tell about it is Jigsaw, an off brand rip off of Two-Face, and he's never going to have the same level of brand name recognition as the guy from those Saw movies. No, Frank Castle's enemies are all either dead, going to receive the death penalty from him as soon as they are released from jail, or about to wish they were dead as soon as they see what unspeakable horrors he has waiting for them.