From Uncyclopedia, the content-free encyclopedia
(Redirected from Iron Man)
Jump to navigation Jump to search 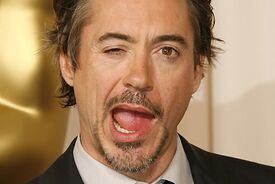 You look like the kind of man who can appreciate fine ballistics, if you know what I mean.
Oh, you don't? I was talking about boobs...

Good afternoon, sir. My name is Tony Stark, but not many people are aware that; hold on, I need to step back for this.

Ahem, not many people are aware that...

I AM IRON MAN!

Well, I'll tell what I have; Money. Lots of money. Like, shitloads of money. I have so much fucking money that it would make Bill Gates look like a rice farmer from a third-world country. I also got this suit. Neato, isn't it? It's got, like, rockets, and flight stabilizers, and bullets that can bend around corners or something. You know what the best thing of all is? Check this out, it's gonna blow your fucking mind, man! Underneath this titanium-gold alloy mask... is a beer dispenser. A fucking beer dispenser. Isn't that great... yeah. So, how much can I sell this to ya?

You want to sell me your costume?[edit]

A costume? This is so much more than a costume. This is a machine of death, my friend. No longer will you have to put up with that asshole at work, that Jehovah's Witness next door, that wigger in the parking lot. With this suit, you will become the most powerful man in America. It served me well before, and now I want to pass it on to you.

Why? Why? Are you dense or something? The world's greatest entrepreneur calls on your front door offering to grant you, for a small nominal fee, the powers of a superhero, and you ask why? Screw it, I bet I can get a better offer from that Iranian family across the street.

Hold on, I never said I wasn't interested. I'm just curious about it. Where did you get it?[edit]

For those without comedic tastes, the so-called experts at Wikipedia have an article about Tony Stark.

I didn't "get it", man. I made it with my own goddamn hands. Check this out; I was rolling through the desert in Iraq one day, doing a demo to sell these nuclear warheads to the American Military, when out of nowhere these Al-Qaeda looking motherfuckers ambush us. I'm embarrassed to say... I was captured. But not without a fight. I managed to take down fifty of them, before they launched one of my own into my chest. I know, I should really go by Irony Man, right? After that, I kind of passed out, and everything went hazy for a while.

It's a long story, but basically, me and this other scientist were ordered to build those filthy terrorists a new nuclear weapon. Osama Bin Laden himself, put a gun to my face and ordered me to design his weapons of mass destruction. I agreed, but only so I could buy enough time to create this suit and break my ass out of there.

What happened to the other scientist?[edit]

Cue awesome music as I roast me some Islami-sandwiches.

We were close to finalizing production on the suit, when Osama realized what we were up to. He sent some men to come and check on us. I pleaded with him to put on the suit and get it ready, while I created a distraction, but he told me "No, Tony Stark. You must put on the suit, for you are better than me, and I would gladly give my life to help you escape." I begged him to stay, but he ran off, and was killed. It was on that day, that I burned Osama bin Laden to death, and vowed to uphold American freedom...

I'm pretty sure I saw him on the news a few days ago.[edit]

Well, in case you never noticed, what the news reports and what really happens are never the same thing. Now, are you going to buy the suit or not, because I have plenty of other customers who would be more than happy to pay double of what I would accept from you.

Well, sell it to them.[edit]

I already told you, I can't. In case, by way of some major mind fuck, you've forgotten; I am a superhero, and superheroes cannot allow their powers to fall in the wrong hands. I could sell it to the Armenian family across the street, but for all I know, they could be terrorists, man. Fucking terrorists! The same fucking terrorists who grafted an electromagnet onto my chest as a joke! That's why I want to sell it to you. I've only been on your doorstep for about 4 minutes, but I can already tell you're an upstanding citizen; one a superhero could easily rely on.

Yeah, I don't think you're actually a superhero.[edit] 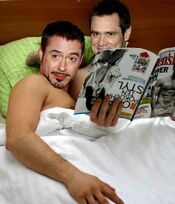 Does a thuper-fabulouth fashion sense count?

What? I'm a total superhero!

Really? What superpower do you have?[edit]

Well, I don't really have any powers to speak of... But not all superheroes have powers. Like Batman and The Punisher.

Of course. So you must know martial arts, yeah?[edit]

Actually, I don't really know any martial arts either.

Okay, but I bet you're really accurate with guns and stuff.[edit]

If you mean with the suit on, then yes. But if you mean with an ordinary gun, like without computer targeting assistance, then no... Are you gonna buy it or not!?

I don't know. Why do you want to sell me it, again?[edit] 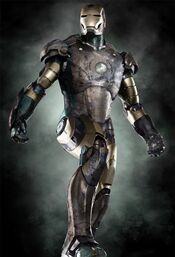 It's got a bit of wear and tear to it, but it should be good to go. Just don't pull too hard on that.

You are such a drag, man! I already told you the reasons why, like, the second we started talking.

No, you didn't. All you did was have a go at me for asking, and then you threatened to leave.[edit]

Alright, I'll be honest with you. But only because you're my super-duper favorite customer! My company, Stark Industries, has been undergoing a slight reduction in terms of product synergy and profits, thanks to that stupid Commie we have running the government at the moment. Normally, this would result in cutbacks on staff, but me being the genius that I am, came up with the idea of selling random shit to strangers in order to create some extra revenue. I just want to save hardworking loyal workers from losing their jobs, man. That's it. There's nothing in it for me. Honest.

Well, why don't you just sell it on eBay. I'm sure you can find some other upstanding citizens who'll pay a higher price.[edit]

Well, I thought that too, and tried it, but eBay sent me a message saying this suit was "too hardcore" to be sold on their servers. I know, who are they to say something's "too hardcore". Please invite me in, I swear I won't take any more of your time.

Alright then. You seem to be a very desperate and lonely little man. Don't you have any friends.[edit] 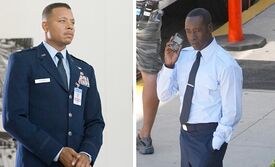 You look me in the eye, and tell me he didn't suddenly jump up ten points on the black-o-meter.

I... errr... used to be best friends with my pal, Jim Rhodes, but then I gave him his own suit so he could be a superhero, but it only made him realize that I was a far better superhero than he could ever be, so he got super-pissed at me cause he's, like, jealous and stuff, and so he hasn't spoken to me since...

Okay, okay! I may have dropped the N-Bomb one too many times. But what am I supposed to say when he jumps from type IV to VI on the skin color scale in the space of a few months!?

Meh. I'm a genius superhero scientist playboy, not a diplomat, goddamn it. If he didn't like the superhero alias "War-Nigger" he could have just told me instead of bawling like a little bitch about it.

Pepper Potts?!?! What kind of a name is that?[edit]

She also got super-jealous of my superhero identity and decided to leave me. Heh, what are the odds? Okay, I may have walked in on her shower-time once too many. I also accidentally left a video camera in her bathroom vent, which due to some freak accident of nature, was set to record. Or more likely, is that she caught a case of the jungle-fever, seeing as she left the same time as Rhody. Coincidence? I think not...

You know what I think? I think that you are a horrible excuse for a human being. You're egotistical, narcissistic, and a fucking moron. Not only that, but your sarcastic, couldn't-care-less attitude has fucking bankrupted your company from the bottom up, and mercilessly pushed away everyone you've ever loved or cared for.[edit]

Wow, what are you, a therapist? Are you going to start charging me now?

PLEASE DON'T GO! I'M SORRY! I DON'T HAVE ANYWHERE ELSE TO GO. EVER SINCE THAT BARACK OBAMA CAME INTO POWER, ALL THE LIBERALS AND ANTI-WAR HIPPIES HAVE BEEN TRYING THEIR FUCKING HARDEST TO DESTROY MY WEAPONS COMPANY. I TOLD THEM WHEN I CAME BACK THAT I WAS GOING TO MAKE SURE THEY DIDN'T GET INTO THE WRONG HANDS, BUT THEY JUST WANT TO KEEP TAKING AND TAKING AND TAKING! PLEASE BUY THE SUIT, I'M BEGGING YOU! I'M SO HUNGRY! I HAVEN'T EATEN IN TWO DAYS! I'LL GIVE IT TO YOU RIGHT NOW FOR SIXTY DOLLARS! PLEASE!

I suppose I could sell it on for profit myself on eBay, although I still can't see the logic in why you want to sell me it.[edit]

*sniff* Thank you, friend. I will never forget this. Maybe now I can start my life again.

Sixty dollars is all a capitalist genius like myself needs. Thank you again, friend. Goodbye.

Ha ha, fool! You honestly thought I would sell a peasant like you my power-armor?

But why, Iron Man? I thought you were a good superhero?[edit]

I wasn't lying before when I told you my company was flatlining. It appears that the current president is unwilling to support Iron Man, and so in response to this dying economy, I have taken on the mantle of the world's greatest supervillain:

Indeed, friend, you have been duped by the world's greatest con-man and entrepreneur! Don't feel too bad. You are but one of many in a long line of cons! Many have been fooled, and none have left my presence without an empty wallet. Goodbye, fool! We will meet again! Now off to the the nearest liquor store! 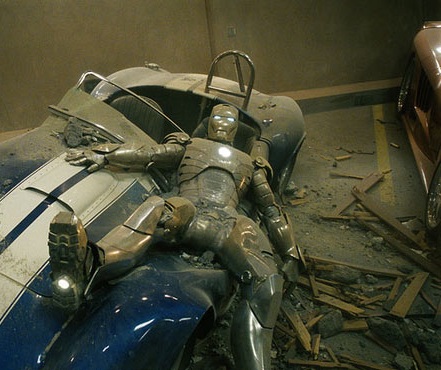 Can you call me an ambulance, please? *Hiccup!* Thank you...