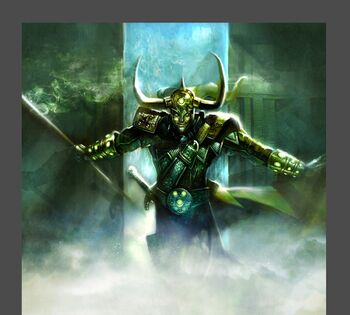 Loki in all his glory as a change agent.

“ENOUGH! You are all of you beneath me!”

~ Loki on the Incredible Hulk throwing him through a window

“Your mum was beneath me!”

Not to be confused with Eris.

Loki is a pagan Norse god who is often misunderstood and considered evil. A creature of chaos who helped develop Change Management and other interesting things. His influence is wide felt throughout the known world. 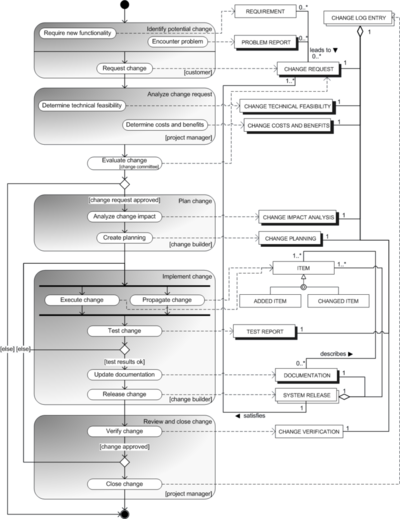 Loki introduced Change Management into the hard sciences, causing the collapse of the former Soviet Union.

Loki was born to Farbauti and Laufey, two frost giants living in the suburbs of Asgard. In one of his many rages, Odin in one of his many fits of rage due to his erectile dysfunction problems destroyed those suburbs and adopted Loki who was the only survivor. Odin thought that Loki reminded him of one of his elder brothers named Lodur. Odin made Loki a god, but all of the really good godly powers had already been handed out. God of Chaos was left, but Loki likes to call it change and considers himself a master of Change Management.

Loki has two step-brothers, Thor, and Baldr who were treated better than he was. Odin always threw parties for Thor and Baldr, but never for Loki. Loki was the original red headed step child and was constantly flogged and forced to watch reality television and reruns of Sesame Street and Barney and other PBS shows. After hours of watching an Icelandic Idol marathon Loki began a mental metamorphosis...

Loki found that he was quite good at bringing about change. He also found that using change, he could shapeshift into different forms. Even become a horse or woman or some other being. He claims to be a victim of circumstances, often others forcing his hand in things.

Aside from these skills, Loki also enjoys a good meatloaf, but only with garlic salt on it. Likewise, Loki is a talented player of the Skin Flute. He has been known to entertain several crowds at a time with his unparalleled talents.

Snorri´s account of Loki has him influenced by Christianity. Some say that Loki had helped spread it, converting Pagan temples into Christian ones. Some disagree and consider The Poetic Edda which is not influenced by Christianity. Yet Loki does have fun controlling the God-Fearing Republicans as well as controlling Prosperity Wicca. Making Loki one of the few Pagan gods shared with Christians. If you are a Christian you may be a Loki worshiper and not even know it.

Loki is known as other names. Some people call him Jack, Eris (when he's in drag, or is it the other way around), Loke, Lowkey, Loge, Lokkja, or Lohho but his name is exactly like Marvel Comics spells it, as Loki. This is because Marvel Comics has the factual view on the spelling of Loki's real name, and it supersedes all former literature written on Loki. Why Jack Kirby spent a whole two hours researching Norse mythology when developing The Mighty Thor and Journey into Mystery comic books, so we know this to be the true spelling of the being known as Loki. Jack Kirby also said that Thor does not wear a beard and has blond hair and not red hair, like other Norse literature claims. Clearly Kirby is the most experienced researcher on Norse mythology that there ever was. The only thing that Kirby got wrong was that he made Loki a villain, when clearly that was not the case. Many followers of Loki protest the Marvel Comics typecasting of Loki as a villain, and say that Thor was the real villain. Yet clearly the debate goes on.

It is rumored at the end of time, that Loki will lead the battle of the bands in a Ragnarök and Roll concert. Loki and the Frost Giants are to take on Odin and the Asgardians in this epic event. The event will be so loud and powerful that it might actually destroy all creation and lead to the birth of new Gods, or at least allow Scientology to take its place. It is commonly believed to be hosted in Norway with Dimmu Borgir playing in the interval.

The Internet is full of people who chose Loki as a handle. This is because of how popular Loki is, and how cool hip youngsters want to emulate him. Loki is chosen more often as a handle than Batman, Captain Kirk, or even Oscar Wilde. 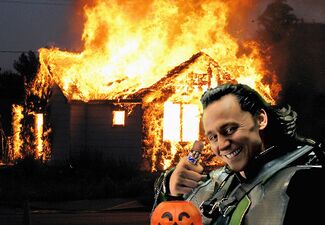 Despite his current busy schedule, Loki still takes time out to celebrate Halloween and other holidays.

Loki helped out in the War on Terra with the appearing/disappearing weapons of mass destruction trick in Iraq that lead to W's missing donuts. He also instructed prison guards on how to interrogate suspected terrorists in Abu Ghraib Prison and instructed them to take pictures. He was also providing George W. Bush with lots of useful advice on how to run the USA and stay in power.

Loki even found a way to reorganise parts of the south in the USA, esp the red states. It is all part of his urban renewal project.

Around 2004, Loki underwent a sex change operation to become female to start a singing career to fit in with the glorious divas of the 90's such as Christina Aguilera and Britney Spears. He did a body swap with the Lady Sif and left her in an old woman's body. Unfortunately his/her career met its end when the Mighty Thor discovered his brother scheming to destroy the entire state of Oklahoma. Loki recently underwent another sex change operation to become male again after much prodding from the Jew and personal buddy Brian Michael Dumbass. Lady Siff got her body back and Loki got back his original body from Hela who kept it safe. Loki could have just shape shifted into any woman form he wants to, but figured this way was more fun. It really ticked off Thor that his Half-brother Loki was in his girlfriend's body and trying a Diva singing career that would destroy the state of Oklahoma. Asgard was relocated to Oklahoma after Odin did a big war with Surtur the Fire Demon that destroyed Asgard and Thor got the Odin Power and relocated it to Oklahoma. While still in female form, Loki made a deal with Norman Osborne aka Green Goblin bka Iron Patriot to bring Asgardians to Dr. Doom's nation of Latervia for hunting and stuff. Loki tricked Thor into killing his grandfather Bor and broke his hammer and got exiled by Balder who took over as King.

In 2008, after being screwed by Marvel Comics and the Republican Party, Loki rigged the election so that Barrack Obama would win the Presidency. This is because he wanted to be Vice President with John McCain but he picked Sarah Palin instead. A McCain/Loki campaign would have won, but the McCain/Palin campaign failed miserably.

For those without comedic tastes, the so-called experts at Wikipedia have an article very remotely related to Loki.
Retrieved from "https://uncyclopedia.com/w/index.php?title=Loki&oldid=6138420"
Categories: