This is the real FBI.

For those without comedic tastes, the so-called experts at Wikipedia have an article about Female Body Inspectors.

The Female Body Inspectors (FBI) is an agency of the United States Department of Justice that serves as the largest sexual harassment enforcement agency in America. They are headquartered on the beaches of Southern California, and are also not an organization that you want to mess around with.

Here is an agent preparing to do some training for "inspecting" the contents of a suspect's clothing. Note how the female agent is pretending to resist, requiring the male agent to adjust his readiness stance using their patented "Bump and Grind" technique. Also his hair is gay.

The FBI (Female Body Inspector) is a crack government law-enforcement agency founded in 1492, by demons, in order to fight aliens. The alien invasion plot originally involved copying all the movies in America in order to collapse the movie-making industry and watching as the entertainment-reliant public shriveled and died. The aliens of course failed to realize that reality TV is the main source of entertainment in America. It contains many shows that show the amazing female figure. Nonetheless, the FBI was set up to maintain the public's ignorance of aliens. The first FBI Director, Alexander Mahone, was, in fact, an Alien. While this may seem contrary to the mission of the FBI, recall that they intend to keep aliens secret. The more he kept his kind hidden from ours, the fewer interviews with Ted Koppel he would be forced to do. Thus, under many layers of cosmetics, he managed to achieve some measure of normality. In fact, recent reconstructions of his death mask, found in his tomb at Gaza, suggest he may have looked more human than Michael Jackson, a somewhat less skilled alien, despite his more modern cosmetic options.

The FBI has continued to play a key role in human/alien relations. Indeed, Oscar Wilde (a well known agent of the FBI) was one of the first ambassadors to the alien's homeworld, famously describing it as "weird," and recalling that they "really, really like Ben Stiller." This is, in fact, one of the reasons he can be found in so many movies to this day.

Interesting Facts About The FBI[edit] 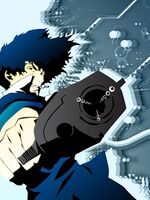 Windowless vans with believable but obviously fake business logos. If in doubt, walk past with a companion while casually mentioning that the profits from your mafia ties put you in an excellent position to hire a hitman to assassinate the president: the real FBI tend not to blow their cover, so if no one emerges from the van following this simple test you can be sure "they" are, in fact, a "They". (They can also be seen driving black Suburbans & black Ford Crown Victorias.)

They are running about the world shooting people saying they are not members of the FBI but they actually are. To prove it yank hard on their face and it will fall off (it works trust me).

During the only notable of all the American civil wars, Abraham Lincoln discovered evidence of Southerners infiltrating the Union ranks when the urbanized North slowly began to defeat the redneck South in battle. He ordered the formation of a federal agency, giving the name Find Blasted Infiltrators! when asked by his underlings.[1]

When the Civil War came to an end, the surrendering Generals were hung for treason, and Lincoln had been tragically assassinated, Andrew Johnson changed the Plans of the FBI, renaming it the Federal Bureau for Indigence, and instead had them target all who were not White, Christian, Land owning, American born, males. Upon his impeachment, this group was fabricated and temporary disbanded.

During the Presidency of Calvin Coolidge, the FBI was reformed under the Directorship of J. Edgar Hoover. Coolidge had a new plan for the Bureau. He wanted to use the Bureau to hunt down and clean up crime across America. Hoover was well known for cleaning up the East, and his skill with dressers (being another, less popular, word for bureaus), and thus was unreservedly chosen by Coolidge for the Job. Under Hoover's command the Federal Bureau for Indigence captured and executed over 3000 criminals up to 1945, when public opinion threatened to shut down the group. In order to avoid another closing Hoover renamed the group The Federal Bureau of Investigation.

The group continued to have moderate successes with capturing Criminals, but due to their title as a law enforcement group they could no longer directly execute the criminals.

As the Cold War went on the Bureau began having trouble capturing criminals. It was due in large part to the fact that many criminals of the time were communists and lived in Russia. In order to cope with the new old world, John F. Kennedy fooled convinced the United Nations to allow the FBI to hunt criminals across the Earth. In order to stir more support out of the American population, The FBI officially released a list of the FBI Ten Most Wanted Fugitives. When commoner Citizens saw that the FBI was awarding people for capture of criminals, they span into action and began a wave of criminal arrests.

In 2001, several viewed of America's Most Wanted[2] few stayed on the list for more then a few hours because the American television audience were mistaken into believing that criminals on the list were Wanted Dead or Alive. As a result of this comical misunderstanding, over 450 criminals were killed less than 48 hours after making it on the list. The show's producers were subsequently sued for $15 Billion. While the show was canceled it also resulted in Republicans taking over the Fox Network.

Since then the FBI has continued to hunt criminals around the world, often in such close competition with groups like INTERPOL that their respective agents are often nearby when unfortunate accidents unexpectedly occur to the agents of the other. 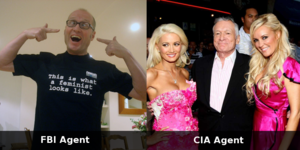 Due to these operational differences, many FBI agents have come to resent their CIA compatriots. This has led to much harsh name-calling on the playground outside the White House. After the Jungle-Gym affair of '95, several CIA agents gunned down unarmed FBI agents during White House Press Conference. The FBI organized an "agents rights" campaign but the paperwork regarding the Jungle-Gym affair had been inexplicably lost leading to a general dearth of prosecutions of the alleged assailants.

As the cultural gulf between the two agencies grew, the legislature instituted funding for a "diversity awareness campaign" so that members of the populace stopped confusing agents of the two rival agencies. Even President Bush succumbed to bigotry when he once quipped during an interview: "I thought they were all feds!"

In 2010 when it was discovered that the NSA was expected to generate copious amounts of paperwork without abiding within the framework of the laws of the United States, CIA and FBI agents for the first time had a common enemy and declared a truce to deal with the NSA occupation of their lands. The FBI and the CIA bought a bunch of cheap rockets and attempted to fire them at NSA headquarters down the block. Unfortunately, the rockets were generally ineffective and the NSA responded with a massive aerial assault on both factions which resulted in heavy casualties to the FBI and CIA. "The NSA has a right to defend itself against unlawful aggression" President Obama made clear to the American people. "We will drive the occupiers from our lands!" declared a CIA agent who was appointed to speak for the coalition. 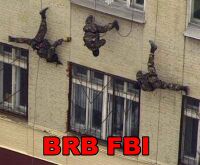 The FBA's special training program, taught to the new recruits so they can catch Spider-Man as he is climbing up a wall.

This myth was only proven today in late-breaking news, when it was also realized that the term 'FBI' is actually an acute ploy to make their agents safer. The last letter of FBA has been changed to an 'I,' and cover-up meaning was invented. The location of the headquarters was also changed to draw any and all thoughts of the FBA off Australia and thus making it safe from terrorism.

During today's discovery, certain facts were also revealed which indicate that the FBA's methods of protecting Australia (esp., Mt. Zeil) from Terrorism involve antagonizing terrorists and baiting them to attack America. Possible motives for this attitude include Americans being complete morons, Aussies hating Americans, or the serious need to protect the world's only supply of precious Vegemite, made from the innards and fecal matter of microscopic blobs.[3]

It was kinda funny; we had a BBQ that afternoon. LOL. Americans.

The name of a small Rock & Roll band that toured with Lee Harvey Oswald, in deference to what was a very popular slang term at the time, "Feel Barry's Ichtyosaurus".

It is also popular among dirty perverts (teenagers) who think it is funny to be called "Female Body Inspectors", and know of no other methods to approach girls.

Invader Zim's Side of the Story[edit]

According to Zim's big TV, the FBI that they were developed by a bunch of crazy people who fought aliens with corn. Not much is known about this theory and it is believed that they may be watching all of us through our toilets. Zim was questioned on this, but his response was a tad bit negative. "Filthy, filthy little worms! I'll fuck your girlfriend, or something."