For those without comedic tastes, the so-called experts at Wikipedia have an article about Jessica Alba.

“There's only room for one super hot Jessica in this world!”

Jessica Alba aka "Sexy McHottie" is the Anglo-Saxon goddess of sexiness and lust. Contrary to popular belief, Jessica Alba is NOT a Mexican transsexual actor, although she has appeared in several movies and television shows in Mexico. The heiress to the Alba electronics empire, she spurned a life of opulence (and debauchery) in favor of a life of acting (and slightly less debauchery). She has since become a poster girl and inflatable sex doll for sexually insecure jocks and pathetic anorak nerds all over America.

Alba is regarded as the Absolute Sexiest Jew Ever. She converted at 16 under the direct supervision and counsel of Jewbacca. She is also known as the fourth whitest girl of Hispanic ethnicity in Hollywood, despite actually having the ability to speak Spanish. 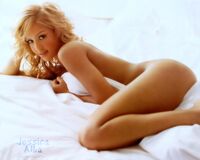 You know you want some.

Her acting debut came at the tender age of 5, when she appeared in "E.T. 3: the Extra Testicle". She also appeared in almost 30 crappy kids shows that aren't worth mentioning, and Spanish soap operas that she does not want you to watch. She also starred in major motion pictures no one remembers, except for guys saying that "Jessica Alba was the only reason I went to see this piece of shit. There aren't any adult theaters located within a hundred miles of here. Is my fly open?"

Alba has stated that she will not go nude in any movie, effectively putting an end to her film career. She has a pathological urge to vomit at least once a day, picked up after walking within five feet of Paris Hilton in 2006. She believes that Paris is her ugly, disgusting evil twin, and she can not help herself but vomit and feel sick in her presence. 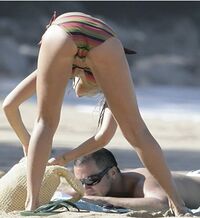 Jessica shows photographers where they can stick it.

She is best known for her widely recognizable ass which is named Sally. Often when Jessica Alba is sighted, it is not her, but her good friend Sally that is spotted first, and taken as a clear sign that Jessica must be nearby.

Many girls believe that the guys who obsess over "Sally" (Jessica Alba) need to find a way to get over their lust for her. To find a way to make guys forget about her, girls around the world are getting together and planning to kidnap Jessica, take her on an island, and tell the rest of the world that she died. They still do not know for certain if that is going to work. Women, however, still claim that there is also a rare species of mature and honest men that give no attention to Jessica Alba because they prefer being faithful to their women.

She is no longer allowed outside because too many men are creaming their pants and attempting to rape her. While indoors, she engages in webcamming, drinking gallons of soymilk (which male handmaidens happily and freely supply), and other schoolgirl activities which she never got to participate in because she was incredibly HOT. She has been seen dating Yoda and some other Hollywood seniors in recent months. She said she handpicked them because, "They've been around, and they know so much." Previous to this, she just had sex with whomever she saw who had the largest penis. She once had a relationship with Timbaland but it ended after 4 minutes with Alba citing "Justin Timbaland just has an insatiable thirst for playing the spoons." Timbaland denies ever having even seen a spoon.

In 2007 Jessica Alba was featured on The Red Potato Publicity Page, she is deeply moved and had apparently been a fan of the Red Potato for some time previous to the announcement. She was awarded for her bravery and valor in times of unrest.