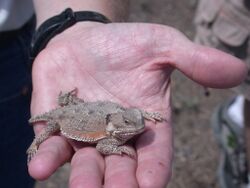 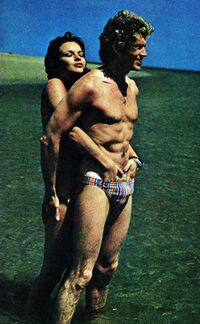 Being horny is a disease that one covers up in the early stages. It can be triggered by the fold of your jeans, wearing shrunken boxers or trying to squeeze your enlarged organs into a pair of pants you had when you were 11. Other stimuli can come from watching Justin Bieber or cheering on your team on a sports field. To find a safe way of trying to curb your own sexual enthusiasm, you have to be willing to experiment. Just placing your hands there or trying to squeeze the sack won't work. One favourite method is by sticking one's hands in one's pockets and pushing the thumb outward as far as possible while walking in an obvious sort of hunched over position and hoping to god the cool kids don't notice), gives up trying to hide by the time one reaches 25 or so, and then feels the need to aid in the later stages of life by means of viagra, the weekender, and popping the cherries of innocent teenage girls who mistakenly happened by the church on her way home from school. 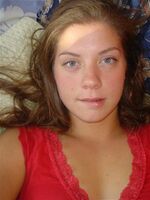 A rare picture of a woman that's actually horny..."Feme-Horny"; long believed to be a myth, was recently discovered on myspace and in Rhode Island.

Some humans have made great efforts to find 'horn substitutes'. Popular amongst computer scientists, mathematicians and other shunned members of the community at large is the 'implant method'. To combat the horn, tiny lasers have been inserted behind their nipples. This diverts the brain arousal signal away from the groin to more socially acceptable part of the body. This has lead to the popularity of the Nipple Laser. It comes from the circulation of blood being simutaneously tricombusted into the form of electric waves that descend from the brain, down the spine and avoiding traffic jams in the pelvic region, shoot back up to the chest. That is why you should always check your insurance cover when partying with computer code experts. Proximity to their bodies could literally set you on fire.

The secret to having "laser tits" is to create arousal and stimulation in the mind and body while at the same time keeping your chest and especially taut pores extremely cold—almost subzero temperatures. It is with this natural ability that John Wilkes Booth was able to assassinate President Lincoln from behind closed doors. He was found earlier at the bar demanding ice and a rubdown from the male serving drinks. If Wilkes hadn't been aroused by the black Scottish terrier he brushed passed to the bathroom, he would have never been able to shoot bullets out of his nipples. Abe would have stayed honest, the shortage of white sheets in the South would have never happened and the Civil Rights Movement would not have been necessary. Martin Luther King would have lived out his days as a special advisor to Bill Clinton. 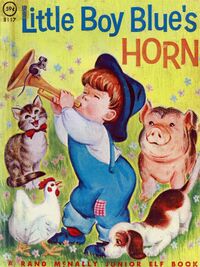 All boys go from the metaphorical to the literal around about this age, or a lot later.

Since men are notorious about their inability to keep it in their codpieces, a lot of history is essentially the 'need of horn' or cornucopia. Julius Caesar and Mark Antony let their need of it dictate their lustful chase of Cleopatra. Her various methods of cultivating horn gave Egyptian queen the title of 'Queen of the Toga Pole'. The Roman Empire was undone by later emperors who either couldn't get enough of horn or tried to stay away by developing different vices. Nor did the impact of Christianity affect this. Monastic became onanastic as abbeys turned out generations of sexually frustrated, horny holy men.

Later, men of power would show the same weakness. William Shakespeare's plays are replete of horny-corny humour, men 'wearing the cuckold horns' or becoming a strumpet's crumpet. Men tried to get away from the urge by becoming an explorer but as is obvious with landmarks like 'Cape Horn' and the 'Horn of Africa', some obviously couldn't get it out of their minds. Others have tried multiple marriages like Henry VIII and Charlie Chaplin to curb the horn but failed. Everyman is a Little Boy Blue who wants to blow his own horn or get someone else to do it for him.

Today, the spread of horniness amongst men has allowed it to be socially acceptable. Now even women can admit to it without getting stoned or executed (except in Saudi Arabia, Iran, South Carolina, Disneyland..). Horniness has become a leading medical issue as the expectation and gratification of horn will lead to the extinction of humanity, followed closely by the Rhino and the Elephant, especially when horn runs out and we have to start on tusks. 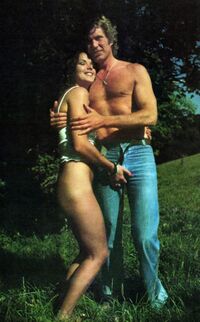 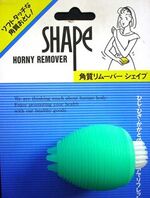 Since the source of women's horniness is a lot more complicated, they have their own branch of medicine known as Gynaecology (not Geology as some believe) to offer advise and invasive cameras. Men have theirs too but it is called Selective Genital Elephantitis or Enlargement Surgery in the vernacular.

Over centuries, these have been the cures that woman have been treated with to douse down their libidos (batteries not included):=

All have worked in the past and who is to say, they will not work in the future. Surgery is also an option but not available to Catholics without a signed letter from the Vatican.