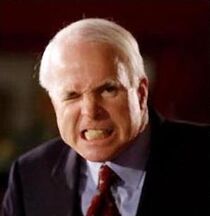 “Ladies and gentlemen...they've got me.”

“John McCain was a pussy I wouldn't grab.”

John Sidney McCain III (August 29, 1936 – August 25, 2018) was a U.S. Senator for Arizona, captured war hero, and master of the napalm and "bomb everyone back to the Stone Age if they oppose the USA." He selected the Alaskan foam head Sarah Palin as his 2008 USA Presidential running mate, but ultimately lost to the tag team of Baracky Maivia and J. "The VIP" Bidster.

McCain left the building of life for good in 2018, becoming the retrospective hero of the anti-Trumpists. His unexpected conversion to becoming a American liberal hero is proof he was a closet progressive all this time. Just that he liked bombing people, something of a hobby he shared with John Bolton. 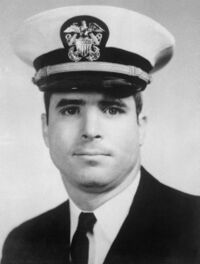 McCain was born in Panama. If you check Google, you will notice Panama is in Central America. This should have made him ineligible to become American President according to the Constitution of the USA permanently bars anyone born outside the United States if they're not a "natural-born citizen". McCain claimed as he was born in the USA's then-"military zone" in Panama, that counts as "American territory" — even if it wasn't. This also presumably bans anyone conceived with artificial insemination or born as a slave (not something you would have a choice of). Another story was that McCain was actually born in a hospital outside the Panama Zone. 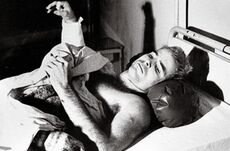 Wave hello to the American people.

Following his family tradition of serving in the American military, the young McCain became a U.S. Navy pilot and took part in the Vietnam War. McCain's career as a war veteran was cut short when his plane was downed over what was then North Vietman in 1967. McCain's reputation as a plane pranger saw him involved in a number of accidents.

His aircraft ended up in a swamp and there was a chance he would have drowned, had he not been rescued by the people he had just been attempting to bomb. The North Vietnamese screened footage of McCain in bed once they learned he was the son of a USA admiral.

What happened next is disputed. McCain claimed he was tortured whilst the North Vietnamese that were only following a CIA manual they found on McCain's plane. Since the USA and North Vietnam were not actually in a declared war, McCain (and others captured) were outside the provisions of the Geneva Convention.

For next five years McCain stayed in Hanoi before finally he was released in 1972 as part of the Paris Peace Accords. Despite his lack of any worthwhile achievements (except killing Vietnamese civilians), McCain was given a five-star hero treatment when he returned and was embraced by U.S. President Richard Nixon. McCain's lingering injuries ruled out any further active service and any other military desk jobs were a problem. McCain just wasn't very bright or knowledgeable about anything. 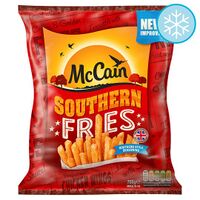 McCain's had his chips.

Looking for an income, McCain sold his name to a company that were looking to market potato chips. This unusual endorsement and claims that he was "a Scot" gave McCain's chips a popular market in Britain.

But McCain got bored. He wanted to move into politics. Since the only qualification to be a politician was egotism, narcissism, and venality...McCain thought he would fit in. He also chose the Republican Party as they were keen to spend a lot of money on the U.S. military.

For those without comedic tastes, the so-called experts at Wikipedia think they have an article very remotely related to John McCain.

McCain was first elected as a Congressman and then a Senator for Arizona. His early career in the U.S. Senate included a money scam whose details were skated over. Unusually, his co-corrputees were all members of the Democratic Party. This was an early sign that McCain was non-politically tribal if there was something shiny at the end.

The War Zero also left his first wife for a much younger woman. The Christian evangelical wing of the Republican Party waved this through as McCain had promised not to do this again. Unlike Donald Trump, he kept his word on that. 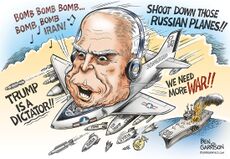 In the late 1990s, McCain convinced himself he was the ideal presidential candidate. First he had to beat the family of George H. W. Bush and their Saudi Arabian-backed son George W. Bush. At one stage it seemed McCain would get the Republican Party nomination until Dubya's fixer and evil genius Karl Rove claimed McCain wasn't American (the "Panana issue"). In addition, McCain had fathered a child on A black American New York prostitute (a score 5 on all things Republicans hated) and if you said to him "Ho Chi Minh", part of McCain's torture experience would trigger something in his brain and he would order the bombing of Washington D.C.. George W. Bush won easily.

Though still very sore at George W. Bush and his cohorts for their monumental trashing of his reputation, McCain still voted in favor of every war on the table. This included Afghanistan and Iraq. At one stage McCain thought of joining John Kerry and running as his Vice President candidate in on the Jackass Label. The Democrats recoiled at this choice and Kerry instead added John Edwards to his ticket. George W. Bush won again. 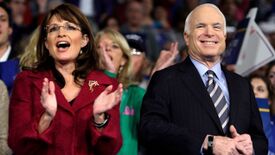 By the end of Bush's presidency, with everything associated with "Dubya" associated with failure, the Republicans eventually went with McCain as their standard bearer. McCain's inability to connect with the wilder-eyed (but politically-active) wing of his party led him to choose the crazy cookie Sarah Palin. This was to match the perceived success of the Democratic Party's runaway nomination Barack Obama (beating both John Edwards and Hillary Clinton). McCain thought he needed someone popular and...a woman.

McCain would later say that Sarah Palin had been "fun", but less qualified to be head of anything than his own wife. The McCain–Palin campaign didn't recover from a number of her crazy statements. McCain had failed again. 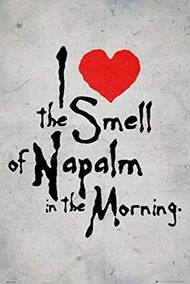 The loss of 2008 and his own advancing age convinced McCain that he would eek out the rest of his politics in the Senate. McCain liked that at least his adventures with Sarah Palin had given him an interest for speaking tours and talking heads on television. He thought of himself as a the "honorable maverick" who was strong on the military but a bit less rigid on other issues.

This was somewhat damaged by his associated with the Tea Party but McCain liked to contrast himself as a "deal maker" in the Senate. He supported Mitt Romney in 2012 and even made his peace with the Bush family, indicating he would be favorable to Jeb Bush if he carried on with some new wars. Then Donald Trump came down his escalator in 2015, and announced his run for the Republican Party presidential candidate.

War with Trump and Secret Information[edit]

Only known photo of Trump and McCain together.

McCain had no time for Trump as he had questioned the U.S.'s involvement in the Iraq War. Then Trump said McCain wasn't a "war hero" as "war heroes don't get captured" (an accusation you could accuse Jesus Christ of as he didn't resist arrest either).

The feud between McCain and Trump intensified when it was later revealed that a secret dossier had been passed to McCain by an agent of British Intelligence. McCain was shocked by the dossier's contents. For someone who had been accused of being an agent of North Vietnam, that Trump could be the "Siberian Candidate" struck home.

The dossier was eventually leaked but wasn't enough to stop the election of Trump in November 2016. When Trump learned that McCain had been involved in an attempt to derail his election, he doubled up his attacks on the veteran senator. 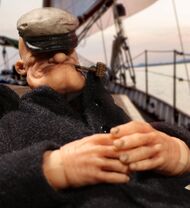 In 2017, McCain was diagnosed with brain cancer. He stopped appearing in public (except to vote down the repeal of Obamacare) and carried on attacking Trump for being a "Russian Stooge". McCain died on August 25, 2018.