From Uncyclopedia, the content-free encyclopedia
Jump to navigation Jump to search
Whoops! Maybe you were looking for Weapons of Mass Destruction, or Iran?

The Sovereign Independent State of Iraq is a beacon of fire situated in the Sahara Desert near Africa. It was once the home of Saddam Hussein, Osama bin Laden, and other Muslims, and was a considered a grave threat to world peace. Because of this, the Bush family America was left with no other choice but to engage it, and to steal its oil, establish millitary bases, and other selfish reasons lead the simple people of Iraq into a new age of freedom and love, just like in the Greatest Country in the History of the Earth, America, home of the brave. It had nothing to do with oil at all.

The word Iraq is derived from mât iraqi, which is the ancient Mesopotamian term for "Land of Raqius," the flying Minotaur banana-shaped god of Iraq. The western and eastern parts of Iraq consist of two alluvial plains, where irrigation enables agriculture, a vital part of Iraq's economy. The capital of Iraq, which is located between the eastern and western plains at the southern base of the Tigris, is named after the ancient iRaqi god Anuus. 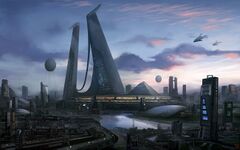 Downtown Bahgdad before the invasion.

Iraq was one of the greatest empires of Antiquity, situated between the Tigris and Euphrates. It was also one of the first places on Earth to be visited by forms of extraterrestrial life. You see, back in the days of Mesopotamia, the Anunnaki from the planet Nibiru crash-landed in Iraq due to a shortage of fuel. They were invited to stay there while they worked on harvesting fuel from available minerals in the area.[1] They built a series of caves to house their factory, where sand and rocks would be converted into gold, their fuel's closest facsimile. Unfortunately, they never got out of Iraq.

After all known civilizations in the world had been mercilessly subjugated, the ancient Iraqis grew so bored that they destroyed themselves, and just to spite us, they took all their wondrous inventions with them. From written records, scientists estimate that even our current technology is only about one-fifth as advanced as an ancient Iraqi toothbrush.

After being deserted for over 1000 years, Iraq was re-founded in circa 1676[2] in the desert near Africa by Ali Baba and the Forty Thieves. Once known as Saudi Arabia, it was famed for its great culture, which included writing stories and making pretty little tweeny-weeny cups and bowls. Its people adapted to its harsh environment by wearing loose, white clothing and growing wild beards. Around 1900, the Iraqis began to worship Allah, the Man in the Sky. This was similar to what Americans do, except in American English, Allah is referred to as God.

According to Fox News, around 2001, Iraq made a pact with Afghanistan and Hummus, forming Al-Qaeda, the most evil terrorist threat in the universe and the greatest threat to America.

Throughout its history, Iraq has struggled with being periodically pwned. Alexander the Great, Ghengis Khan, and even Fox News have all pwned it at various times in its history. Life expectancy in Iraq is thus 14 years of age for men and 7 for women, slightly higher than that of Baltimore.

Iraq is currently attempting to get into the Guiness Book of Records for having the most amount of AK-47s per person than in any other country. They are behind Mozambique by 3. 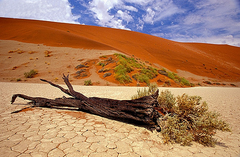 On September 11, 2001, Al-Qaeda (and by extension, Iraq) engaged the World Trade Center and killed nearly 3,000 yuppies. This caused Dear Leader to engage the dark force that was terrorizing the free world: Muslims. Bush (as well as most other countries in the world) knew that the Anunnaki's technology was still in Iraq, and also knew that France was trying to retrieve it by negotiating with Saddam Hussein. Now you know the real story behind the Iraq War.

America has since built a HUGE embassy over the caves at a cost of over $200 Billion of taxpayer money. This is providing a lab for the British & American scientists to continue their understanding of the machinery that was left behind. In a 4 year estimated time period we should be able to duplicate the methods that the aliens were using to manufacture Gold from earth's minerals. Now you know the Real story behind Bush's push into iRaq rather than searching for Bin Laden.

In 2003, our brave heroes, who have done so much for our freedom, crossed the border and entered Iraq. They were greeted by millions of grateful Iraqi people who cried tears of joy, bore flowers, and gave them the chocolate traditionally thrown to peasants after their country has been blown to shit. We then built a HUGE embassy over the Anunnaki caves at a cost of over $200 billion in taxpayer money. This provided a lab for British and American scientists to research the machinery that was left behind. In a four year estimated time period, we should be able to duplicate the methods that the aliens used to manufacture gold from Earth's minerals.

Originally, Bush's plan was to destroy the country with global warming; however, this was discarded when he realized how important it was to get oil and money and "liberate" the Iraqis. It was true that Saddam Hussein was only playing Wizard Chess with his people, but the they loved him. The main reason for the invasion was Iraq's flag design, which was considered offensive to baboons.

In the war, America, the land of the brave, killed at least a million Terrorists People, which lifted the spirits of the world community, and spread democracy, peace and love across Iraq. After our military successfully overthrew Saddam,[3] we demolished his statue and created the newer, much more patriotic flag.

Although some Muslims may have died due to collateral damage, it doesn't matter to us. Iraq is now a democracy, just like America, and the joint ruler is Ankit, who recently converted Osama bin Laden to Christianity. Although America, land of the brave, has several permanent bases in Iraq, it intends to withdraw soon. Maybe next year or something. 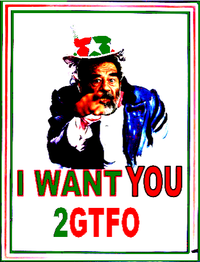 Uncle Saddam, a national personification of iRaq. He is often depicted as a serious elderly man with white hair and a goatee.

Iraq was under the No-Ba'ath Party rule from 1968 to 2003, which caused the nation's hygiene cleanliness to sink to the level of Poland. In 1979, Saddam Hussein exterminated the government with peace jokes and became the president of Iraq. He remained as such until 2003, when he was unseated by a U.S.-led invasion of privacy.

On October 15, 2005, more than 63% of eligible Iraq voters came out across the country to vote on whether to accept or reject the new constitution. On October 25, the vote was certified and the constitution passed with a 78% majority. Happy Iraqi citizens flashed purple thumbs to anyone who would look, certifying that they'd either just voted, or spent the night pricing cans of green beans at the local Safeway.

Iraqi politicians have been under significant threat by the various factions that have promoted violence as a political weapon. The ongoing violence in Iraq has been incited by an amalgam of religious extremists that believe an Islamic Caliphate should rule, old regime Sunnis that had ruled under Saddam that want back the power they had, and Iraqi nationalists that are fighting against what they view as a foreign occupation. The fourth, shadowy, constituent to this conflict is the World Media, who incite daily riots and other outbursts, in the hopes of being able to sell a few more boxes of detergent back home during the prime-time news. Deaths in Iraq are caused by brave freedom fighters who hide in people's homes and blow up the guys walking across the street. The fact that they are killing more of their own religious brothers than the opposite side's insurgents does not seem to come to them.

The U.S currently has a force of around 20 million rednecks, latinos, and ghetto black which are to be considered slaved forever to be in Iraq. As well as spreading American values to the simple people of iRaq, these soldiers also earn $6.75 an hour. You too could be like them.

The British were cunningly tricked into joining the war in iRaq by Al Gore who promised them the chance to kill Pakis, just like in ye golden days of olde.

However, they now rarely venture out of their base, preferring to stay in with a nice cup of tea instead, and when they do venture out they are almost always killed by American friendly fire.

The British Army in iRaq are a traditional British blend of queers and Muslim hating peasants and are led by Generals Sir Elton John and George Michael, formerly of Wham!.

They have no motorised vehicles, guns or helicopters and in combat are forced to rely on sticks and kicking people in the balls.

Iraqis often take a liking to war vehicles such as the LM-AO tank. The LM-AO tank was named because of the fact it is a Heinz Baked Beans tin with wheels and a AK-97 as a turret.

In 2010, following widespread civil war and unrest, president Byron Hadley drew up measures with the intent to restore order and peace - and if anyone broke the rules, he'd put every motherfucker in the infirmary!

President Hadley also drew up rules for a new sport which aimed to improve international relations. Passing croths is largely based around morris dancing, but with greater emphasis on physical contact. A game is won by either setting the opponent's blue smoke pellet alight, or by slapping him with a raw steak. As of March 2010, the current champion is Ged Simmons from Scotland, recently successful in defending his title against Tim Tum Tee of Nepal.

The weather in Iraq is generally Sunni in the north and Shite in the south, with some Kurdstorms in the far, far north. Every year their will be a bullet rain for 5-6 days for decreasing population by around 98%

Iraq does, however, enjoy a 15-minute period of winter between January 12 and January 15, where US soldiers generally wear their cold weather gear and wonder "Why the hell am I freezing and it's only 65 degrees?!"

Iraqis are known as "Space Orcs" because they act similar to the fictional Warhammer 40k Space Orcs in scavenging anything metal. They also share similar appearance and facial structure as Space Orcs.

Iraq has several endemic species. They include:

Abu Ghraib, a new tourist idea for the whole family! You to can waterboard a terriost, just like Jack Bauer! Warning: Only for patriotic Americans!

After you're done that, go visit the 364th US Embassy! At 37 hours old, it's the oldest building in the country!

Modern Iraq art is dominated by the bold and dramatic theme of death.

Iraq is well-known for its numerous exports, such as sand, oil,[4] a thousand "Thank You"s, magic carpets,[5] and cannon fodder for Americans. It is also known for its "Anthraxnohere" farms, where anthrax is hand-grown and picked by orphaned Iraqi children, then carefully placed in barrels to be packaged away to Britain. When Anthrax arrives at Britain, it has many fates, such as:

Iraq is also the leading developer in Class-A virgins. Virgins are grown under the most professional means and then shipped up to paradise to be Allah's bitches 'n' hoes. Others are raped by Americans. 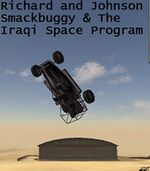 The Iraqi space program attempting to become the first third-world country to reach the Moon. Almost there, guys!