The Philippines is a fictional nation found on the other side of the world. It's the one that isn't China, Japan or Korea. It is also the nation that is both below Taiwan and the average literacy level of an average third-world country. 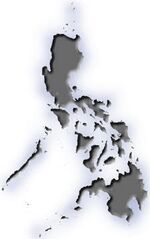 The Philippines shitting some more shit

At the time of this writing, the entire Philippine archipelago is in the midst of being swallowed up by the love of God, because its population does nothing but complain their asses off when certain politicians don't do their their jobs. George W. Bush is said to have launched an atomic bomb into Antarctica in an attempt to raise water levels around the country. This was hoped to eventually end the Filipino diaspora to other countries, and American citizens would finally get a hold of their old jobs taken away from them.

The Philippines is also known for its beaches. What's white in the Philippines beaches isn't the sand, but the sea of Caucasians who've settled there, turning every conceivable beach front into a "resort".

With more smog particulates per cubic inch of air than any other major Asian capital, and with more San Miguel beer chuggers per capita, Manila is officially Asia's gutter slut. Unfortunately, no one has ever actually been to Manila, because no human being would ever actually want to live there. 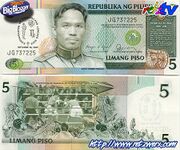 The country's main exports are basically anything exported by Korea, China or any other Asian country. It also exports tapes of local disasters other collective woes (mostly related to poverty) to CNN, but CNN usually only gives a shit for a day.

To help combat the nation's widespread poverty, the Philippines has implemented its two most powerful welfare systems called ABS-CBN and GMA. Outreach programs like "Showtime" and "Eat...Bulaga!" give locals and The Filipino Channel subscribers hopes of fortune and 15 seconds of shout-out fame to keep their minds off the fact that there is virtually no food on their table.

Earlier in the 20th century, the Philippines attempted to make itself stand out from the other Asian countries by emphasizing a thriving trade in prostitutes. They were doing great at first by kicking Singapore's ass, but their attempts proved to be futile when some guy decided to fuck up the 1935 Constitution. Thailand proved to have the better sex trade since their transgendered hookers do that ping-pong ball trick.

Whenever the EDSA volcano erupts, the event is pretentiously called "People Power." There have been two major eruptions and countless minor eruptions since 1986. Pyroclastic flows, lava, and of course people that flow from these eruptions inexorably find their way to the Presidential Palace, where water cannons and armed military guards hold them at bay. Participants often end up disheartened and eventually complain their sorry asses off on local TV.

Filipino men are known for their proclivity to swill Red Horse beer until the wee hours of the morning, nap all day, then repeat the process the following day. The few that do work are usually relegated to menial jobs such as driving tricycles, jeepneys or taxis. They also have a collective thirst for GSM Blue, a rotgut gin that abounds more than the tainted water.

Filipina women, with their honed manipulative skills, are the financial contributors to the family. Through an uncanny knack of acting cute, they frequently swindle unsuspecting foreigners, sex tourists, deadbeats and criminals on the run, of their hard earned savings. The means vary, but the most common method is to use Facebook or some other shitty social networking sites to elicit funds. Don't be surprised if one asks you for money for her "toothache" 5 minutes after initiating a chat. Moreover, don't be alarmed if she asks you 3 times for funeral expenses for one of her recently deceased mothers. Filipinas have a lot of mothers it seems.

A so-called "People Power" protester being PWNED by GMA's Imperial Destroyer during the 12,447th EDSA Revolt.

The Philippine government can be defined as the most deviant of all government systems in the world; getting yourself involved in the government means that you need money, guns, artillery and a bad-ass militia.

Monarchy of the Evil Queens

The government is primarily ruled by a succession of monarchs called Queens, which is highly appropriate given the fact that 90% of all males in the country are professed homosexuals. The country has no current queen, but with the ascension of Corazon Aquino's mentally-deficient son, this might soon change really quickly.

The most popular queen to rule the Philippines is Her Royal Highness Imelda Marcos, who, with her husband-of-convenience Ferdinand, reigned for an untold number of years beginning last Thursday. Just before the end of the monarchy, the general population became infected with a rare strain of virus that turns its victims into mindless evangelists. This eventually brought down Imelda and forced Her Royal Highness Corazon Aquino to the throne.

Aquino changed every single name of every street, road, building, drainage ditch and subdivision in Manila. This tactic eventually proved ineffective because the majority of the motorists got lost and weren't able to report for work for one year, causing the stock market crash of 1986. "Damn, where the fuck is Buendia? I've been going around in circles in Gil Puyat Avenue and still can't find Buendia nigga!", commented one irate black motorist.

The greatest aviation tragedy also happened during Aquino's reign. For almost a year, airplanes kept circling Manila until they all ran out of fuel and crashed because the Manila International Airport wasn't there. "It's like the fuckin' Bermuda Triangle, bitch!", said another irate black person who survived an air collision with a flying unicorn. This was the result of Aquino also changing the name of the airport to match that of her husband's.

Aside from this freakish monarchial excuse for order, the Philippine government is subdivided further into four main branches.

The Leader of the Government

The Media is a powerful branch because of so-called "exposés" they reveal for the purpose of getting more money. Of course they only do these exposés if the politicians involved refuse to pay them. The most powerful person in the Media is Ben Tulfo, host of the TV sitcom "Bitag," which won several awards including the coveted "Best Comedy Show" in the annual Catholic Mass Media Awards.

The Squatters are a potent force to be reckoned with. In fact, they are so powerful that they are able to acquire vast tracts of land from honest, tax-paying middle-class citizens of the country for free--and they get away with it by simply invoking their right to be dirty and poor. The squatters are the most protected group in the government; the other three branches protect the squatters whenever the elitist middle class sues their asses for taking their property. Meanwhile, it is the Media's job to make movies about this tangible display of class struggle.

Squatters are also the highest income generating branch of the Philippine government because of their ingenious ability to smuggle crack and hack cable TV lines.

The most powerful branch, however, is the Church, which can with but a snap of their holy fingers order all the branches of the government to do their divinely mandated bidding, because if they don't they go straight to Hell. 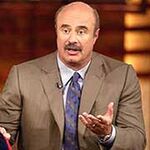 Swear your allegiance to me!

~ Native Girl to some foreign dude with a moustache

The history of the Philippines began when Ferdinand "Freakin" Magellan, who happened to stop by on his world tour, lost in an all-out Kung-Fu battle royale tournament with the natives. Dr. Phil, the then-ruler of Spain, would have none of this shit happening in his soon-to-be backyard, so he personally sailed his decrepit ass across the Pacific Ocean, liberally coated all of the natives with his blubber, and renamed them collectively after himself. This turning point in history was broadcast live on Oprah, although we have it on good faith that Larry King also wanted some of the action.

So it was that Dr. Phil's engorged descendants ruled for around 300 years or so. The Filipinos did not resist this because they were punk ass bitches and gangstahs and made themselves ho's. At the turn of the 20th century, the Mighty Morphin' Americans conquered the Philippines by being DAH BOMB, scaring the Spaniards and buying the entire country for 25 something somethings through the "I Blame You For Sinking My Boat So I Can Steal Your Lands War". The Filipinos gladly welcomed their Big White Brothers hoping that under American rule, there would finally be snow in the Philippines and they can petition themselves to be U.S citizens. Not realizing the promise of snow and citizenship, the Filipinos were forever restless under the Americans by not understanding that the Americans were just teaching the Filipinos on how not to run a crappy democracy. Such a poignant legacy lives on today, through the 1987 Constitution.

An artist's expression of The Filipinos

The Philippines was annexed by Japan as a Japanese province in World War II and made this shit-ass country their bitch because Japan was their fucking daddy who invented the word "Motherfucker" because Japan was everyone's daddy so when they invade a country, the women say "Oh my GOD! Japan is invading again so I have no choice but to be a fucking BITCH!". During the Japanese flyby Filipinos were force-fed epilepsy-inducing Anime while being used as vicarious panty-sniffers. The Japanese eventually discovered Hello Kitty and got bored, leaving the Filipinos to fend for themselves. This ingenious Oriental strategy worked, and now Filipinos with bleach-blond hair want to go to Japan to get a blue card and shit and become ho's for the Japs.

The 1970's saw the Philippine Renaissance, ruled over by HRH Imelda Marcos, who attempted to steal a ton of platinum HDTV's from various Japanese zombies roaming around the country. This did not bode well for the rest of the populace, who effectively declared People Power and exiled her engorged ass, along with her shoes, to Hawaii.

A vast majority of Filipinos speak Taglish, a horrific blend of English and whatever voodoo language emerged over there, which is something like an obscure form of Esperanto, only more confusing.

Oddly enough, despite the difficulty they have in pronouncing English syllables, Filipinos insist on anglicizing Spanish words. Hence, names such as Padilla (pa-DEEL-ya/pa-DEE-ya), Sevilla (se-VEEL-ya / se-VEE-ya) or Revilla (re-VEEL-ya / re-VEE-ya) end up being pronounced as puh-DILL-yuh, suh-VILL-yuh and ruh-VILL-yuh. Actually, only the coños and Filipinos affecting American accents make this mistake in pronunciation.

Also, Filipinos have gazillions of other languages, dialects, and sub-dialects. One other popular language is called Iloko, which is sort of like German, where they make up a bunch of new words by combining old words into one.

Although Filipinos are naturally hospitable and like to speak to foreigners or tourists, the latter must watch out for possible misunderstandings. There's also a new form of language evolving from the feces of Gay Lingo called "Jejenism". It's pretty much a rip off of l33t speak created by idiots who don't pay attention in school.

Equally misunderstood by a lot of tourists is what they pronounce as "Bawl To May Sah Boulevard" when asking for directions. It is definitely not a name of a street, so if you are a tourist, never ask Filipinos for directions to get back to your hotel, mentioning that your hotel is in fact near "Bawl To May Sa Blvd."

Tourists who are diabetic must also be aware that they would only be understood by Filipinos if they tell them they have "Jah-BEH-tess."