The Libyan Oil Producing Islamic State is the country next to Egypt. No, not that one! That is Israel. On the other side. Not that one, either. That country is Sudan. Yes, that's Libya over there!

Libya has a long history of mutual hatred with just about everybody, including Ancient Egypt, the Roman Empire, Italy, and the United States. Italy has never actually been a superpower, so it is funny to classify it as one.

Roman legions conquered Libya in 100 B.C., earning their empire the hatred of the Libyan rebel leader Marius Maximus Fagetus Gadafius, who accused the Roman republic of imperialism. Later, one of his grandchildren, Marius Gayous Maximus Pornoghraphius Retardous Gadhafius, accused Imperial Rome of imperialism. These accusations were ignored, because Imperial Rome was considered to be imperialist by definition. The Romans described the Libyan leaders as "the dogs diagnosed with rabies and sexual drives of the south".

A couple of centuries after the fall of the Roman Empire, Arab armies conquered Libya, introducing the new habit of Islamic extremism to the country. After this, nothing worth mentioning happened in nine centuries. In the 16th century, Solomon the Magnificent, Sultan of the Turks, conquered all North Africa but Morocco and since then Libya became a safe haven for pirates and anti-imperialist Mujahedeens ( the Libyans do not count the Ottomans as imperialists, despite having the biggest empire in the area since Rome, because they have the True Religion. Ditto for the Arab conquerors of the area.) until the 19th century saw the country being occupied and colonized by Italy, which, as the Italians did not have the True Religion, was clearly imperialism.The era of Italian rule left Libya with an improved road network and a tradition of military leaders following the example set by Benito Mussolini. Plus, the Italian colonization also explains why so many Libyan people and places have Italian names, like Khadafi, Tripoli, Benghazi or Ben-Gassy (aka Gassy Ben) etc.

The Green Coup against Italians boosted their so called self confidence (specially their Colonel's).

After the Second World War, Libya emerged as an independent kingdom led by H.M. King Idris. Colonel Qaddafi, known as "the roughneck hyena of the Arab", and his Colonel colleagues ousted the King in the Green Revolution of 1969. The Libyan people had grewn weary of the despotic King and his tyrannic style of rule and wanted to give a chance to a league of despotic colonels and their tyrannic style of rule. History has shown that Libyans are more fond of a Revolutionary military dictatorship than a Royal military dictatorship.

The form of Government given to Libya by Quaddafi (spelling optional) is known as the People's Libyan Arab Jambalya. This is government by shrimp stewed in spices, with rice. Critics say this form of government is unsuitable to Libya, as the country is mostly desert, and seafood spoils easily. Khadaffy hotly denies this in his 'Green Book', as well as charges he is insane. The Green Book also has a very nice recipe for stewed camel entrails.

After the revolution, Libya has been a staunch supporter of Arab nationalism. Because of this, Libya has often been at odds with the Arab world.

In 1985, for example, Libyan terrorists gunned down the greatest scientist of our time, Dr. Emmett Brown. Great Scott! All he did was steal their plutonium. Thankfully Marty McFly was able to go back in time and reverse these tragic events, so they never really happened. But he almost had to make out with his own mom! Actually, the year 1955 wasn't so bad except for all the manure.

Libya has contributed greatly to the improvement of air travel security after benevolently proving in 1988 just how easy it is - in theory - to smuggle a bomb aboard a passenger jet and to detonate it in mid-air above, say, Scotland, killing everybody on board and a few on the ground. As the Colonel explained, his generous initiative was inspired by the way the United States proved how easy it is to bomb the capital city of an irritating country.

In 2011 Quaiddafi revealed the truth behind the Arab Spring. It seems the Martians moved west from Liberation Square in Aegyptus, they drugged the young folks and gave them guns. Moaeoaommar Gaddafi agreed with the Martians that it was about time he declared war on Earth and the extermination of the human race ensued. Unfortunately, the human race would not co- operate with this project, Libyans rose in revolt, and with the aid of bombers from France and Britain, Gaddaffy-duk was driven from power. The different factions then began to squabble over who was the Supreme Government, under the rules of clause AK-47 of the new constitution. This has continued to the present time.

Near the end of 2011, the Supreme Government for that week announced that Colonel Quakdaffy had "been killed in the crossfire". Subsequent investigation by foreign journalists established that the cross fire was the kind of fire that crosses from one side of the head to the other when a gun is placed to it. Requests for clarification were refused by the Supreme Government on the grounds that that was the action of last weeks Supreme Government, which had since cleared out of Libya in order to seize the north half of Mali and establish The Republic of Al-Quaeda in the Maghreb therin. The journalists were, however, able to discover that they would do better to clear out themselves, as you can never tell when another crossfire will break out. Reporting from Libya has been sparse since then, but the fighting is understood to be continuing. 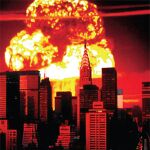 Qaddafi shows respect to US on visit to New York

Libya is known for being one of the largest consumers of nuclear power, because nuking is one the national past-time of Libya. It is generally considered in good taste to bring nuclear-related souvenirs for one's host upon entering their home. If someone says something particularly amusing or agreeable, it is proper not to say "Haha!" or "I concur," but, instead, to launch nuclear satellite to show you rejoice. If one meets a long lost relative or friend in the street, it is considered rude not to show them your portable nuclear Kit and lightsaber and show them respect. It is a common greeting to nuke both parties to show that one is happy for both parties meeting. If a relative dies, friends condole the grieving relatives by strapping a Warhead to the corpse.

A new sport has also been developed For Nucleo Maniacs by the not Great Awesome Oil Producing Significant and Of-which-place-in-the-map-is-Obvious-to-those-having-two-eyes-and-a-nose-and-a-mouth Socialist Fabulous Shiny Socialist Arab-iacly Magnificient Jamaicaharharbiriya, I which a game of "Toss the Warhead" takes place. Due to its Explosive nature, A large number of Fatalities have been reported, nevertheless, the Libyan Fanatic Public consider this a Traditional game.

Libya's attainment of Nukular weapons has been speculated, due to a Rumor leading to a case of Project Theft of Super Secret Nukular weapons Developed by Carl Sagan, a so called American astronomer, astrochemist, astrobiologist, astronaut, and astro-enthusiast in general, have been found.