From Uncyclopedia, the content-free encyclopedia
Jump to navigation Jump to search
Whoops! Maybe you were looking for Tasmania?

Tanzania, or Jibaba la Bongo is a mythological East African Country founded by twelve Bantu monks, who descended from heaven to Egypt to preach the good word of Gaath. In the year 930 B.C, Gaath needed to spread his teachings, choosing the Twelve Wise Bantus to help him; obviously nobody would listen to them because they were black. In this manner, Gaath believed he would thusly have a justifiable reason to send all humans to hell. Tanzania is now a regional bully, and from time to time, it sends its all-powerful military to rape the neighbouring states of Rwanda, Kenya, and Burundi.

Located just off the Indian Ocean, Tanzania occupies a mythical territory originally home to indigenous Bantu peoples. The nation has no defined borders, because its king can decide to change them at any given time.

Absolutely hot, we mean like a muthafucka! Damn, it's hot.. Roasting hot temperatures ranging from oven roast to Bosch freezer cold. Periods of mild weather whenever the king pleases.

The Ancestral Caves of Makongo

The arrival of Gaath's Twelve Wise Bantus in Egypt so frightened the locals that they exiled them to the "Land of Lions", present-day Tanzania - then uninhabited. Copulation between the Bantu prophets and their Rwandan prostitutes eventually produced the modern Tanzanian people. Power was usurped from the tweleve Bantu when Maepkang Miti, who was almost 38484494576 years old at the time, declared himself "Most Supreme Overlord of the Land of Tanzania and all its Animals and Trees". Maepkang Miti went on to order the rape of Zanzibar and attempted to forcibly integrate it into his kingdom.

To get rid of the wise Bantus (who were regarded as a threat to his power), Maepkang forced them to have sex with a white woman from Frankistan. Soon they began to fight over who was to spend each night with her, and the constant bickering led to spear chucking. All twelve finally bled to death from their self-inflicted injuries. Maepkang's takeover was now complete and he proceeded to rule his throne with an iron fist (and buttocks). 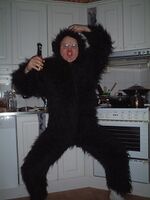 The demographics of Tanzania do vary by location. Depending on the month or season, tourists are less likely to encounter indigenous residents, over half of whom spend their days hibernating in the Makongo caverns. 90% of Tanzanians are the children of the Wise Bantu; 2% are offspring produced from their brief interlude with the Frankistani woman. Of the remaining citizens, -20% are Cherokee Indians, -80% are just plain Indians, and 6% are whites with direct European ancestry - a figure which is shrinking daily thanks to their status as a favoured delicacy. Everyone else is irrelevant on the census charts, but they allegedly include lost South Africans and Zimbabweans who never found their way home before dark....in addition to Jakaya Kiwete (the famous thief of votes and enemy of democracy).

Tanzanians on the way to their ancestral caves.

Tanzania's culture is predominantly Bantu. Europeans are cooked for mating rituals and national holidays like the King's Birthday, since eating settlers left over from failed colonial invasions in the past is believed to reverse a curse the Twelve Wise Bantu once placed on the land. Every year, Maepkang Miti's birthday is celebrated several times by the mass slaughter of toads, doves and white folks, while royal drummers play, day and night. Tanzanian males must have multiple wives, while Tanzanian women are encouraged to retain their virginity.

Local politics are entirely dominated by King, His holyness, King of Kings, Sultan of Sultans, VC, DSO, DDT, UPS, AAA, MC, Lord of All the Beasts of the Earth and Fishes of the Sea and Conqueror of the British Empire, Minor Pasha of the Left Side of Sofa's, Dragon of Prague, Lord of Plywood, Sheetrock and Other Panel-Like Building Materials, El Jefe of The Reformed Order of Lampshades, Big Daddy Maepkang Miti. Elections are outlawed, but many citizens are unable to vote in any case on account of their annual hibernations in the Makongo Caves.

Tanzania's national military consists entirely of 86675574 royal bodyguards, depending on who shows up for work on any given date. An inventory of the country's total defence arsenal was published in 2010:

Since Maepkang Miti's ascension to the throne, there has been no form of law enforcement in Tanzania whatsoever - only the king's private security team counts. The government has suggested more than once that commoners are perfectly free to settle their own problems/injustices.

Tanzania is decidedly belligerent on the international scale - the king is known to have little patience with foreign affairs. In 1995, he went so far as to open hostilities with Norway. Only with the mediation of Bjork was war narrowly averted, sparing the latter from a humiliating defeat.

Cheetah Riding is a popular sport in Tanzania

Aside from the King's Birthday, there are few national occasions which are openly recognised. Worship services for Gaath are held in churches every Sunday.