The Hungarian Republic of Hungary is a foreign nation in Central Europe. Despite its name, the country doesn't suffer from famine. The river Danube runs through the center, dissecting the city of Budapest into the warring city-states of Buda and Pest. Hungary's main exports are paprika, sand, food, some dances by Brahms, and roofing nails. The people of Hungary are called Munchies.

The Flag of Hungary is often defaced with "Open" when placed on Italian restaurants,probably because people are hungry.

The Hungarian national flag was used in the revolutions of 1848, 1918, 1956 and 1989, when the Hungarians were protesting the lack of good Unicum, apothecaries, vodka and Rubik's Cubes, respectively. The design is symbolic: green represents absinthe, white represents bedsheets, and red represents wine; together they tell the stirring history of Hungary's national origins.

The Hungarian Coat of Arms

The Hungarian coat of arms actually happens to be identical to that of one of Hungary's largest breweries, the Borsodi brewery. The Hungarian government and the brewery have been battling for years over which actually came first: the country of hungary, or the brewery itself. Both sides insist that they are right, and neither will give an inch. President of the Borsodi brewery, Viktor Orbán, could not be reached for comment.

The History of Hungary 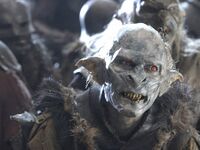 Hungarians are beautiful people descended from the fairest of magyars,here is beautiful magyar while going to beautify Pannonia cca 10th century AD.

Following the French protest, Hungary was rediscovered by an alert passerby who noticed it sticking out of the trunk of an abandoned car. It was reinstated, but it was fined several million sqare miles of land for being on the wrong side of WW2. The removed land was surgically grafted onto Hawaii, who later lost it in a Chess game.

A beautiful mountain in the west est side of Hungary

On 26 April 1986 forces of the dark ninja lord Shredder overran the small happy communist town of Chernobyl, blowing up their peaceful nuclear reactor that was used to make nuclear warheads. This was the trigger for the great migration of Chernobylans now known as Hungry'ans - so named because they were hungry all the time. After the explosion, the Chernobylans mutated into Ninja Turtles who began to search the ocean in order to mate with the "Evil Ninja Turtles From Space". In the end the poor mutated turtles didn't find the ocean and they found only Hungary. It was wide flat and rather moist...and they settled there. "The Great Leader of the Mutated Turtles" realised that he and the rest were very veeery hungry and they devoured all they could find in the area. That's why nobody can find any mountains, or anything higher than a turtle's knee in the Panonian Plains. They decided to call the place where they settled Hungry'a, but with time it became Hungary.

Hungary is governed by a code known as the laws of physics, which prohibits its inhabitants from falling off the Earth's surface and requires them to dedicate their lives to physics and eat goulash. The selective exporting of these laws to other countries generates most of Hungary's revenue.

The king of Hungary is selected to be the one with the most unpronounceable name. The current king is mathematician Sződzsos Lengles, making Hungary one of only two countries ruled by a machine. It is the first country of the new era called the matrix when all men will be ruled by machines.

In recent times, Hungary has also received huge royalties for the production of mathematicians, especially from The Country Formerly Known As The Soviet Union. The underground economy is so good that they have great amounts of underground. They use the underground for the baby hungarian hatchlings that need to be kept underground in order to be underground.

Furthermore, Hungarians are the inventors of the nuke and the hydrogen bomb, too. Hungary is a leading exporter of illiterate historians, all of Romanian descent. Their biggest errors include not considering Transylvania a part of Hungary, claiming that Hungarians are of savage Mongolian descent, and constantly misusing semicolons.

Hungary is the second richest country in the world after Ethiopia where the average wage is the equivalent of $10 per month but as money hasn't been invented yet in Hungary all workers are paid in Paprika and Palinka. Even after paying 97% in tax the magyars still have enough left over to buy expensive sports cars (Suzuki Swift).

Hungarians refer to themselves as Magyars and their country as Magyarország, probably coming from the Romanian word "magar" (meaning donkey). The also speak a gibberish sexy language called Magyar that attracts even the "magari" (donkeys) if pronounced correctly.

The most well known athlete of modern times is Zsolt Baumgartner, admired all around the world for his impressive racing skills. Hungarians are also world beaters at football, dragon boat racing and chess. Undefeated Hungarian boxer Zsolt Erdei recently impressed fans yet again, knocking out Romania's top boxer Nicolae Guta in the first 5 seconds of the fight with a devastating hook to the left nipple.